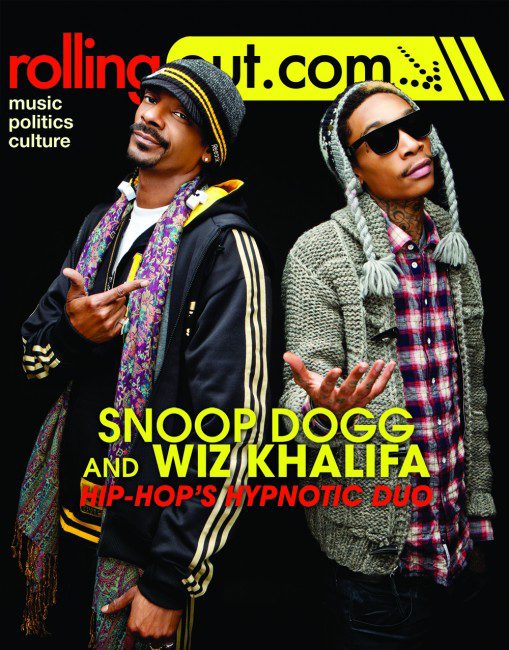 Collaborative rap albums often occur for several reasons. Either record labels are seeking to force prominent acts into performing together to generate a quick buck, or the artists are truly inclined musically to work with each other and desire to create an exceptional piece of work. Snoop Dogg and Wiz Khalifa’s collaborative album and movie stem purely from their love of each other’s music and marijuana.

After Snoop Dogg appeared on the remix to Wiz Khalifa’s monster hit “Black and Yellow,” the weed aficionados planned a bigger venture. While delving into a few herbal remedies, Snoop Dogg and Wiz Khalifa began exchanging ideas for a film project and a soundtrack. Within a year, the duo developed the film Mac and Devin Go To High School and accompanying album, which includes 13 songs.
Currently, on tour, Snoop Dogg and Wiz Khalifa have taken their hypnosis-inducing show on the road while galvanizing music and marijuana lovers across the nation.

Snoop Dogg and Wiz Khalifa recently sat down and revealed the story behind their new projects, their thoughts on the legalization of marijuana, and talked openly about how they are inspired by each other.

It’s not unusual for hip-hop fans to get excited when two top-notch rappers collaborate. What makes this connection special?
Snoop Dogg: It’s organic. It’s not forced. No one called Wiz and told him to do it and no one called me and made me do it. We did it because we felt like it was the right thing to do. It was the fans who embraced it as something that we’re supposed to be doing. We both know [there’s] a natural connection.

There has to be mutual respect to bring both of the camps together. How are you guys inspired by each other?
Wiz Khalifa: Snoop’s work ethic. He continues to always work. People always talk about rap legends and give them accolades. Snoop is still going and he’s the only artist still going hard. He keeps it like that. No one is making it happen for him or telling him to do that. It’s him doing that and staying consistent.
Snoop: I’m inspired by Wiz’s spirit. He makes everyone feel as if they are a part of his situation. He has the right mind to lead. He leads with precision. To know that you’re a leader, you have to give them something to follow. He takes his time with what he does. He had my entire house in love with him. My family was excited that we were working together from day one.

You guys don’t hide your love for marijuana. What are your thoughts on the potential legalization of marijuana?
Snoop: We want it to be legal because it does a lot of good for people. It helps in different medical situations. Drugs such as alcohol and tobacco kill more people annually than marijuana has killed in 20 years. If we can legalize it, tax it, and sell it out of the front door instead of the back door, we could probably eliminate some of the problems that we’re having in America.

Do you believe that a lot of people who are caught with marijuana are given prison sentences that are too harsh?
Snoop: You have a lot of white celebrity females who have been caught with cocaine numerous times and they get a slap on the wrist. They’ll get 10 days in jail or rehabilitation. And cocaine is a controlled substance. It’s a drug that can speed your heart rate up. I sold cocaine for years, so I know the effects of it. You have someone who sells weed and they’ll get three or four years. … Some laws are made for blacks and some laws are made for white people.

What do you say to people who may believe that you are promoting its use?
Snoop: We push having a good time with ourselves and not pushing it on you. We celebrate marijuana because of the joy it brings us. Our relationship was us enjoying that first. Once we put one in the air, we could talk about anything.
Wiz: Some people take a little here and there. Whatever gets you by. We don’t encourage marijuana use for people to be doing what we’re doing. We celebrate it because of how it makes us feel.

Both of you guys have been able to brand yourself outside of hip-hop without losing touch. How important is that balancing act?
Snoop: That’s the most important part of what we do. We make sure we stay attached to where we started from. … People up top only want you because you’re hitting from the bottom. They don’t want you because you’re hitting up top. You’re down low and you can reach the people they can’t. That’s the audience you need even after you make it. When you had no audience, that’s who gets you the most attention. When you have no name, that’s who you go to. When you have no brand, that’s who you go to, because they will build you up. The people at the top want to get you because of the audience that respects you. That’s why we stay attached to where we come from.
Wiz: It’s different for me as a young artist because I’m learning and going through it. From dropping my mixtapes and albums, I’m learning how to be that guy who can keep the label satisfied without sacrificing who I was before the deal. Snoop has done it for years, and that’s why he’s still here. It’s a work in progress for me, but the focus is to always stay with the people who put me where I’m at.

What’s the greatest thing about hip-hop?
Wiz: Hip-hop is about making something out of nothing. I’m a regular kid who rode the bus and went to school. I don’t have any rich family members. I didn’t have any connection to the industry. Through my passion, I was able to take the most minimal of resources and build an empire. To be able to touch people across the world and have people who understand your struggle — it comes from the smallest things. You don’t have to be in the biggest studio. It’s usually what you do by yourself and with the least of things that makes it always workout. That’s the best thing about hip-hop.
Snoop: [The] greatest thing about hip-hop is that you can treat it like a plant and grow it. You can take a seed and put it in the ground and you can water it. It can have your flavor, your style, your demeanor, and your look. It can be catered to you. Whether people love or hate it, it’s alright. That’s what hip-hop does. It makes people uncomfortable. At the same time, it puts people in the right space when they do it the right way. It’s a seed that can grow, and it’s all yours.