There’s only one solid explanation the “America’s Got Talent” judge Heidi Klum gives for her topless photos in Bora Bora.

“I’m European,” she said in an interview with “Extra.” “I don’t like wearing tops. And I don’t like tan lines.”

The 40-year-old’s risqué vacation photos have been heating up social media users — on both Twitter and Instagram. The pictures featured Kulm topless and bare-bottomed.

And to top it all off, Klum’s photographs were taken by her mother, Erna.

“I grew up running around topless, and I still do,” Klum said.

This hot blonde doesn’t seem camera shy when it comes to taking risqué photos. Check out a few other celebrities who don’t mind showing social media users what they’ve got either. 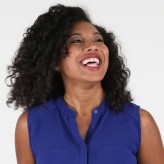