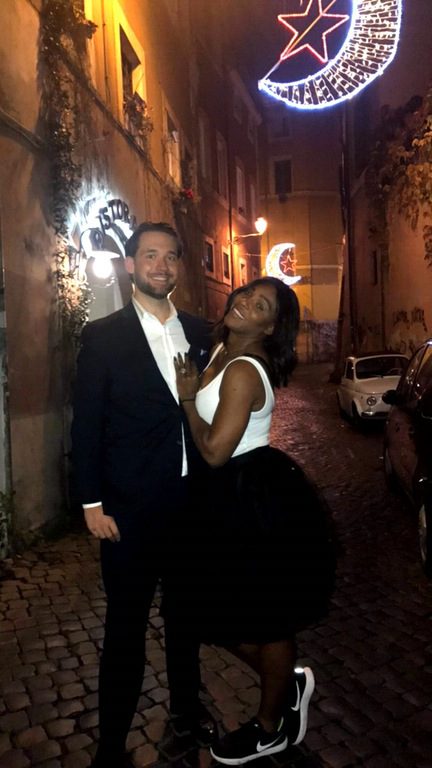 Serena Williams is entertaining fans with an official look at her engagement sparkler.

The newly engaged tennis champ stepped out this week for a date night with fiancé Alexis Ohanian — only it wasn’t her Kodak smile that got shutterbugs excited. Stepping out in a sporty look, consisting of a white top paired with a black high-waisted skirt and matching Nike kicks, the 35-year-old flaunted her gorgeous diamond ring, which we haven’t actually seen (except for in the form of a taco) since the news of her engagement.

Sneak peek. ❤️It was a corn tortilla of course in case you were wondering.

In case you missed it, earlier this week, Williams hilariously trolled fans with a “sneak peek” of her massive sparkler.

Oddly enough, the very same taco ring made a second appearance shortly after Williams went live with her megawatt ring via Reddit. “Can’t resist a strong shoe game #nike,” she wrote via Instagram, alongside a seemingly identical photo — swapping out her diamond for a taco. Jokes!

In late December, Williams and the Reddit co-founder, 33, sent social media into a tizzy when they announced via Reddit that they are headed down the aisle. “I came home/ A little late/ Someone had a bag packed for me/ And a carriage awaited,” she wrote. “Destination: Rome/ To escort me to my very own ‘charming’/ Back to where our stars first collided.

“And now it was full circle/ At the same table we first met by chance/ This time he made it not by chance/ But by choice/ Down on one knee/ He said 4 words/ And I said yes.”

Meanwhile, Ohanian responded to the post, sweetly writing, “And you made me the happiest man on the planet.”

Congrats again to the happy couple! Show them some love in the comment section below.