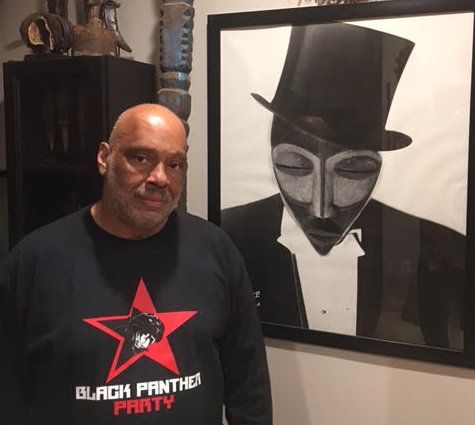 Danny Simmons is among many Philadelphia artists and arts organizations brimming with anticipation of a renaissance in the city. New things are happening, new people are coming, many of whom are leaving other places and moving to Philadelphia for good.

We sat down for an exclusive interview with the neo-African abstract expressionist painter at the beautiful Northern Liberties residence for which he recently swapped his Brooklyn brownstone. The comic book enthusiast and action figure collector is happy to live near one of his favorite new hangouts, Amalgam Comics & Coffeehouse, and he has developed a friendship with owner Ariell Johnson.

“Philly has become sort of a magnet, I think, for artists trying to find a central location not far from the hub of New York City, but that’s more affordable and that’s arts-friendly,” said Simmons. “It’s a slower pace than New York, but there always seems to be something to do … I thought it would be comfortable because I knew a few people here, but it is even more comfortable than I imagined.”

But he’s not too comfortable to shake things up. Simmons took a trip to Philly with the intention of opening an art gallery and expanding New York’s Rush Philanthropic Arts Foundation, which he started with one of his famous little brothers Joseph “Rev. Run” Simmons. Knowing that having it done right would require his direct involvement, Simmons decided to become a local and commit to actively nurturing relationships to build Philly up in the communities that needed it most. This was at the front of his mind when he asked his real estate agent where he could find a building for his art gallery in a neighborhood that would benefit from it.

“There’s a vibrant cultural scene in [nearby] Fishtown and Northern Liberties … places to go and things for people to do on a cultural level,” he explained. “I’d just be one more person over here doing something — it’s not going to make much of a difference in the community. One of the things I wanted to do was come here and not only make a difference for artists but make a difference in the community. This is a multicultural neighborhood, so the kids have resources over here.”

They didn’t have them in the Logan community, where he and the realtor arrived after looking around North Philly and West Philly. At first, they found a nice little store with two apartments and enough space to make it an art gallery, albeit a little smaller than he was looking for. He went looking around the neighborhood, and a block away was an old bank building for sale. It was more money than he would have spent on the other property nearby, but it had much more potential.

“There’s a vacant store right next door that is a part of the building that I purchased,” Simmons said. “We’re going to open an artist in residency program that’s targeting artists who do things involving social reforms. I just got two powerful artists to be on the advisory board — Hank Willis Thomas, and Dred Scott — and they’re both very involved in social justice.”

This space is in addition to the studio of Al Johnson, another artist who came from New York, on the second floor of what is now known as Rush Arts Philadelphia. In the short time Danny Simmons and Rush Arts organization have been in the city, he is already bringing positive change and opportunity to Philadelphians as well as artists in the region.

“We try to make sure there’s a nice balance of Philadelphia artists and artists from the region, which would include New Jersey, Delaware, and then some New York artists to create a space that encompasses just this area and focuses on bringing this area together as a place that’s known for producing art and producing artists,” Simmons explained.

He looks forward to working with Amalgam, once the Rush Philly youth program is up and running, to bring children there and help them create and display their own graphic novels. Simmons also mentioned a new program he is starting in partnership with the Barnes Foundation and Art Sanctuary. Any Philly artist can apply for the program where selected finalists receive critiques from professional artists before an audience at the Barnes Foundation space in Center City. The audience votes on the work, and the winner gets to have a solo show at the Rush Arts gallery in New York.

Rush Arts Philadelphia recently concluded its first exhibit, “Guerrillas in the Midst: The Art of Revolution,” curated by Simmons and Jamal Ince — featuring the works of Rico Anderson, Kennis Baptiste, Bisa Butler, Momar Clemons, Francks Deceus, Willis Humphrey, Laura James, Keir Johnston, Ernel Martinez, Navin Norling, Dr. Jide Ojo, and Jean Patrick Icart-Pierre – before taking a break for the holiday season. Check out some of those compelling works and Simmons’ own private collection of art and artifacts, in the gallery below. 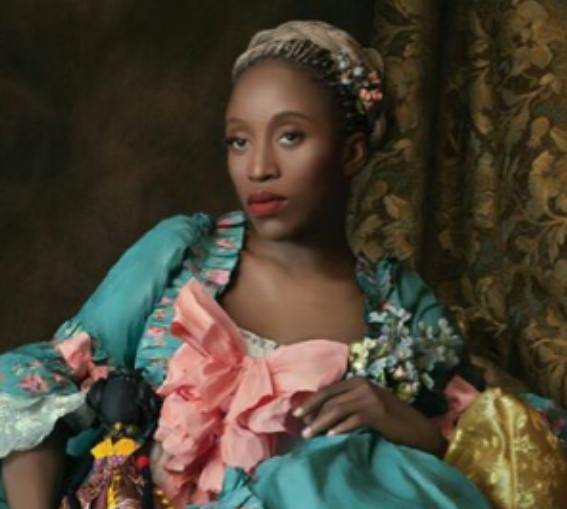 “American Hoodoo is going to feature artists that look at spirituality and magic in art and try to recreate that in the art that they do,” Simmons revealed. “What I’m interested in exploring as the curator of this is how contemporary art by contemporary artists can also be a conduit to spirit, the magic realm, the ancestors, and all of that.”

As we sat on the second floor of his home, Simmons was not only referring to the art that would soon be on display in his gallery, but also directly referencing and gesturing toward the vast collection of art and objects from indigenous (mostly African) cultures that surrounded us. His interest in African art started with his interest in painting and modernism. When he studied Picasso and other artists of the genre, he came to realize so much of it was appropriated from the African art that informed his early paintings.

He doesn’t usually hang his own work in his house, opting to buy or trade his stuff for that of his contemporaries – often early on before they become famous. After 20 years of collecting, it is all over the house, not just this room. The avid collector and anthropology buff understands that many of the masks and other artifacts are not just art – they are pathways to the spirit.

“One of the things that is important to me, besides the physicality of the sculptures here, is the spirituality I get from this,” Simmons explained. “I mean I can just sit in this room and be renewed and refreshed. These are all objects that have been used by these people, and there is some sort of spiritual residue that still relates to the objects. So it is very uplifting to just sit amongst my stuff…It gives me something that sends me upstairs and allows me to create.”

(*“At my request Dr. Bryan made inquiries of the Negroes about the Voodoo sorcerers, and was told they held meetings in Philadelphia, at which they performed horrid rites, and that they were able to make themselves known to each other by secret signs.” This statement was taken from a short note by pioneering ethnographer Stewart Culin entitled “Voodooism in Philadelphia,” which appeared in “The Journal of American Folklore” in 1889. He paraphrases an exchange with Dr. H. N. Bryan of Philadelphia. The term “Voodooism” was common among White outsiders trying to describe conjuring, rootwork, or hoodoo, by Black Americans. The “ism” suffix indicated that what was being described was not Haitian or African Voodoo/Vodun.)

Our conversation ventured into the intersections of politics, art, religion, revolution, and how the first two exhibits at Rush Arts Philadelphia are connected.

“In setting up slavery, making it an institution, and then post-slavery, one of the things to keep a people oppressed is to take their religion away from them, so that was done,” said Simmons. “They created this myth that Africa was uncivilized. All the civilizations on the face of the earth were in Africa, but this is what we were told about anything that had to do with Africa, anything that had to do with our religions. ‘This is primitive. This is bad. This is evil.’ And we went for it because it was centuries of this type of indoctrination.”

Per a statement released by co-curator Shantrelle P. Lewis, “There has always been much confusion and misinformation about the spiritual practices consistently acknowledged and maintained by the descendants of enslaved Africans geographically situated in the United States of America. Hoodoo, according to Dr. Katrina Hazard-Donald ‘is the folk spiritual controlling, and healing tradition originating among and practiced primarily, but not exclusively, by captive African Americans and their descendants primarily in the southern United States.’ With its own musicology, dance forms, herbal medicine, and functional practicality, Hoodoo is indeed a liberatory technology that has long time been embraced and utilized by Black folk for healing, power and freedom.”

Danny Simmons and his foundation have become part of the fabric of the community as he partners with other leaders to boost cultural and economic development in Philadelphia. Rush Arts Philly is located at 4954 Old York Road, Philadelphia, PA 19141.

Listen to “My John the Conqueror Root” by Muddy Waters as you check out the gallery. 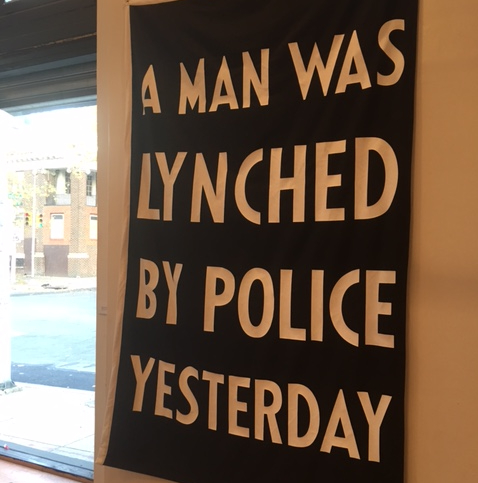 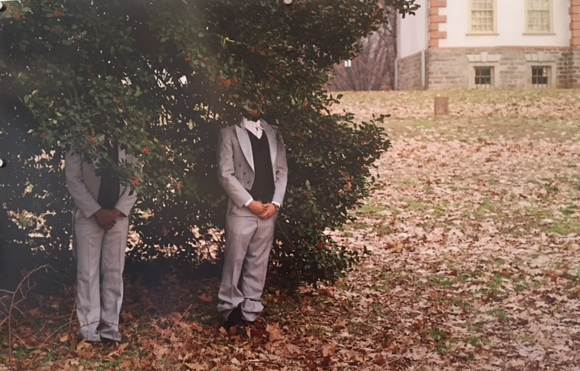 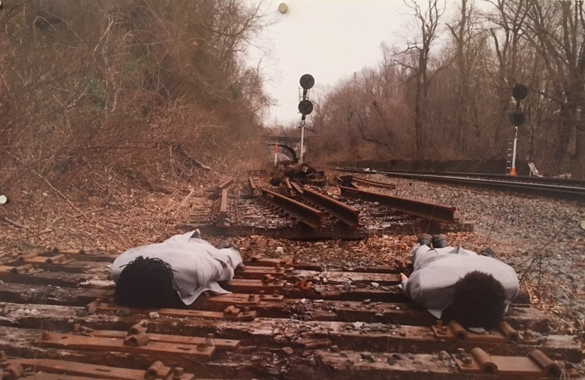 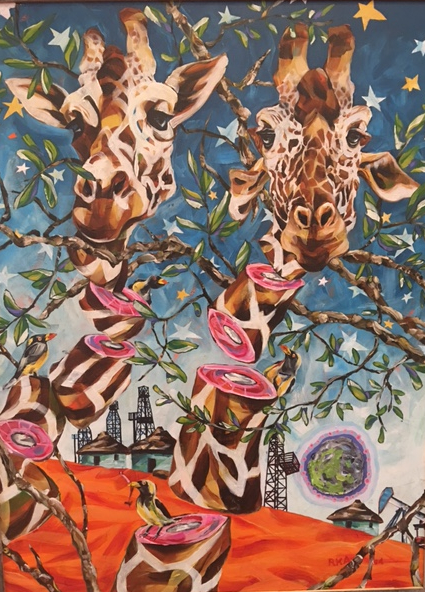 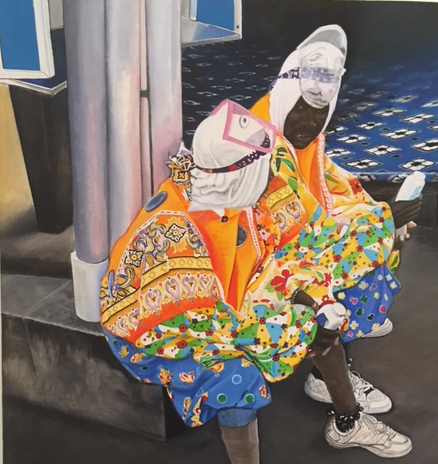 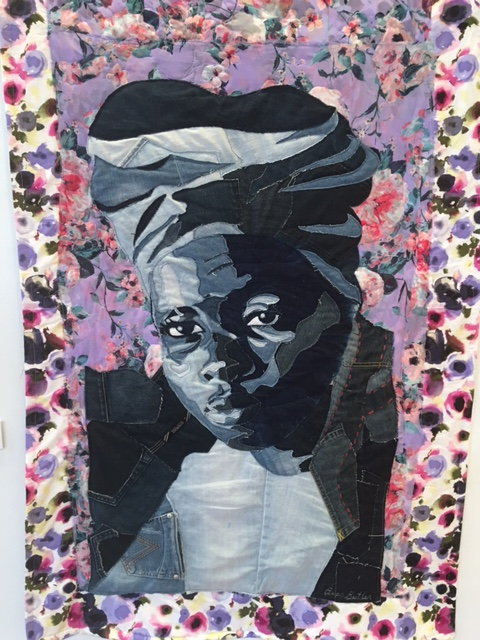 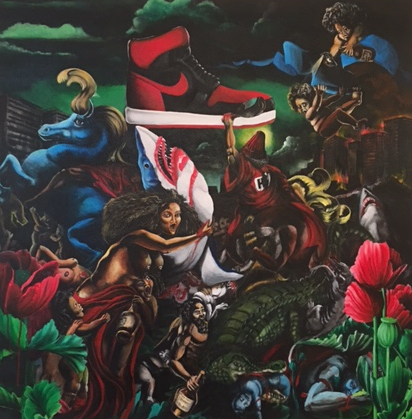 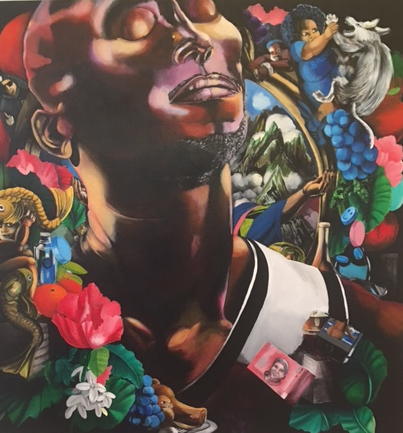 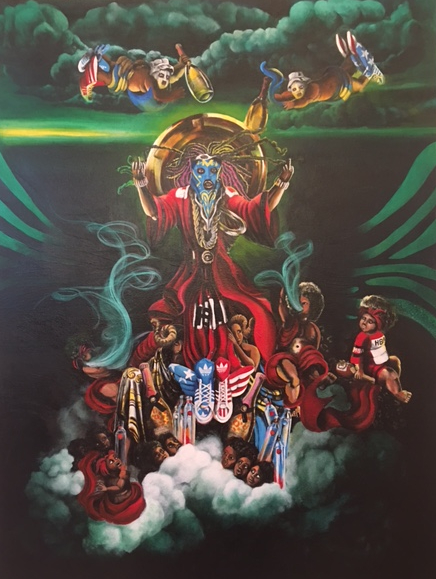 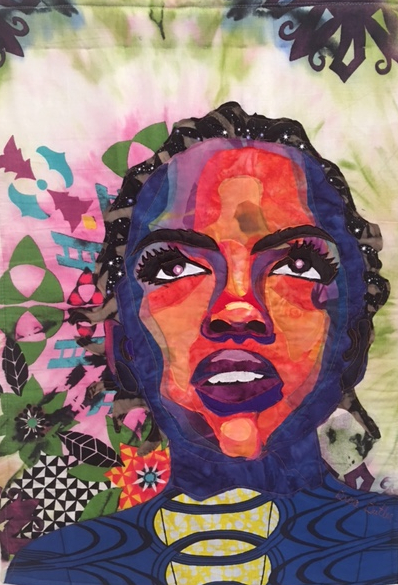 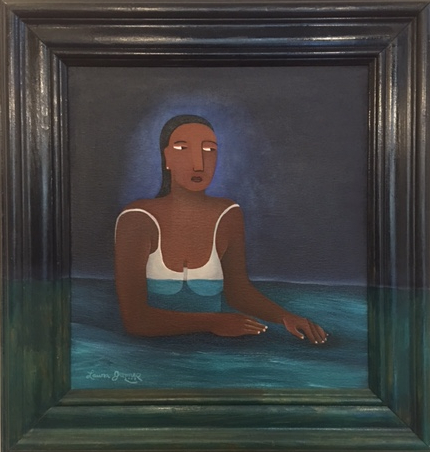 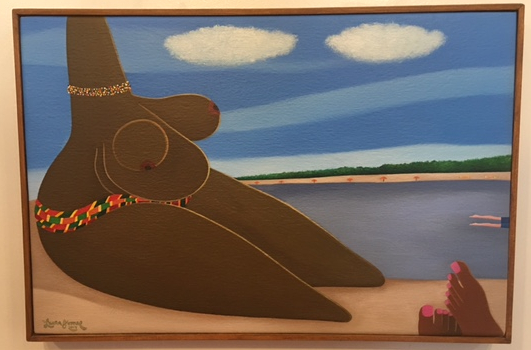 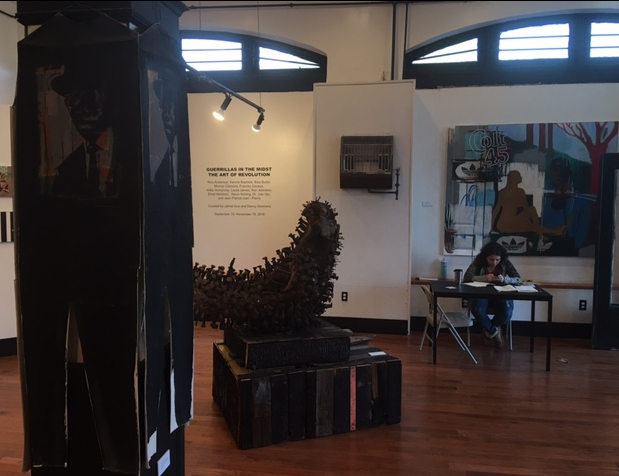 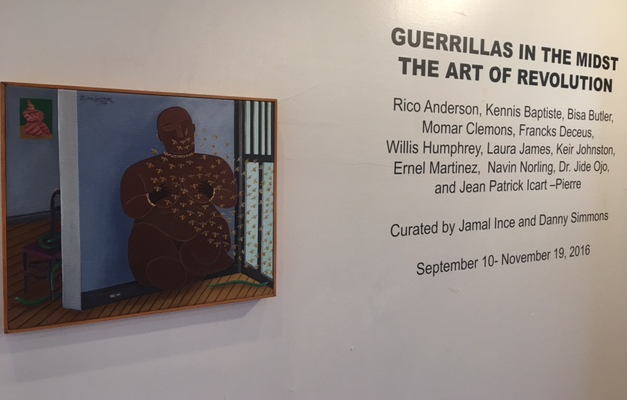 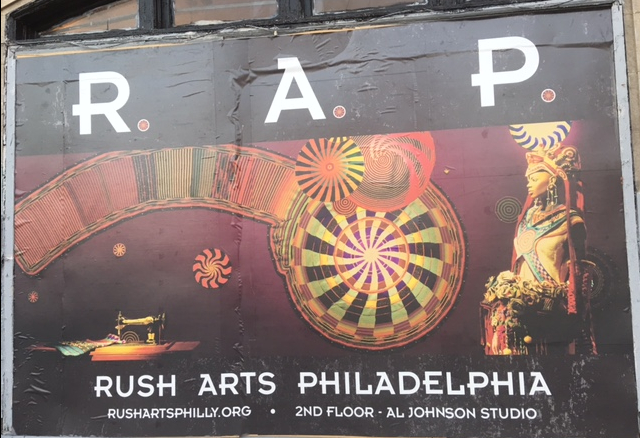 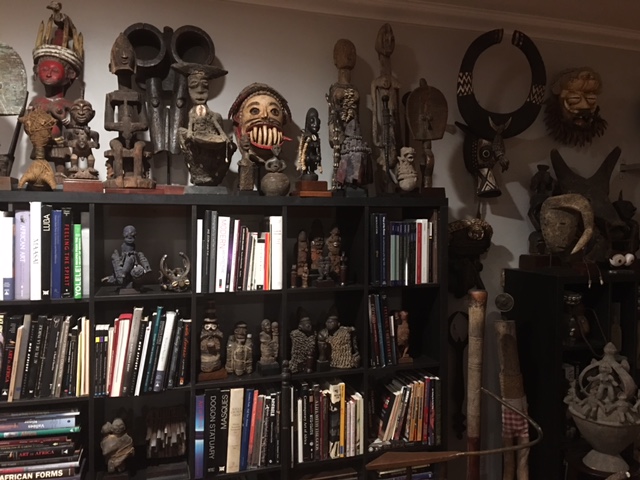 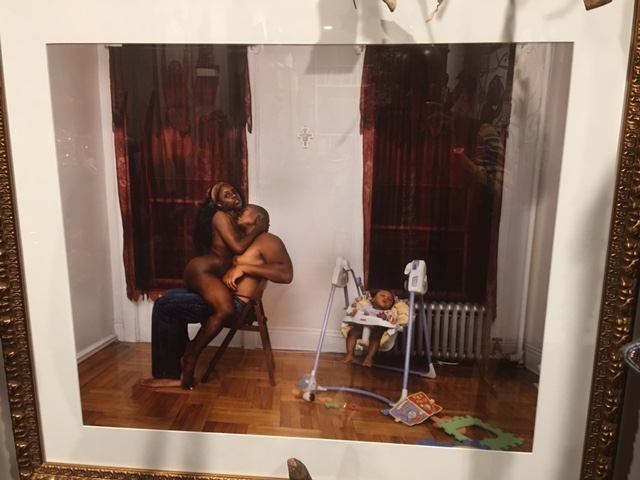 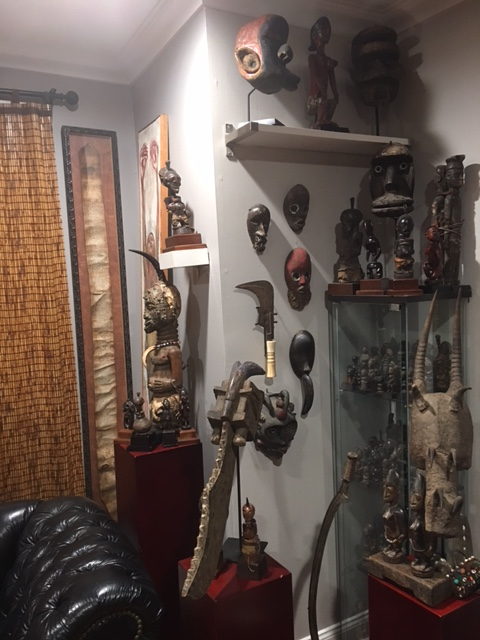 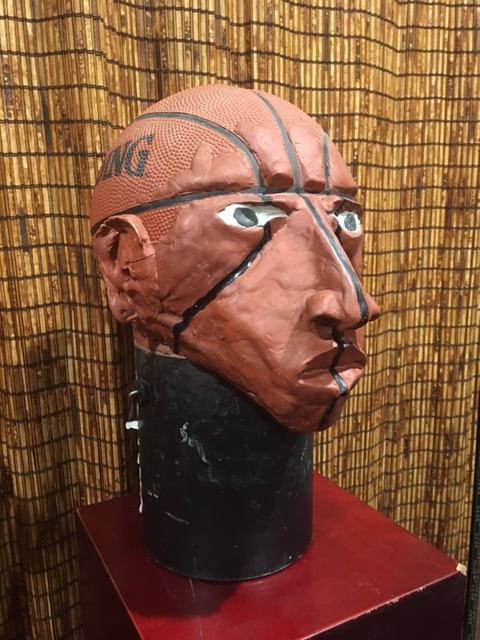 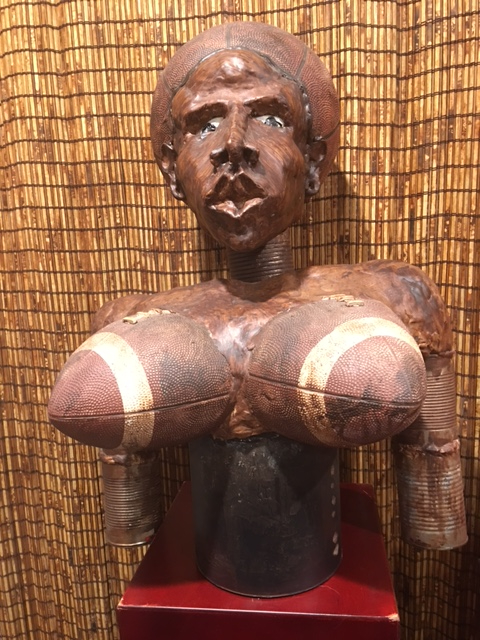 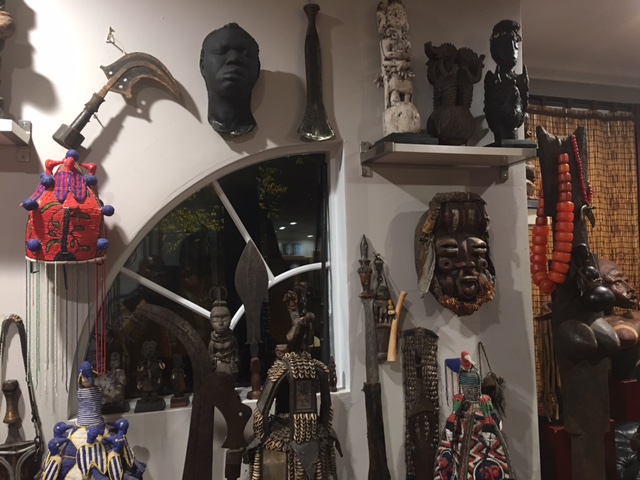 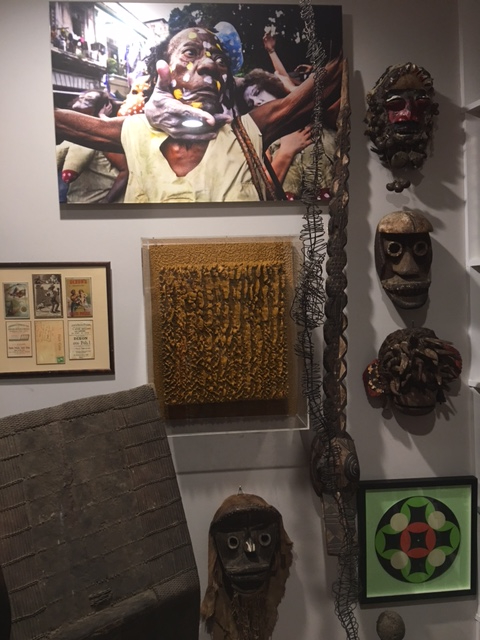 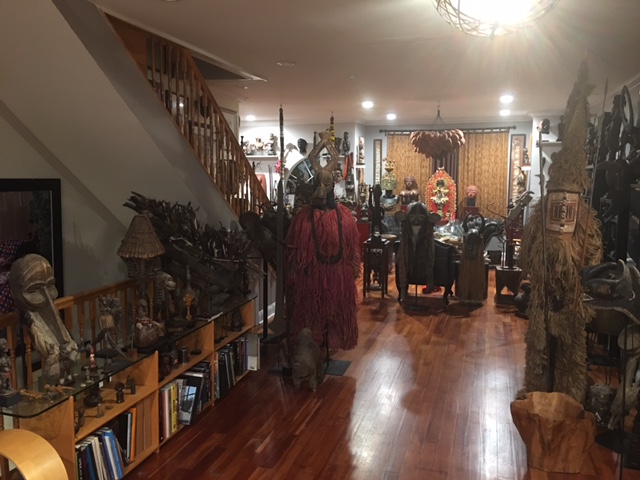 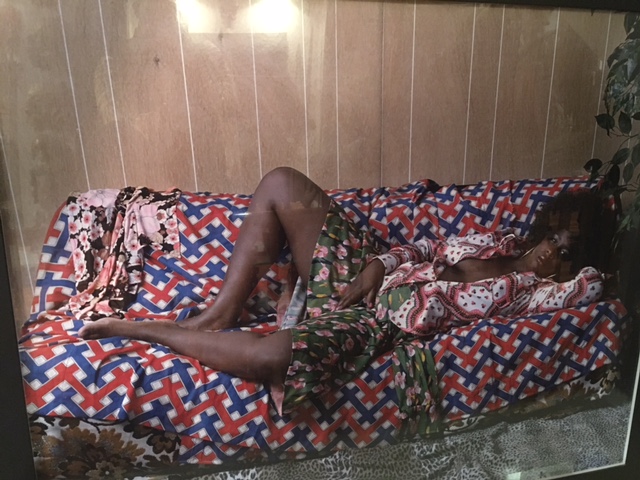