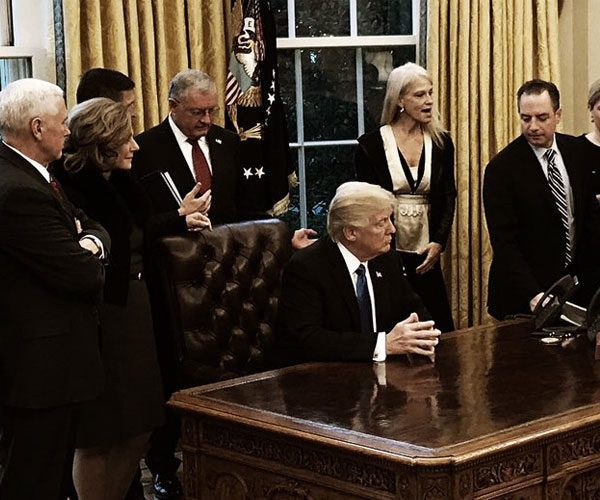 President Donald Trump this week issued an unprecedented executive order on immigration that has had global impact. Trump’s order barred entry of all refugees to the United States for 120 days, barred Syrian refugees indefinitely, and blocked entry into the United States for 90 days for citizens of seven mostly Muslim countries. The countries affected were Iran, Iraq, Libya, Somalia, Sudan, Syria and Yemen. In addition, the order prohibits green card holders from those countries from re-entering the United States. The impact was immediately felt as thousands across the world were suddenly denied visa applications at exit points in various countries. The order has stopped regular business travelers, students, families and individuals from entering the United States. So far, as many as 200 people were detained at US airports.

Within hours of the order being signed at 4:42 p.m. Friday, it was challenged in court by two Iraqi-American lawyers. Lawyers sued the government and at 9:00 p.m., Friday, Judge Ann M. Donnelly of Federal District Court in Brooklyn, who was nominated by former President Barack Obama, ruled that implementing Trump’s order by sending the travelers home could cause them “irreparable harm.” She said the government was “enjoined and restrained from, in any manner and by any means, removing individuals” who had arrived in the United States with valid visas or refugee status. A short time later, Judge Leonie M. Brinkema of Federal District Court in Virginia, issued a temporary restraining order for one week to stop the removal of any green card holders being detained at Dulles International Airport.

The rulings by these judges reflect a growing legal concern that President Trump’s use of executive orders is illegal and perhaps even unconstitutional. The order allows exceptions to be made for persecuted Christian refugees in countries where they are in the minority. The blatant barring of Muslims is not expressly written in the order but it can easily be seen that the order is targeting this group of refugees. Trump inserted language that explained the basis of the order was over terror related events after the 9/11 attack. The hijackers in the 9/11 attacks were 19 men linked to al-Qaeda. Fifteen of the 19 were citizens of Saudi Arabia, and the others were from the United Arab Emirates, Egypt and Lebanon. But these countries are not listed within Trump’s order or even mentioned. As a point of fact, National Public Radio commentator Greg Myre wrote recently, “No Muslim extremist from any of these places has carried out a fatal attack in the U.S. in more than two decades.”