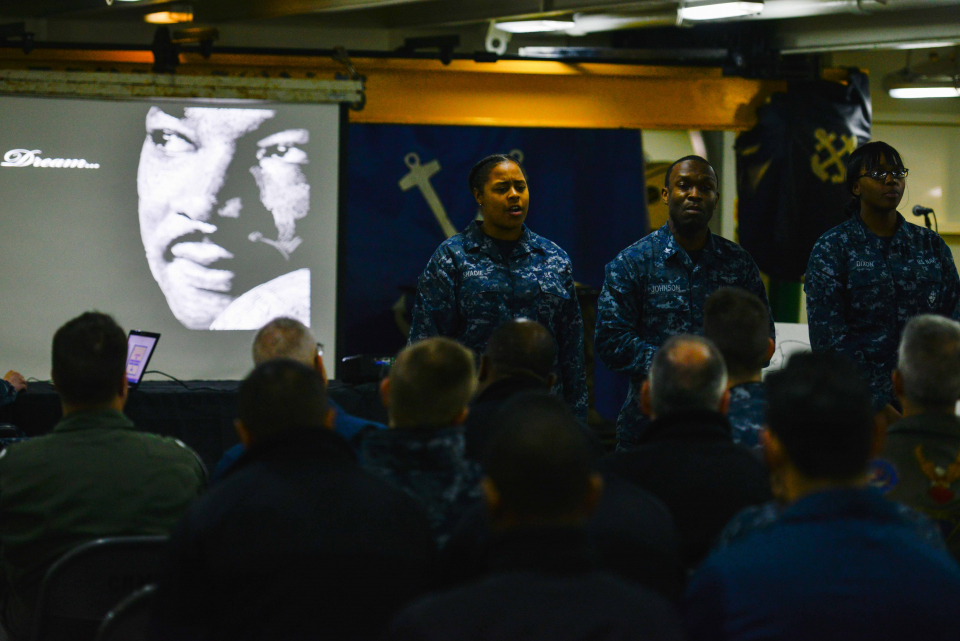 Throughout the month of February, the Navy joins our nation in celebrating the history and culture of African American and Black Sailors during National African American/Black History Month.

ALNAV 006/17 encourages participation in all the heritage celebrations and special observances throughout the year. Sailors and Navy commands are encouraged to use this month to celebrate and recognize the exceptional and distinctive contributions and the unique histories and cultures that African American/Black shipmates bring to the Navy.

This month’s observance has its origins in 1915 when historian and author Dr. Carter G. Woodson founded the Association for the Study of Negro Life and History. Dr. Woodson and the association initiated the first Negro History Week in February 1926. Every U.S. president has officially designated the month of February as National African American/Black History Month since 1976.

“The greatest strength [of] our Navy comes not from weapons but from the diversity of our people,” said Rear Adm. Stephen Evans, commander, Naval Service Training Command. “Every day, sailors of diverse race, gender, religion, ideas, and background work together to accomplish the extraordinary.”

In the Navy’s civilian workforce, 15 percent are African American or Black and 20 percent are senior executive service members.

A diverse workforce positions the Navy to operate successfully around the globe by bringing together sailors and civilians with different ideas, experiences, perspectives, capabilities and skill sets. Integrating sailors and civilians from diverse backgrounds into the force allows the Navy to recruit and retain the nation’s top talent from a wider pool of skilled personnel.

“The call to serve our great nation comes with a responsibility to push yourself to be at your best, to be ready,” Evans says in a statement to the press. “Training and education are vital to readiness, which is why we strive to attract talent from diverse pools of future leaders and provide them the highest quality naval accession training.”

The Navy partners with organizations including the National Naval Officers Association, the National Society of Black Engineers, and Historically Black Colleges and Universities in support of African American service members and civilians. The navy supports science, technology, engineering, and math (STEM) programs encouraging young minority students to pursue careers in science and industry.