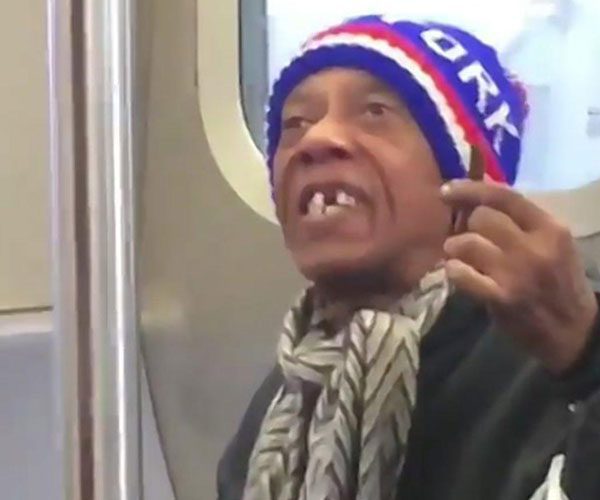 Recently, images of a homeless and legless woman smoking a marijuana blunt on an NYC subway went viral. The woman, later identified as Michelle Carter, 60, expertly rolled a blunt and began puffing away to the amazement of passengers.

Fellow passengers began to harass the woman as she tried to enjoy her weed, calling her a b—- and one young man stated, “I’m decking that b—-.” Carter sang incoherently as she was mocked and the train stopped at a station. It was obvious to many on the train that the wheelchair-bound woman was suffering from some type of mental illness.

It turns out that just a few years ago, Carter was a millionaire and her money was tragically stolen.

In 2005, Carter fell on the subway tracks and was hit by a train, losing both of her legs. She later sued the NYC Transit Authority and won a multimillion-dollar settlement in 2014. She reportedly was not very wise with her newfound fortune. In 2015, she received another major blow. Someone had fraudulently cashed a settlement check in her name for $886,339.96 and she found herself living off and on with family and on the streets. She is now suing JPMorgan Chase bank for cashing the stolen check.

“I was shocked that they cashed that check without any due diligence. Many times I have written out settlement checks for $10,000 or so, and the banks wouldn’t cash them without checking everything out,” said her lawyer, Robert Unger.

Carter’s lawyer went on to call the video of Carter being verbally abused deplorable and stated that his client is unable to care for herself and suffers from mental illness. JPMorgan Chase bank has not issued a statement regarding Carter and the lawsuit.