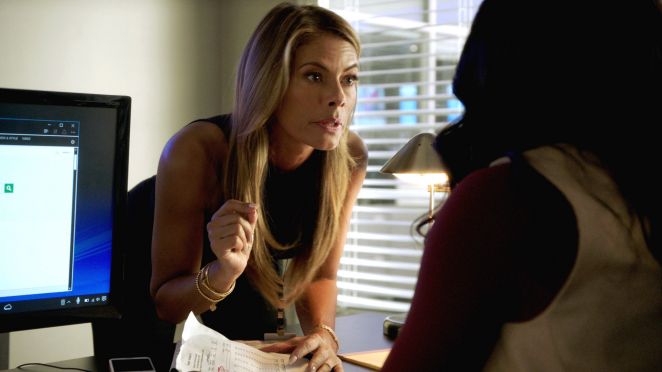 Last night’s episode of “Being Mary Jane” turned the heat all the way up and tackled a touchy subject for many couples. Mary Jane’s producer Kara was enjoying her new boy toy until she realized that he was all performance and no passion. Kara suggested her new friend approached intimacy from a mechanical standpoint and it left her less than satisfied. “I can see him counting the pumps,” she complained to Mary Jane. “There is no passion.”

Instead of faking her satisfaction like many women, Kara took the mature approach and decided to teach him how to please her. In one of the hottest scenes this season, Kara brings a split peach to bed and instructs her partner to remove the pit without using anything but his tongue. Suggesting new bedroom etiquette to a man takes patience and charm. You don’t want to crush his ego, but you need to make sure that you put a stop to anything that isn’t bringing you pleasure.

We posed the question on Twitter and several men chimed in agreeing that women should take the time to tell their partners what they are doing wrong. User @adam31008 was one of the men who insisted he would want to know if he was doing something wrong. “I would want to know, can’t get better if you don’t know,” he tweeted.  @Plot_Louiesosa agreed, “I would love to know. Never really had too much of an issue but criticism is appreciated.”

For the writers of BMJ to show a woman taking control of her sexual experience is to be applauded. Too many women are taught that sex is something they don’t control when it comes to their partner’s performance. Protecting their partner’s ego often eclipses their own sexual needs or desires. In last night’s episode, although Kara’s partner was disappointed to hear she was unhappy with their intimacy, he rose to the occasion (no pun intended) and the end result was a much more satisfying experience for them both.