Omarosa Manigault participates in a panel discussion at the National Action Network convention. She is a former apprentice and associate of Donald Trump. (Photo Credit: Evan El-Amin/Shutterstock.com)

The Trump administration has been very vocal about its media critics since President Donald Trump’s campaign. Various Trump surrogates have claimed journalists are peddling fake news stories whenever Trump is caught in a lie or defects in his leadership are uncovered. Now one longtime White House correspondent is claiming that she was physically threatened by Director of Communications for the Office of Public Liaison Omarosa Manigault outside the Oval Office. 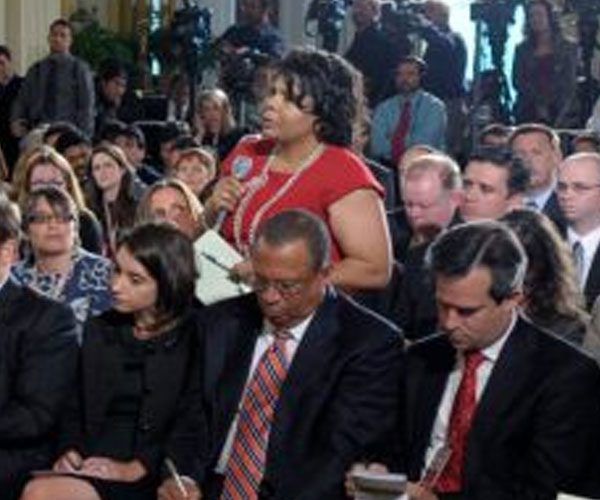 According to April Ryan, a longtime presidential correspondent for the American Urban Radio Networks, the incident occurred last Wednesday.  Ryan stated to the Washington Post, “She stood right in my face like she was going to hit me. I said, ‘You better back up.’ . . . She thought I would be bullied. I won’t be.”

The encounter was observed by fellow journalist and Washington Post correspondent Abby Phillip. She did not hear all of the encounter but she stated to media that Ryan felt that the incident was becoming so heated and menacing that it was “Secret Serviceable,” implying that White House security detail should have become involved. In addition, Ryan claims Manigault told her that the Trump administration was compiling dossiers on Black journalists who have posted unfavorable articles about the president. A claim that has been echoed in part by senior White House aide Kellyanne Conaway.

Ryan feels that Manigault’s behavior is part of a plan to discredit her and threaten her career. During the heated presidential campaign, a list was compiled by the Clinton campaign of journalists that they were targeting for favorable coverage. It was implied that some of the journalists on the list were paid by the Clinton campaign and Ryan’s name appeared as a targeted journalist. When the news broke, Manigault sent an email to Ryan that stated, “This story suggests that as a reporter, you are (or were) a paid Clinton surrogate. I pray this is not true! This could be hurtful to your legacy and the integrity of your work.” She then sent another email that read, “Protect your legacy!! You have worked too hard to have people question your ethics as a journalist. People talking trash about the reporters on that list having NO integrity. It’s hurtful to hear people say those things about you.”