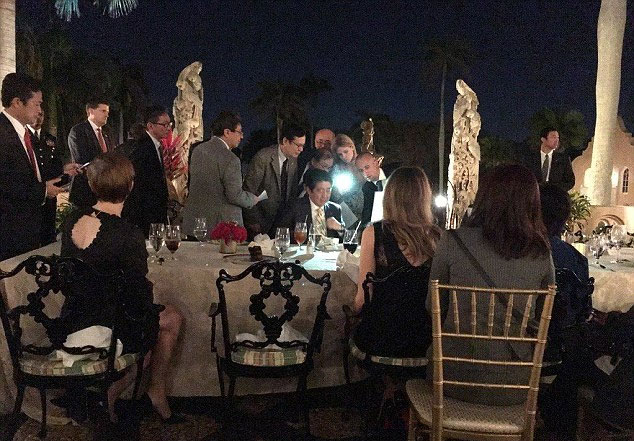 The media has been unwavering in the criticism of President Donald Trump and his displays of narcissism. Trump himself has not helped matters with his rhetoric concerning the size of his inauguration crowd and statements that he is perhaps one of the “smartest” men in the world when it comes to dealing with foreign powers. But his most recent display of power has many pundits stating that he may have openly displayed national security matters in a public setting.

Trump was playing host to Japanese Prime Minister Shinzo Abe at his massive private resort Mar-a-Lago in Palm Beach, Florida. The two leaders were having dinner in the resort dining room surrounded by club members who were in awe of their presence. During the meal, Trump received word that rouge nation North Korea had test-fired another nuclear-capable missile that crashed into the Sea of Japan. Rather than move to a secure location to discuss the matter with Abe, he discussed what the two nation’s response would be in earshot of diners and cell phones.

Documents were spread on the table as presidential aides used the lights on their cell phones to assist the president and Abe in reading. Club members also took pictures and posted comments to social media over the encounter. One person present was Richard DeAgazio, who posted to Facebook: “HOLY MOLY !!! It was fascinating to watch the flurry of activity at dinner when the news came that North Korea had launched a missile in the direction of Japan.” He also wrote in a picture caption, “Prime Minister Abe of Japan huddles with his staff and the President is on the phone with Washington DC. the two world leaders then conferred and then went into another room for a hastily arranged press conference. The wow…..the center of the action!!!” 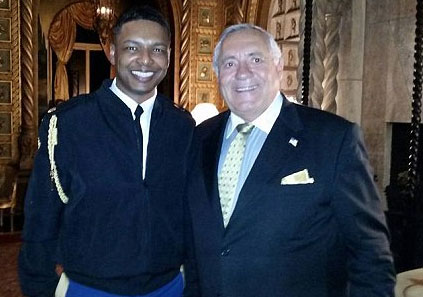 In a further breach of national security, DeAgazio took a picture with a military aide identified as Rick, who was in control of what is known as the nuclear football. These are the necessary commands that the president needs to launch a nuclear strike during times of war. The casual identification of the military aide has caused concern among many and could result in removal from his assignment with the president. The pictures from Mar-a-Lago soon went viral and DeAgazio’s Facebook page can no longer be found.