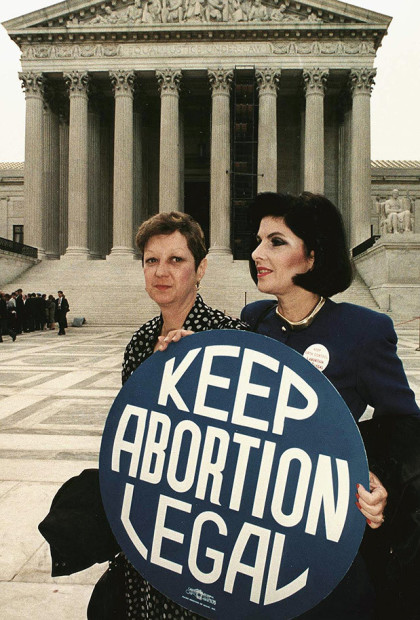 This file photo shows Norma McCorvey(L) formally known as “Jane Roe”, as she holds a pro-choice sign with former attorney Gloria Allred (R) in front of the US Supreme Court building 26 April 1989, in Washington, DC,  just before attorneys began arguing the 1973 landmark abortion decision which legalized abortion in the US.

Norma McCorvey, who was anonymously known as Jane Roe and the plaintiff in Roe v. Wade, died on Saturday, Feb. 18. 2017 in Katy, Texas. She was 69 and died of heart failure in an assisted-living home.

The landmark Supreme Court ruling that legalized abortion in the United States was handed down on January 22, 1973. The court ruled 7-2 in Roe v. Wade. Henry Wade, the Dallas County district attorney, was the defendant in the class-action suit.

Since, there have been nearly 50 million legal abortions performed.

McCorvey was 22 years old and five months pregnant with her third child when she became the poster child for abortion rights.

According to the New York Times:

She was married at 16, divorced and left pregnant three times by different men. She had bouts of suicidal depression, she said.

Ms. McCorvey gave up her children at birth and was a cleaning woman, waitress and carnival worker. Bisexual but primarily lesbian, she sought refuge from poverty and dead-end jobs in alcohol and drugs.

She was 22 and pregnant when she joined the abortion rights struggle, claiming later that she had not really understood what it was all about. When she emerged from anonymity a decade later, strangers shrieked “baby killer” and spat at her. There were death threats. One night, shotgun blasts shattered the windows of her home.

Later in life, McCorvey switched sides and became pro-life, vowed to undo Roe v. Wade, and even testified before Congress. She was also anti-Barack Obama.