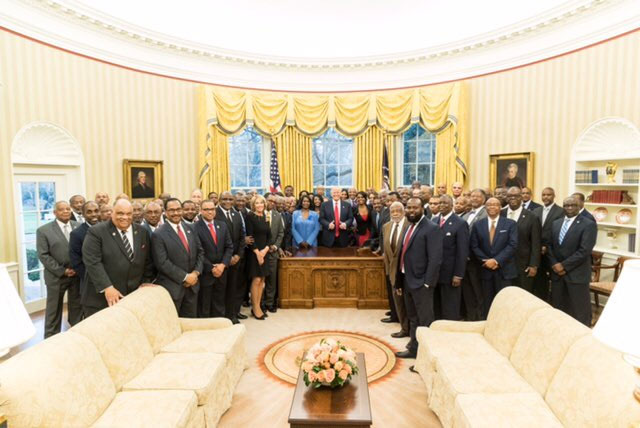 This week President Donald Trump met with 80 presidents of HBCUs in the Oval Office. The photo-op was a prelude to Trump’s promised action on helping HBCUs across the country. Thurgood Marshall College Fund President Johnny Taylor stated to media after the meeting, “The next step is the budget. You cannot have mission without money.”

The meeting and policy movement was widely seen as being promoted by Omarosa Manigault who is assistant to the president and director of communications for the Office of Public Liaison. Manigault is a graduate of Central State University and Howard University both of which are HBCUs.

On Tuesday, Feb.28, Trump signed an executive order titled “White House Initiative to Promote Excellence and Innovation at Historically Black Colleges and Universities.” The order moves the prior federal initiative from the Department of Education, led by Betsy DeVos, to the White House. The initiative was part of the Department of Education under the Obama administration, but all budgeting will still be under the purview of the agency. Trump stated of the move, “With this executive order, we will make HBCUs a priority in the White House — an absolute priority. A lot of people are going to be angry that they’re not a priority, but that’s OK.”

The order and Trump’s statements give a new perceived promise of presidential action. However, the wording of his order is copied almost to a word from President Obama’s executive order on HBCUs that was signed on Feb. 26, 2010. That order was titled “Promoting Excellence, Innovation, and Sustainability at Historically Black Colleges and Universities”.

Both Obama and Trump’s orders state:

“The Initiative shall work with executive departments, agencies, and offices, the private sector, educational associations, philanthropic organizations, and other partners to increase the capacity of HBCUs to provide the highest-quality education to a greater number of students, and to take advantage of these institutions’ capabilities in serving the Nation’s needs through five core tasks:”- President Obama, Feb. 26, 2010

“The Initiative shall work with agencies, private-sector employers, educational associations, philanthropic organizations, and other partners to increase the capacity of HBCUs to provide the highest-quality education to an increasing number of students.”- President Trump, Feb. 28, 2017.

The makeup of the President’s Board of Advisors on HBCUs will consist of 25 members appointed by the president. This is the exact same makeup of the board under President Obama and uses the same wording. Trump’s executive order offers no new percentages or funding amount for HBCUs and neither did Obama’s order in 2010.   At the same time, the presidents of the various HBCUs are trying to lobby Congress this week for a $25B increase in much-needed funding for infrastructure, student aid, and other issues.

It seems highly doubtful that a Republican-controlled Congress will increase funding for HBCUs, especially after President Trump announced plans for an increase in military spending and slashing the budgets of various federal agencies and social programs such as Obamacare. The question must be asked: What will change for HBCUs under President Trump?