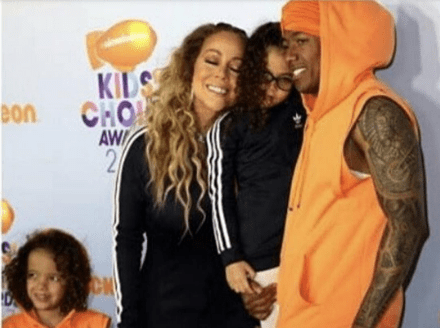 Nick Cannon and Mariah Carey reunite at the 2017 Kids Choice Awards with twins Roc and Roe.

On Saturday, March 11, the former couple put their co-parenting skills on display when they hit the orange carpet accompanied by their previous 5-year-old twins.

The family unit looked every bit of “stylin on em,” with Carey, 46, and daughter ‘Roe dressed in striped Adidas track jackets and matching hairdos. Meanwhile, Cannon opted for a quirky orange look, which he matched with son ‘Roc.

Earlier in the day, Carey shared her excitement over attending the event, by teasing fans with a photo of she and Roe’s adorable mother-daughter ensembles. “Excited to take #demkids to the Kids’ Choice Awards today! Trying on a matching ensemble with RoeRoe while @NickCannon is dressing Rocky ? #KidsChoiceAwards,” read the caption.

Excited to take #demkids to the Kids' Choice Awards today! Trying on a matching ensemble with RoeRoe while @NickCannon is dressing Rocky 😜 #KidsChoiceAwards

As you may already know, Cannon, 36, is the current chairman of TeenNick, where he’s served as a development and creative consultant since 2009.

He’s also starred in countless Nickelodeon series like “All That,” the ever so popular “Kenan & Kel,” the “All That” spinoff and “The Nick Cannon Show,” to name a few.

In 2014, Carey and Cannon called it quits. However, unlike many former A-list couples, the pair have appeared to keep the peace for the sake of their mini me’s. “I think that’ll be something that we’ll always embrace as a family and as our families expand,” Cannon, who welcomed son Golden in February, recently told People of he and Carey putting their kids first.

“It’s kinda the norm. It’s all rooted in love, it’s all rooted in positive energy,” the “America’s Got Talent” alum continued. “There’s no hard feelings and ill will. Ultimately, it’s about putting the kids first and making sure they have the best childhood they could possibly have.”

Happy to see this family has found a way to make it work.