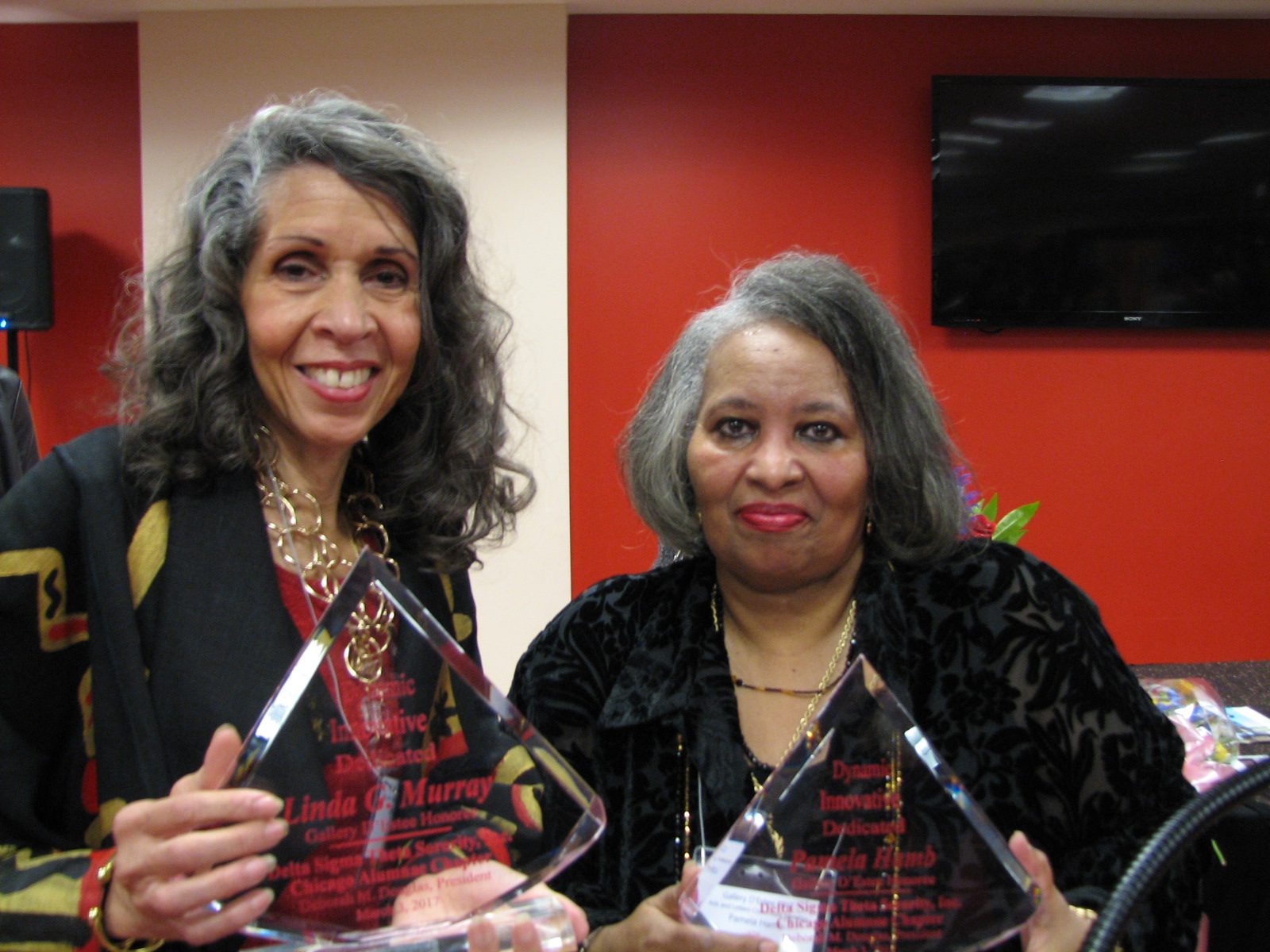 For the past 15 years, the Chicago Alumnae of Delta Sigma Theta has held an art fair and exposition on the first Friday and Saturday in March at their chapter. The event heralds the beginning of spring and gives community art patrons and neighbors a chance to view

and buy works of art from some of the Chicago arts community’s crème de la crème. This year was no different. Pamela Hamb and Linda G. Murray, two of the original organizers, were recognized for their tireless work and helped celebrate the sorority’s 15th anniversary providing Bronzeville and the community-at-large with art appreciation. This writer had the opportunity to speak with Pamela Hamb in some detail and this is what she had to say about the evening’s event.

Talk about the award you both received.

This award is given to people who have made significant contributions to promote African American art. Some of the past individuals, who received the award, were cultural icons such as Margaret Burroughs, Geraldine McCullough, Susan G. Woodson, Daniel Parker, Joan Crisler, Nicole Smith, Peggy Sutton, Diane Dinkins Carr and Patrick McCoy.

How did the idea of Gallery D’Estee originate?

The Arts and Letters committee of the Delta Sigma Theta Sorority Inc. sponsored an event to attend the Chicago Art Institute to hear David Driscoll lecture on how to conserve African American Art. This spurred a series of discussions with the Arts and Letters committee members on collecting African American art. One of the committee members, an artist herself, Felicia Preston, put us in touch with other artists to participate in our first Gallery D’Estee. These artists were Debra Hand, Andre’ Guichard, Dayo Laoye, Jason E. Jones, Joyce Owens, Tony Smith, Tony Wade and Samuel Akainyah.

Early on as organizers, what did you see as its purpose and what steps did you take to make that purpose a reality?

Gallery D’Estee’s purpose is to promote, educate and make African American art accessible and affordable to the community. The community center, located on King Drive, is transformed one weekend out of the year into Gallery D’Estee. This continues to insure the art is both affordable and accessible to the community. Also, it was clear from the beginning that this was not a venture to make money. So, we kept our fee structure low.

How has the annual exhibition changed over the years?

We have stopped hanging the art on the building’s walls. The art is being hung on portable walls. More artists now participate in the show from other locations besides the Midwest. The actual number of artists have increased from 7-9 in the early years to 20-24.

What has been some of the hallmarks you can cite over the last 15 years?

You were both recognized for your contributions to making Gallery D’Estee a reality. What emotions did you both feel?

We felt like proud parents who continue to see the Gallery grow and succeed. This has been a labor of love because the artists and committee members see us as a family working together. Gallery D’Estee is a movement, not a monument, to the African American art community which it continues to serve.