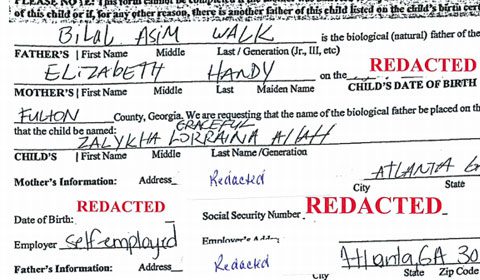 Naming your child is the greatest opportunity to express a legacy and blessing for many parents. The choice is difficult for some because they realize that a name will follow their child for the rest of their lives. But in Georgia, the parents of a 1 year-old-girl are being denied this freedom of expression.

Elizabeth Handy and Bilal Walk waited until their daughter was almost two to give her the name ZalyKha Graceful Lorraina Allah. Choosing the name “Allah” had nothing to do with religion. The parents simply like the noble sound of the Arabic word for God.

However, in the State of Georgia, there are specific rules related to naming children. The state of Georgia requires that last names must be either the same as the father’s, the mother’s or some combination of the two. So the state refused to issue a legal birth certificate for the toddler. Because ZalyKha does not have a legal birth certificate she can’t be enrolled in school, get a social security number or receive Medicaid. In desperation, the parents turned to the American Civil Liberties Union (ACLU) for legal assistance. The lawsuit petitions the Office of Vital Records to issue a birth certificate for ZalyKha, but according to the office it is bound by Georgia statute and cannot go against the law. The family notes that ZalyKha’s older brother, Masterful Mosirah Aly Allah, did not have an issue with the name on his birth certificate.

The lawyer for the state of Georgia, Sidney R. Barrett, wrote in a December 2016 letter “The requirement that the naming convention be bona fide was not intended to increase the burden of proof on the parents…But to distinguish between names chosen according to the cultural traditions of the parents’ nation of origin and names were chosen on the basis of whimsy, or worse.”

Many legal experts feel that the parents have good legal standing. The University of California at Davis law professor Carlton Larson is quoted as stating to the Washington Post, “It seems like a dumb name to me, but it’s probably well within their legal rights to choose. It’s a First Amendment issue — an expressive act of naming your child. And it’s a fundamental right under the 14th Amendment, due process.”

The State of Georgia is not commenting on the pending lawsuit as it makes its way through the court system.