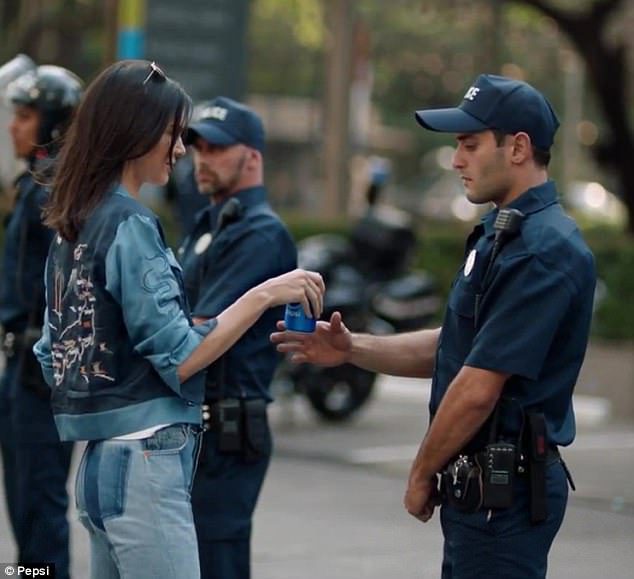 “If only daddy knew about the power of Pepsi,” tweeted Bernice A. King, daughter of late Civil Rights activist Dr. Martin Luther King Jr. She also shared photograph of her iconic dad who clashed with police on the front-line of a protest. The ad featured Kendall Jenner sporting a flaxen wig and in full makeup. She steps out into the crowd, pulls off her wing and wipes her face clean of her plum lipstick. She walks through the multicultural crowd of protestors and hands one of the officers a can of Pepsi. Twitter and Black Lives Matter protestors were in an uproar. Stars like Lena Dunham and Questlove clapped back. Dunham wrote, “Assuming everything that can be said about faux-test Pepsi ad has been said so I’m just gonna go with this: it didn’t make me want Pepsi.” 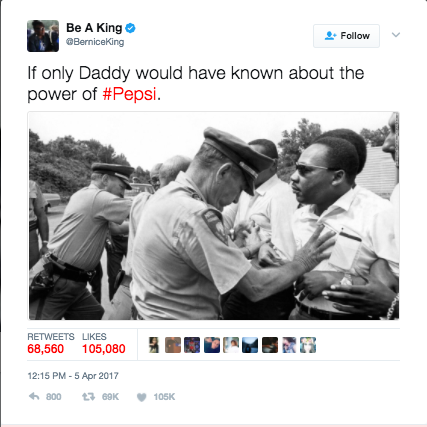 Questlove posted, “That Pepsi commercial was genius troll move of the year, 4 days from April Fools? we talkin/meming bout em too?” Pepsi heard the backlash loud and clear.

“Pepsi was trying to project a global a message of unity, peace and understanding. Clearly, we missed the mark, and we apologize.  We did not intend to make light of any serious issue. We are pulling the content and halting any further rollout. We also apologize for putting Kendall Jenner in this position.”

David Haigh, CEO of Brand Finance, commented, “Successful marketing campaigns have the power to add millions to the value of a brand. However, ill-conceived campaigns equally have the power to significantly erode hard-earned brand equity. Pepsi, which already had a difficult 2016 with its brand value dropping by 4% to $18.3 billion dollars, could face further losses in the value and strength of its brand as a result of this ad. Companies are right to push the boundaries and take risks when it comes to marketing products, but this proves that fallout from a single video can have a very damaging effect.”