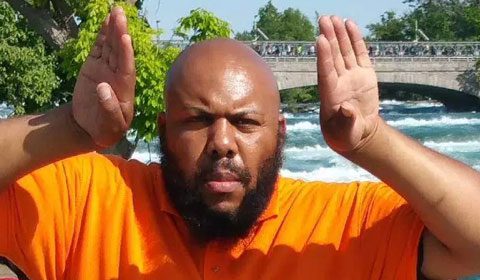 The high holiday of Easter has been interrupted in Cleveland by a man who can only be described as a maniac. Stevie Stephens, who goes by the name Stevie Steve on Facebook, recorded an encounter with an innocent elderly Black man on Sunday. He engages in casual talk and asks the senior, “Can you say Joy [sic] Lane?” the man seems confused and repeats the name and then Stephens says “She’s the reason this is about to happen to you.”

He then pulls a gun on the man and asks, “How old are you?” the senior raises his hands and says “I don’t know, no …” and is shot in the face. Stephens gets in his car and drives away, the Cleveland police department has confirmed the killing. The victim was identified as Robert Godwin Sr., 74, and his family is in shock over the cold-hearted homicide.

But Stephens was not finished with his Facebook postings and soon followed up with another chilling “Easter Day slaughter.” In his posts, he stated that he would not stop killing until his mother and another woman, possibly his ex-girlfriend, calls him. Facebook has deactivated his account under its terms of policy and taken down videos and posts. His last post on Facebook stated, ‘”This s— is real.”  In his video, he stated that he had killed people in abandoned homes and sparked a massive police search, but no other victims have been found.

Stephens’s postings show a seemingly educated Black man who “snapped.” In one video he is heard talking to a friend and he states that he was a good guy and that he disgraced his fraternity. In the video, he seems to identify himself as a member of Omega Psi Phi, one of the nation’s premier Black Greek fraternities. He also stated that he was going to shoot Greeks in the head until he gets caught. Stephens pins the blame on the shootings to a failed relationship and wrote in the caption of a photo with her, “three years I spent with this b—h … I wish we never met.”