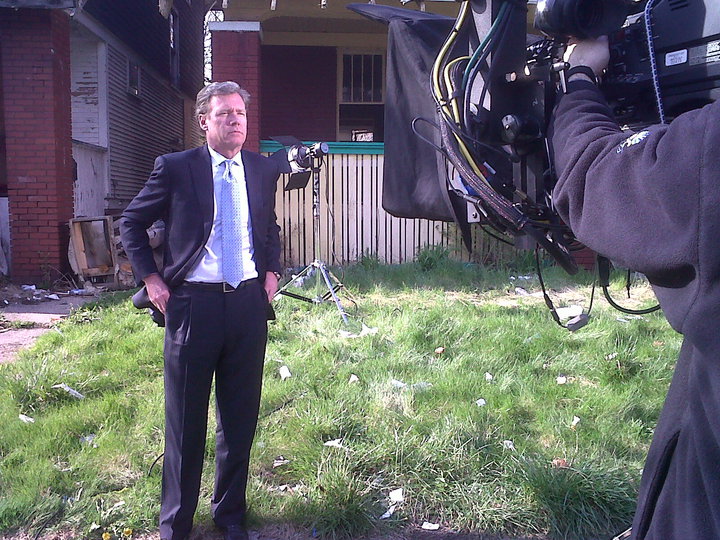 Chris Hansen, most famous for the “To Catch a Predator” TV show where he tricks pedophiles into meeting with undercover actors posing as children, has filmed a spin-off show in suburban Atlanta where two men were arrested.

Now titled “Hansen vs. Predator,” Hansen arranges a meeting for two adult men to meet with a minor in DeKalb County for sex before he busts into the room with a battery of TV cameras — all while a small cadre of police officers wait outside.

Both the Atlanta metro area and the state of Georgia have been cited as being among the worst perpetrators of child and women sex trafficking in the country.

This episode was shot Wednesday, April 17 in the Stonecrest region, a newly-minted city about 30 minutes east of downtown Atlanta, according to police records released Friday.

Jermaine Jackson Howard, 43, of Decatur, and Federeco Mendez, 45, of Conyers, are facing sex trafficking charges after showing up to a hotel, DeKalb police report.

Howard was arrested for attempting to pay $100 to an undercover officer posing as a 15-year-old. He was so anxious to get started that he was completely naked between the time the undercover female left the room and Hansen walked in, the police stated.

Perhaps knowing that he was doomed after seeing Hansen and the TV cameras come into the room, Howard became belligerent and aggressive,

“I don’t care if she was 15 or 61,” Howard reportedly yelled before he tried to say he did think he was meeting a minor but didn’t care.

Mendez, on the other hand, brought $80 hugged the undercover officer and squeezed her buttocks while trying to kiss her, the police report alleges.

Mendez told Hansen he was just coming to hang out. Initially, Mendez “attempted to act as though he knew little to no English,” the report said, but it quickly unraveled when police show his text messages he’d sent showing that he has a firm grip on the language.

Howard is out on $20,000 bond, jail records show. Mendez remains held on the same amount.

The show “To Catch a Predator” was wildly popular before it ended in 2007.


Posted in TV and tagged georgia, stonecrest, To Catch a predator