Here is the Prison B.R.E.A.K. (Building Relationships Empowerment and Knowledge) story of a mother’s love, loss and redemption.

I remember talking to an acquaintance some years ago. He had served 14 years in prison; he was a big shot before he went in. His children would’ve all been babies then. They hardly knew who he was outside of prison. By the time of his release, his family of mostly boys had grown into young men. They weren’t money-getters like him though. He confided his disappointment. I asked him how his relationship had been with them while he was away. His reply, “distant.”

There are so many stories like his. So many incarcerated fathers who either don’t have or can’t find [the] wisdom to impart to their children, for whatever reason. And as the years pass, the communication gap widens until the space between them becomes a seemingly unfillable void. And then there are other stories, the redemption songs. The ones that make you feel something when you hear them. That’s what Brandi Davis’s story does.

Her son was 3 years old when she left. Three. By the time it was all said and done she would serve seven and a half years of his life and hers, in confinement. And while she went from the county jail to state prison to a minimum-security federal facility, serving time would not be the hardest thing she’d have to endure.

It almost happened in the blink of an eye. In one moment it was all high-end merchandise and trips to here or there, in the next it was staring down drug charges on a federal indictment. She was given 120 months to pay a societal debt, 120 months away from loved ones, 120 months to decide and discover who she would be at the end of it.

What was the most challenging thing about being a mother in prison?
The separation. My son was so young. I missed a lot of his firsts — first day of school, first missing tooth, first time playing sports. Just not being there for those moments was difficult.

Did you visit, or talk to each other at all?
When I was in the fed’s I was in West Virginia so I got visits maybe two or three times a year at most. Then they got video visits toward the end of my sentence so I was able to see him like two or three times a week then. But we stayed in constant contact. He sent me all of his awards and things from school, I sent the things some of the ladies would make in here. I wanted him to know me, to be reminded all the time that I was his mother.

Did you have a strong support system?
I had a very strong support system. My mom and my dad kept my baby. But my dad ended up going to
prison three years after me so then it was just my mom. I have two sisters so they helped out a lot too. My family is real close. And my son is lucky because he was raised with his cousins as if they were siblings. So he has always had a sense of home and stability.

How did you keep your sanity while you were away?
I stayed busy. I got certified as a firefighter, I got my cosmetology license and I took a paralegal course. I took a lot of classes. In prison, it’s so easy to fall into depression especially if you don’t keep your mind occupied with something positive.

Did you have some idea of what prison would be like before you got there?
My father was incarcerated when I was younger, I had a lot of friends that were incarcerated so I was familiar with what prison was, but from an outside view. Once I was convicted, it didn’t matter what I thought prison was like before, ’cause I was still going. So I decided that whatever it turned out to be, I was going to have to deal with it. As it turns out, I was locked up with some good women who I had a rapport with and who I learned a lot from. Honestly, prison saved my life. I was on the wrong path. Had I not gone to prison I would probably be out here doing the same things I was doing before I went in. So it wasn’t the worst thing that happened to me. In fact, it was one of the best things. 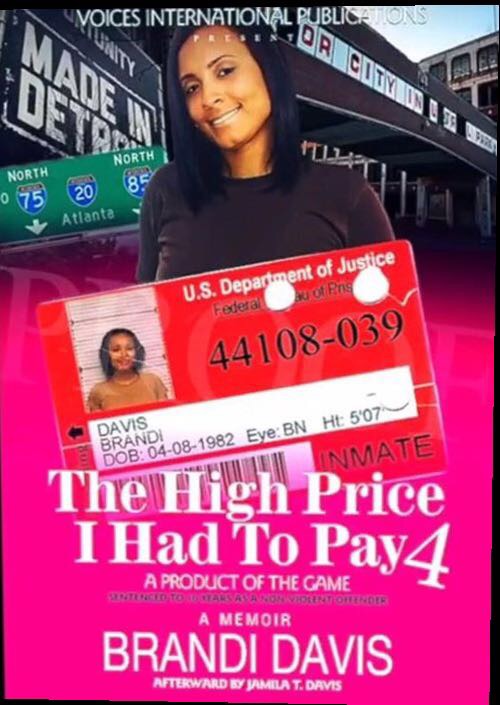 What’s the worst thing?
My dad. He went to prison on my case. And if I could have, I would have done that time for him. He had dementia, ended up coming home on a compassionate release and died a year before I got out. So I never got the chance to say I’m sorry or even talk to him about what happened. I feel like I’m to blame. So that’s guilt that I think I’m gonna carry around for a long time because I won’t have closure for that.

What advice would you give a young mother who has found herself incarcerated and struggling to deal with the separation?
Your children are going to love you no matter what. So you have to engage in constant communication. And don’t make assumptions. I was afraid my child would have animosity toward me because I left him. But that wasn’t the case. Let them know that you’re there for them, that you love them. The love they have for you is unconditional, you just have to nurture that. You’ve gotta be there as much as you can from where you’re at.

Are you a different Brandi now as a result of going to prison?
Yes. I found my independence while I was in there. I’m providing for myself now. I never had to do that before. And it feels good to be able to do things for my son and know I did it on my own. I want my son to see me through my actions. I’ve grown a lot. I’ve found out things about myself that I would not have known were it not for prison. I went into prison a little girl and I came home a grown woman. I grew up in prison, it raised me. And I’m truly happy now. This is the happiest I’ve been in my life.

Brandi is a native of Detroit currently living in Atlanta with her 11-year-old son. Her memoir, The High Price I Had to Pay 4: The Product of The Game, can be purchased on Amazon. And you can keep up with Brandi via Instagram @freeprettygirls.

Dave Bishop is the founder of the nonprofit organization, K.I.T.E. Inc., Konnecting the Incarcerated Through Excellence.The mission of the organization is to provide mentoring and support to children, younger than 18 years of age, who live in urban, under represented areas, and have at least one incarcerated parent. K.I.T.E. facilitates programs dedicated to providing financial assistance, emotional and crisis counseling, and educational and life skills training.
Connect with Dave:
www.savemykite.org [email protected] FB: KITEUSA IG: @savemykite Twitter: @davereign