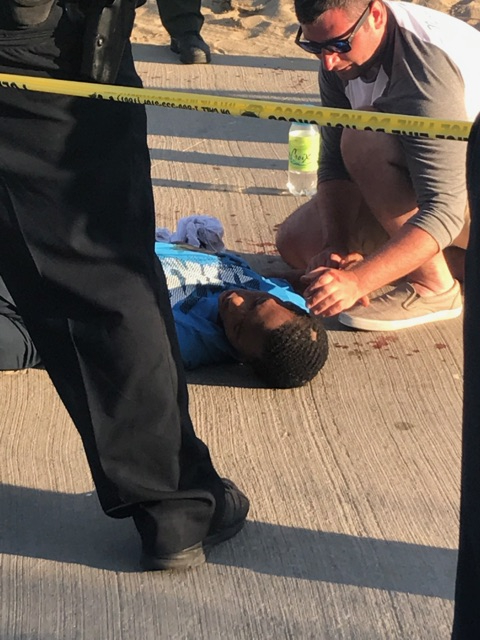 One of the victims shot at the 31st Street Beach in Chicago is laying on the ground waiting for paramedics. – Photo courtesy of Rhonda Griffin

We’ve had two exceptionally beautiful days in Chicago, but it didn’t deter the gun violence. Two young men were shot at the 31st Street Beach on the Southside of Chicago n Sunday, June 11. The shooter was reportedly a young woman.

According to the Chicago Tribune, the two 16-year-old male victims were critically wounded.

One boy was shot in his neck and the second teen was shot in both legs at around 6:40 p.m. on the 3100 block of South Lake Shore Drive, officials said.

Rolling out spoke with Rhonda Griffin who was on the scene with friends and family when the  shooting occurred.

“I was sitting on the sand listening to music with friends and family taking pictures when it happened. It’s so sad; thousands of people gathered with their children, having a great time [and] enjoying this beautiful Chicago weather on this relaxing Sunday. Then, all of a sudden, hundreds of parents are running in fear that their child is the next victim of gun violence in Chicago. It’s so heartbreaking that people are really this heartless. The people around me instantly ran towards the water. And we threw our kids on the ground. It’s just sad and the summer hasn’t even begun.” she said

These acts of senseless violence continue to plague our community. This epidemic directly affects the lives of countless families in the city. 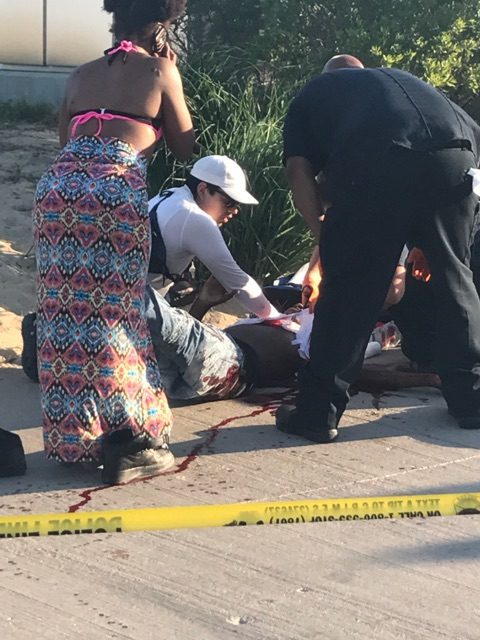 We also spoke with Dean Cantave, who was at the beach with his son. We asked him how this situation makes him feel.

“I feel disappointed because so much money was invested in the renovation and building of 31st over the years by the city to make it a place that is truly top-notch and enjoyable during the summer. I feel bad, upset, and sad that someone would do that where there are so many children running around,” he said.

Police and firefighters arrived on the scene to attend to the injured. The beach was evacuated and closed. The shooting victims were taken to Northwestern Memorial Hospital, according to Chicago police.