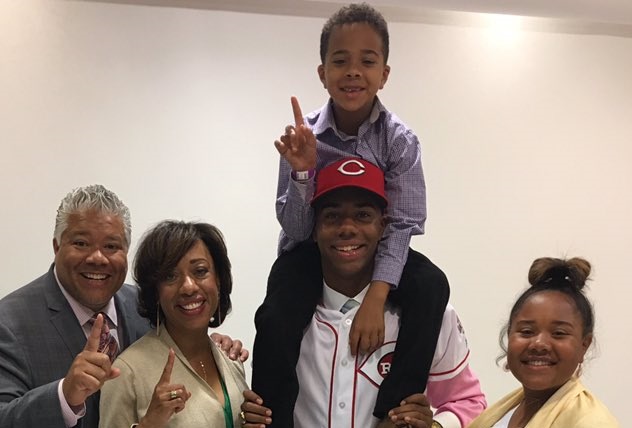 The Cincinnati Reds selected left-handed pitcher Hunter Greene with the second pick of the MLB Draft on June 12. Here are five reasons you should know who he is.

He’s been recognized for his service in the community
The Los Angeles native has been honored four times by local political officials for his efforts in the community. He once read about a shortage of socks for the homeless one winter and he led a drive that brought in 2,300 pairs. He made his first speech promoting youth baseball at age eight and last year he was on a panel with John Smoltz talking about how young pitchers can limit arm injuries.

In his free time, the Renaissance man also plays the violin, speaks a little Korean and paints.

He was also a highly ranked shortstop
His coach at Notre Dame High School said that Greene was the best infielder he’s ever coached. Being drafted as a pitcher, the 6-foot-4 athlete also could’ve gone later as a shortstop in the first round.

He aims to inspire young Black athletes to play baseball
In a tweet thanking Sports Illustrated for featuring him, Greene said he hopes his cover “inspires.” Since stepping into the spotlight, he’s been more outspoken about wanting to diversify the sport of baseball.

“I don’t think being on the cover of Sports Illustrated, being picked first overall — it’s not good enough for me,” Greene said in an interview with Jemele Hill and Michael Smith on “SportsCenter.” “But it’s other things like really reaching out and physically being there in front of kids to show them that someone who’s African American can really overcome a lot of things and work hard and persevere to be on top of the world.”