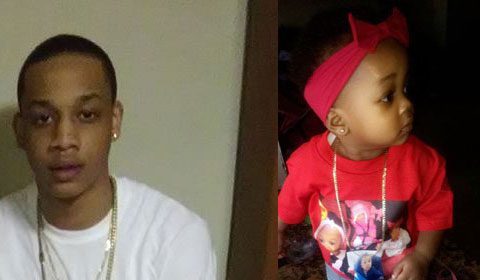 According to the New York Daily News, this past Father’s Day, Taylor let his anger come out again and now stands accused of beating his 16-month-old daughter into a coma. The girl’s mother, Tammy Lewis, dropped little Nylaha off with her father so he could spend quality time with his daughter. Hours later, she received a Facebook message from Taylor saying something was wrong with Nylaha and she needed to come get the child. When Lewis arrived to pick up her daughter, she found her lying face up on the couch and struggling to breathe. Lewis grabbed her daughter and ran out of the apartment and Taylor pursued her into the lobby. That’s when he punched her and knocked her unconscious, leaving both baby and mother on the floor. He then grabbed his daughter and gave her to a friend and went back to his apartment. The friend called 911 and when help arrived, the toddler was rushed to the hospital.

Nylaha’s situation was grim; according to police, she suffered bleeding on the brain, two skull fractures and bruises covering her legs, face and other parts of her body — all at the hands of her father. When police questioned Taylor about the child’s injuries, he told them Nylaha had fallen off the bed.  Police arrested Taylor and charged him with felony assault for beating both Lewis and her child.

Little Nylaha is in critical condition and is not expected to survive her injuries at Maimonides Hospital in Brooklyn, New York. According to police records, Taylor was charged with sexual misconduct in 2015 because he was in a relationship with Lewis, who was only 14 at the time. A year later, he was arrested again for harassing her.