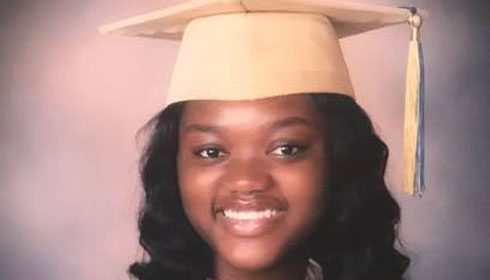 In just a few weeks, Bianca  Roberson, 18, of West Chester, Pennsylvania, would be on her way to Jacksonville University. She had just graduated from Rustin High School and according to family and friends, she was excited.

Yesterday, she was returning from a shopping trip when tragedy struck in the form of road rage. According to police, Roberson was trying to merge lanes at the same time with a White male in a red pickup truck. Road cameras caught a blurry image of the driver in the red truck pulling close to Bianca’s vehicle at which point he shot her in the head. Bianca’s  car crashes into a roadside ditch as the driver in the truck speeds away.

The driver is being described as a  White male, medium build, 30 to 40 years old with blonde or light-colored brown hair. His vehicle is described as a small, red Chevrolet pickup truck with faded paint. Police in three states are now looking for the vehicle

Roberson’s family members of Bianca are devastated over their loss. NBC-News 10, talked with family members who expressed their sorrow and talked about the teen having big dreams and showed her room where she had been decorating a poster for her dormitory.

Hogan went on to say, “This is now a murder case. A young woman has died senselessly. … Every cop in three states is looking for this red pickup truck and looking for this defendant. At this point, we’re asking anybody who saw anything on Route 100 going into Route 202 to call the West Goshen Police Department right now, tonight. Give us every bit of information you can.”