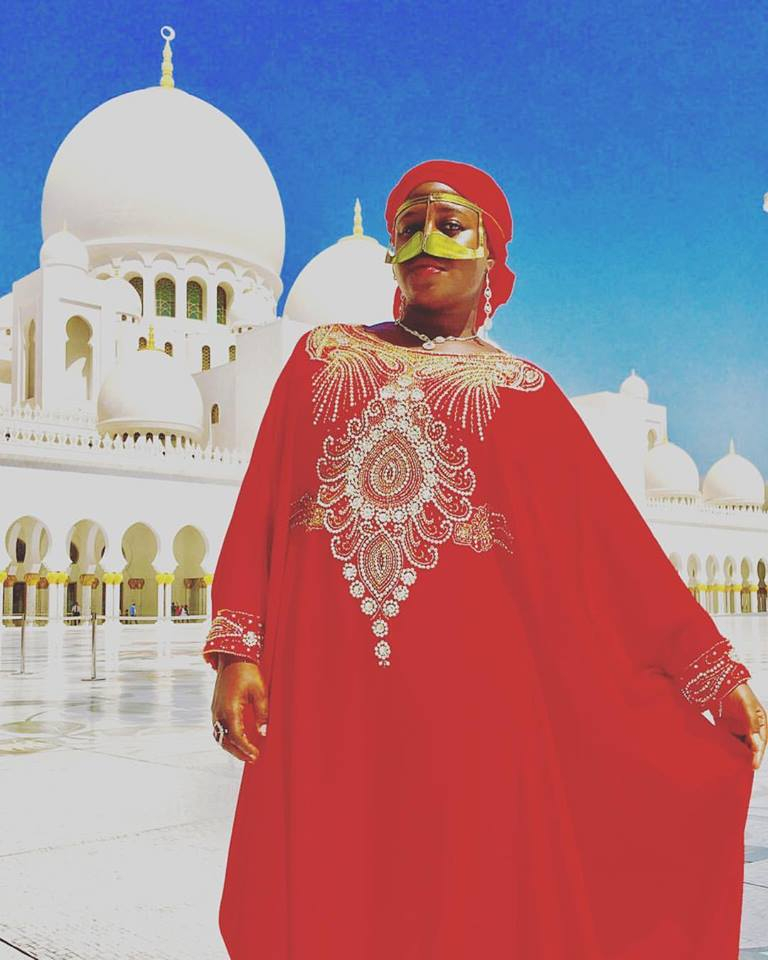 During a recent trip to Dubai, my husband, writer East Texas Bama, and I decided to take a breather from the bustling and most grandiose Emirates city. Like most visitors, we sought the suburban (only slightly less grandiose) desert shores of capital city Abu Dhabi.

Like its sister city, Abu Dhabi boasts ambitious skyscrapers, meticulously cooled mega malls (because you have to cool off somewhere), and adventurous amusement-driven tourist attractions. The Persian Gulf beauty, whose name translates to “father of the gazelle” in Arabic, is less populous, a bit slower, and its far-stretching turquoise beaches provide the perfect backdrop for couples seeking respite for canoodling.

Taking tips from fellow experienced travelers, the hubster and I opted against staying in Abu Dhabi, and instead arranged a day trip with a private driver. The concierge at our Jumeriah Beach hotel suggested several tour groups and limousine services with price tags ranging from $300-$800 for 6-12 hours of guided experiences in Abu Dhabi. These services included air-conditioned rides from and to our hotel (important), and stops at noted major attractions in Abu Dhabi. While the offerings were standard and matched those I’d found online prior to the trip, as experienced travelers, we often seek something a little more tailored to our needs. East Texas Bama hates tourist traps — he prefers hard-to-find gems — and I’m mostly interested in the big must-sees, relaxation, food, and spirits. Also, I was Dubai-beaten and not looking forward to hours and hours in another city. I wanted to get in, out, and back to Dubai in time for dinner.

We decided to arrange our own transportation. Having enjoyed a day in the Al Awir Desert organized by Dream Nights Tours the day before, we parlayed with our driver Bilal from the trip. (PLEASE NOTE: When you are traveling, your driver is the most important person. When you find a good one, get his/her contact information and tell him/her what you want to see. They know the place and can show you around—often at a cheaper rate. Still, be cautious and alert at all times while abroad). Bilal connected us with another driver, Shoaib, at a much less expensive rate than quoted by the hotel. We confirmed door-to-door service, air conditioning, and historical information from our guide along the way. To our delight, we selected the arrival and departure times of our private ride for our preferred locations.

As promised, our delightful and knowledgeable Dream Nights Tours driver Shoaib arrived at our hotel at 8:00 am (he was actually early). The car was cool (See a theme? This is important in the desert) and we were whisked off to a fun-filled day to see the sites in Abu Dhabi. He asked for our list of must-sees, added a few of his own and told us to sit back and relax for the 90-minute ride from Dubai to Abu Dhabi. I, of course, took a nap. But when I awoke, we were just outside Abu Dhabi and ready to take it all in.

Grand Mosque
The first and most important stop was Sheikh Zayed Grand Mosque. You really can’t visit Abu Dhabi without walking the hallowed halls of this religious monument designed by Yousef Abdelky. The largest mosque in the UAE (and that’s saying a lot), the 20-year-old mosque covers 30 acres and is the resting place of Sheikh Zayed bin Sultan Al Nahyan. Each Friday, the mosque welcomes as many as 41K Muslims for Eid prayers.

With its classic Arab minarets and bodacious white domes, the mosque is a top destination for travelers seeking a serious photo op…err, cultural experience. We came ready, dressed in traditional attire — I in a mall-found red Abaya, and East Texas Bama in a thawb and keffiyeh (worn on the head for protection from the sun). 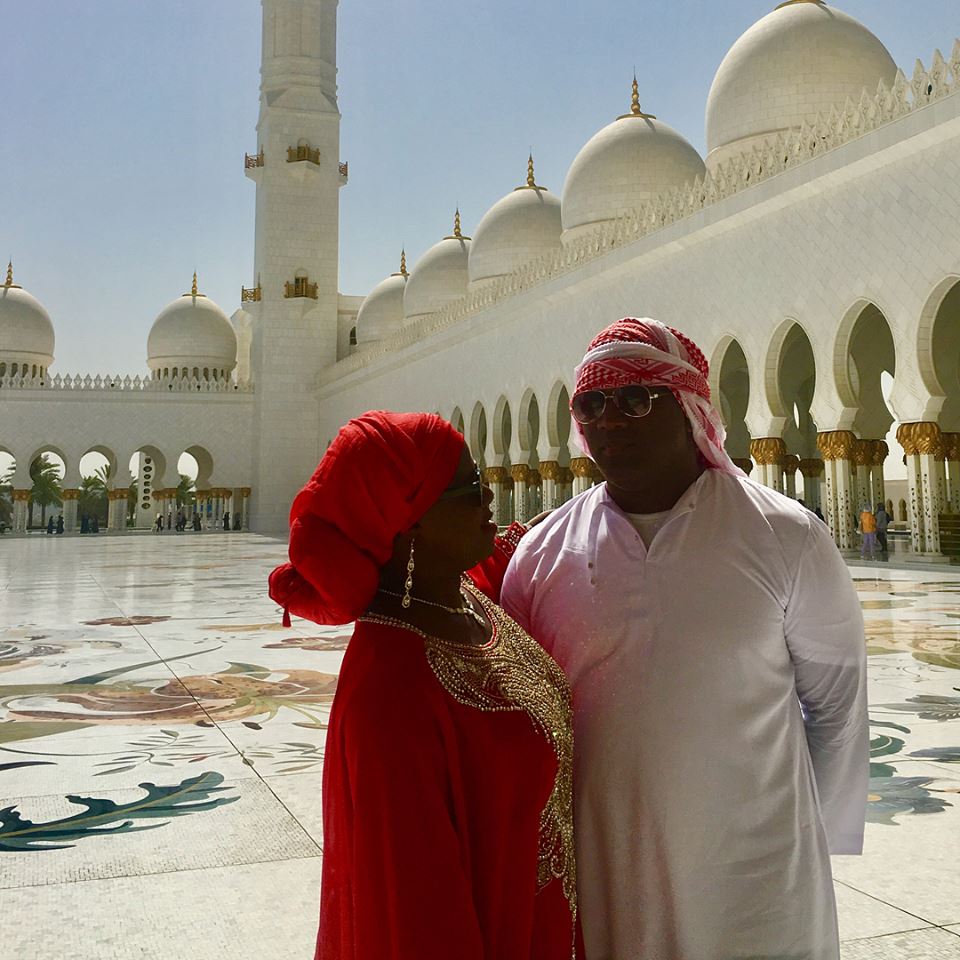 We quite enjoyed experiencing the mosque. It’s a no fuss stop where tourists are required to kick off their shoes, take a breath, and marvel at man’s creation in observance of his God. Inside the mosque, a sprawling, intricately decorated carpet kisses dramatic chandeliers and decorations. Some corners host bookshelves filled with Korans. I was warned not to touch the holy books.

Tips: This is a place of worship. If you visit, behave like you’re in a church. No silly selfies or loud talking. While you’re visiting, people may be praying or meditating. Be respectful. Also, women, prepare to cover your hair and extremities. You’re a visitor. Experience the culture.

If Grand Mosque presents the grand vision of Abu Dhabi’s oil-rich present, Heritage Village shares its humble pre-oil past. While few tourists stop here, our driver wanted us to have a short peek at the living exhibition presenting long-gone life and culture in Abu Dhabi. The reconstructed village pulls visitors back in time and introduces them to desert life before skyscrapers and hotel chains. Villagers craft pottery, work metal, weave, and spin to make impressive fabrics. There are spices for sale and other exhibits. The exhibit is walled in, so you really feel like you’ve been transported to another time. This is great for children and history buffs. 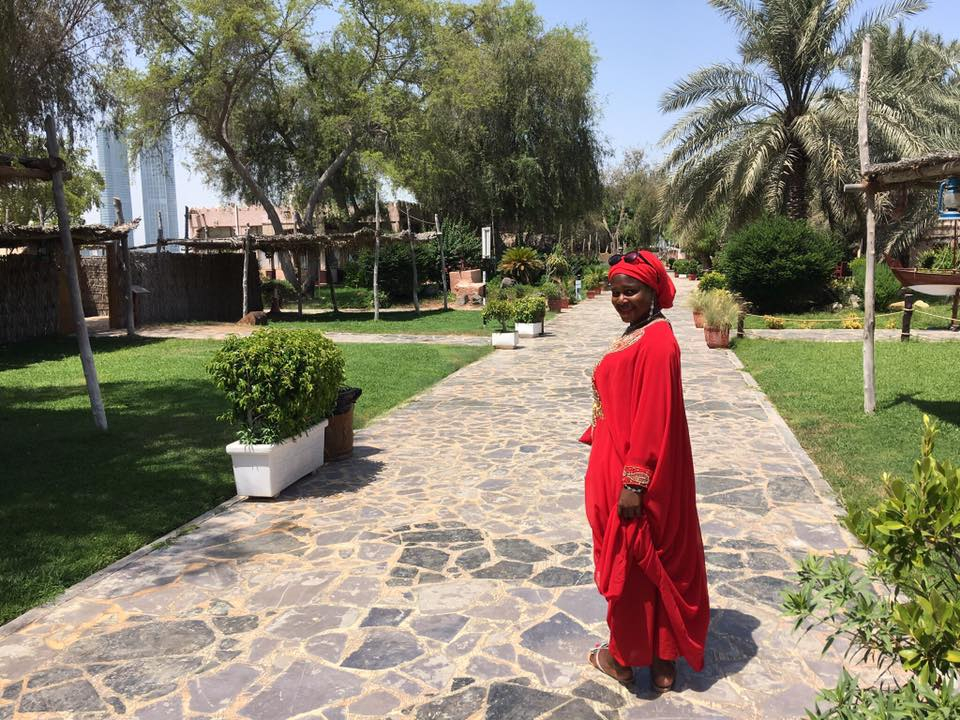 Walking through the past. Heritage Village. Photo Credit: Stallworth Infinity

Burgeoning City Scape—The Corniche
As we drove through the city, our guide pointed to the growing hotel industry in Abu Dhabi. Most chains are present and many boutique hotels dot the shoreline. There are also “live, work, play” structures similar to those in the States being built. Still, the skyline isn’t as overwhelming or braggadocious as Dubai. I hope it stays that way. The sea and skyline are best viewed from The Corniche, a stretch of road reclaimed from the sea that features walking and biking paths used to take in both natural and man-made wonders of the city.

Beaches For Days
If Abu Dhabi isn’t already considered a beach town, it should be. That’ll certainly save it from becoming another Dubai. Abu Dhabi has several public and private beaches. As it’s the Persian Gulf, the water is often quite warm and calm –- I kept calling it a big bathtub (I’ve actually experienced ocean water this warm on the Gulf Coast in America). We visited the rather busy Corniche Beach and the man-made exclusive beach at Emirates Palace.

Emirates Palace
Like having tea with the Queen of England, most travel sites say you must check in at Emirates Palace for a spot of top-tier tea. One must relax in the palace’s opulence and enjoy its splendor, all fit for a queen. The Kempinski-operated hotel built in 2005, isn’t the biggest and best in the UAE, which has too many luxurious hotels. Still, there’s something romantic and more confident about the place that makes it feel like a real palace — and you a royal resident. 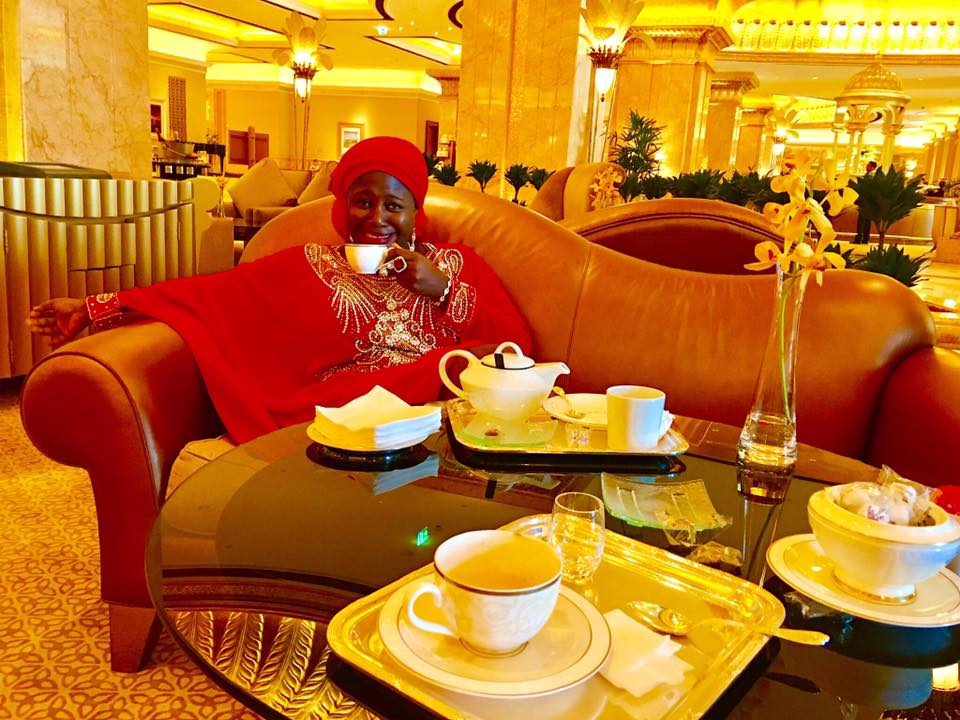 Tired after sightseeing for much of the afternoon, we came here to relax, take in the beach, see a few expensive things and burn a little money on gold-speckled desserts. Like a king and queen in our royal attire, we entered our palace (in our heads) and were welcomed into a heavily (and handsomely) staffed residence that smelled of thick jasmine and lavender. The ceiling was as high as the sky and everything seemed too expensive to touch. Our staff escorted us to the dining area at the back of the main floor where cafes and restaurants host visitors and those staying at the lavish hotel.

The king was offered the gold-flecked cappuccino and the queen enjoyed rose tea. We sat and chatted so long, we forgot where we were – and who we are. Soon, we were laughing and easing back in our thrones at our new palace.

After walking around the grounds, we summoned our driver and headed back to Dubai. 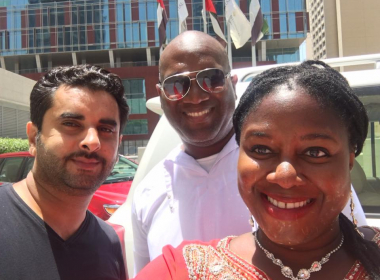 Abu Dhabi didn’t disappoint. Really, I wished we could’ve stayed longer, but I had an appointment with a pool, a masseuse, and an Indian chef in Dubai, and nothing was coming between us — nothing. Those studying Abu Dhabi will note that we skipped a few major attractions, most notably Ferrari World and Yas Waterworld. Those, we’re sure, are stones better left unturned in the desert. We collected the best ones and shall savor the memories.

See photos from our excursion below. Photo Credit: Stallworth Infinity. 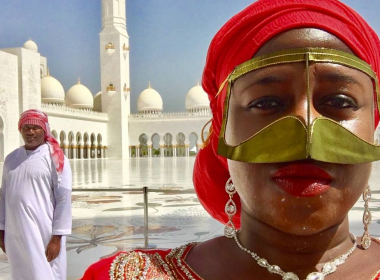 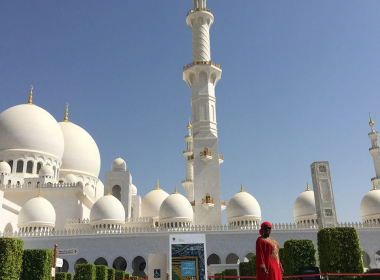 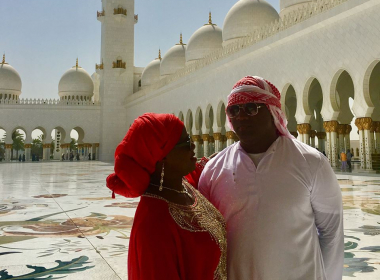 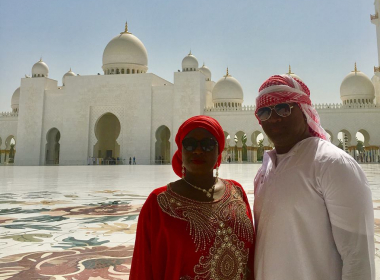 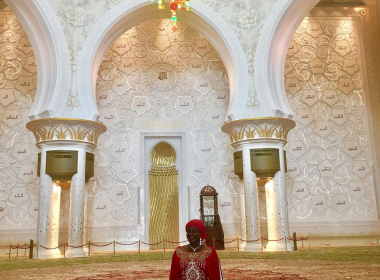 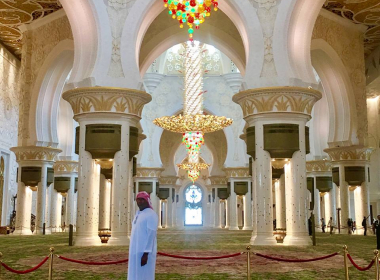 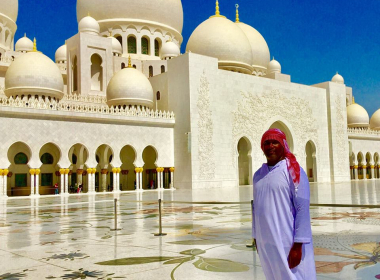 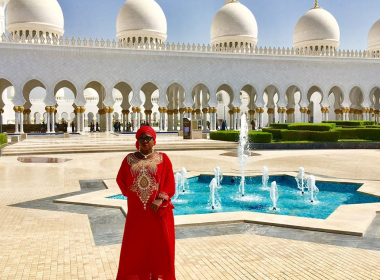 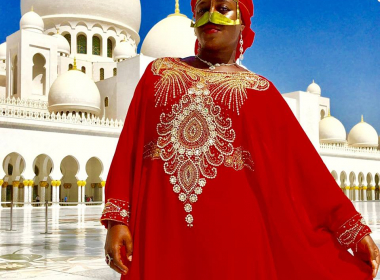 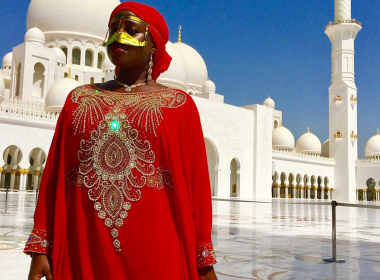 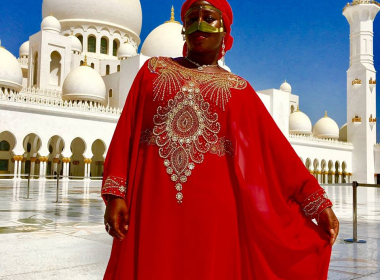 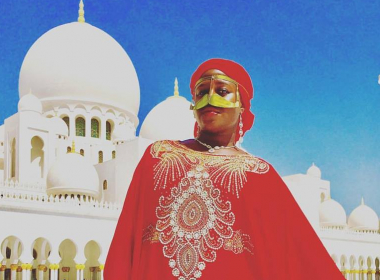 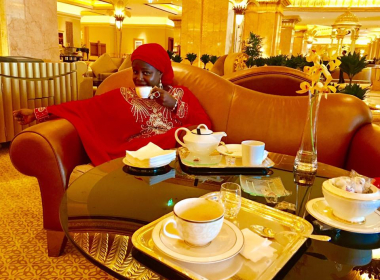 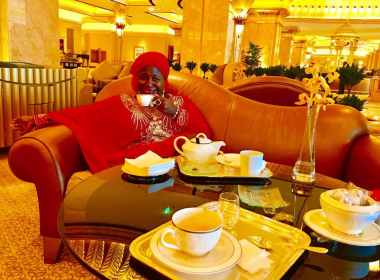 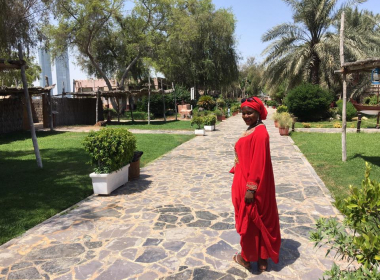 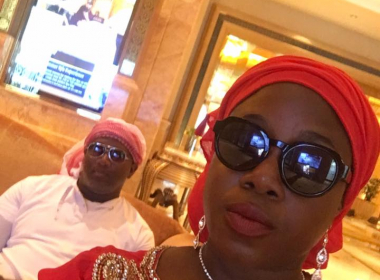 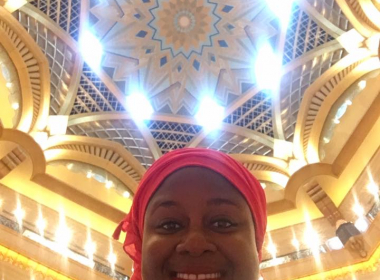 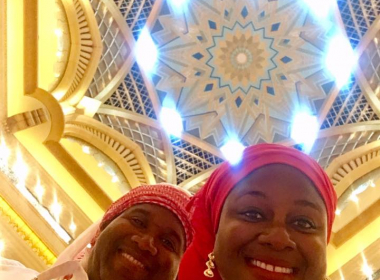 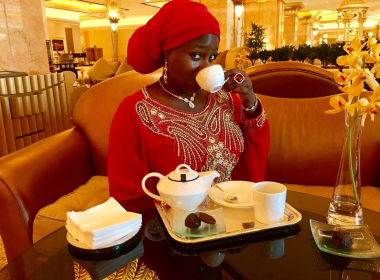 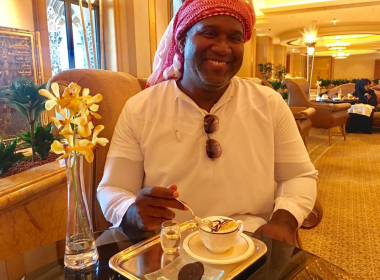 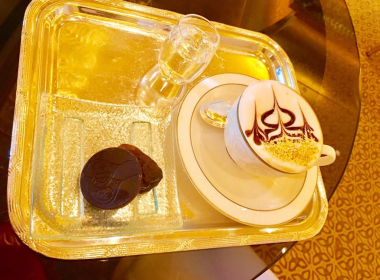