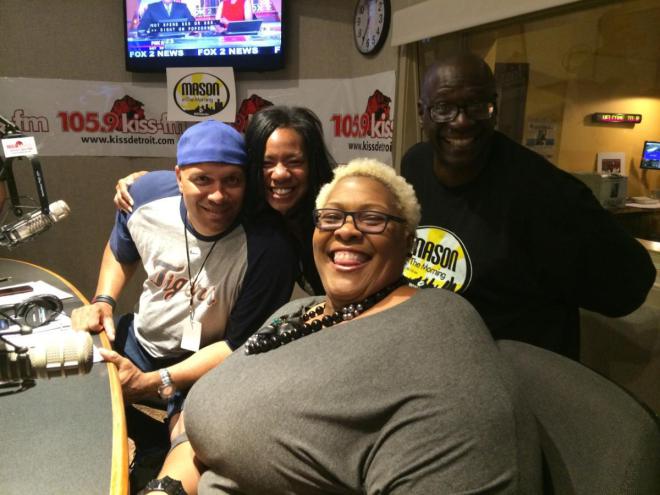 Music, news, in-depth conversations, and laughs are what you hear while listening to the “Mason and CoCo In The Morning” show on Kiss 105.9 in Detroit. Led by the legendary Mason and comedienne Coco, they engage and educate listeners from 6 a.m.-10 a.m. weekdays. Rounding out their team are Tune Up Man and Angie Starr. With almost 30 years on-air, Tune Up Man is dedicated to his city. Although he’s explored other ventures, his heart remains in radio. He keeps people laughing with his brash sense of humor. Complementing Tune Up’s playful nature is the warmhearted Angie Starr. Her name is appropriate as her infectious energy is undeniable.

Check out rolling out’s exclusive interview with these dynamic personalities.

Tell us why are you on the radio in Detroit, what’s unique about Detroit?
Tune Up Man: I’m from Detroit, born and raised. I am Detroit. I believe in Detroit despite the things we’ve been through. I was a kid in the ’67 riots, I’ve seen the downfall and the terrible times of Detroit to now — the resurgence of new Detroit and it’s a blessing to be a part of it with Mason and Coco. I’ve been on quite a few different stations in the Detroit market. I wouldn’t want to work anywhere else. I had opportunities to work in California and down south, but I decided I wanted to stay home. I’m from Detroit, and people love people from Detroit.

What do you think of the “new” Detroit?
Tune Up Man: It is pretty much new. As you see, the color of Detroit is changing. It’s coming back to where it used to be. You’ve got new people and new businesses coming in. Before, people were running to the suburbs and even leaving the state of Michigan. Now people are coming back to Detroit. All the sports teams are back. We’re one of the last big metropolitan cities to have all teams down in one area and I think it’s a great thing. I’m excited about it.

How did you get into radio? How have you maintained your longevity?
Tune Up Man: I’ve been doing radio since high school. It’s always been in my blood. I DJ’d my first party at 12 years-old. I knew in my soul that I always wanted to do this. I did it in high school and college. It’s about staying relevant and changing with the times. Getting more involved with social media, anything new that comes across I embrace it.

Who have been some of your favorite interviewees?
Tune Up Man: I always look back to an interview when Fresh Prince first came out, Will Smith, him and Jazzy Jeff came by. Even when he did hit fame, when he came back he was the same person. That’s what I like about people, no matter how their celebrityism has increased they’re still down to earth people. Also Ludacris is one of the best guys — a former radio DJ who had the chance to start off in the DJ game and went on to wonderful things in the rap game.  357 [Oaktown], B Angie B, The Fat Boys, Whodini; I could go on and on. We’ve developed some great friendships.

Angie, you’ve been rocking with Mason for a long time. How did you get your start in radio?
Angie Starr: I wanted to be a singer, so I felt like being on the radio will get your songs played. So I went to a radio station and I interviewed with the sales manager ’cause I found out that’s a way you can get into radio. I started out with sales in Richmond, Virginia. I was the promotion director for Power 99 in Philadelphia, then I came back to Detroit and worked at WJLB, that’s how I met Mason. I started singing for ’bout 10 years, I did a tribute to Tina Turner for Universal Studios. I came back home to visit, and Mason was telling me that he was starting his own radio morning show. Coming from a radio background, I knew how important that was to the community. I felt like that would be a way we could expose new artists and local advertisers. I love the people aspect of this — this community. We really care about Detroit. I was adopted, my mama gave me up at birth. I found my adoptive parents here, so that’s why I came back home to try to help Detroit. Through radio, I think we can do that.

You’re highly involved in the community, what major organizations and causes are you guys involved in?
Angie Starr: St. Judes is big for us. We also help a little boy named baby Amir who has a rare bone disease. He’s in hospice now, we do fundraisers for him. Treehouse is [another] organization that I’m working with right now. If people come to me with things that are non-profit, they’re helping the community, I will take ’em on. We don’t turn anybody away and that’s why I like working with Mason because he’s from that same mindset. I believe radio stopped serving the community the way it should. If you didn’t have big dollars, you couldn’t really be on radio. But now, we’re changing it. We figure out ways to work with local businesses that works with their budget.

In terms of show content, what does preparation look like?
Angie Starr: You constantly have to be on Facebook. I’m always looking for stories. We have different news services that we use and we find the stories that we want to talk about and then we find the sound for them. We try to find things that are trending, things that people are talking about.

What’s the best part of your job?
Angie Starr: Being able to listen to music all the time. Like I said, it started because I sing. I love the fact that I can always put my headphones on and listen to music. And the other side of it is, I love the stage. I love people, it’s no crowd that I’m afraid of, I love that part of my job.

Tune Up: This ain’t work, it’s like you’re coming to play. It’s fun, you’re doing what you love doing. I haven’t really worked a day doing this—ever. Being able to live your dream and come to work with family. We feed off the energy of our people.You’re on the phone, you got music, you got people to kick it with. That’s heaven to me.

Angie Starr: We’re like a misfit family that fits very well together. I love Tune Up and Mason like my brothers. Coco is big my sister.