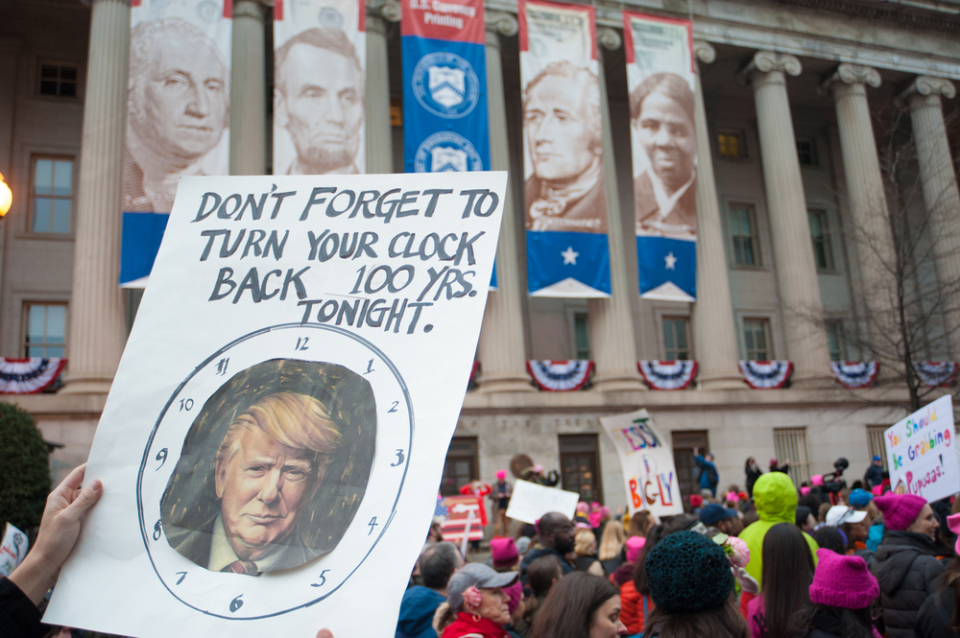 WASHINGTON – A protester holds a sign at the Women’s March on Washington rally in support of women’s rights in Washington DC on Jan. 21, 2017,  the day after President Trump’s inauguration (Photo credit: Rena Schild)

President Donald Trump’s White House is working to redirect resources of the Department of Justice’s civil rights division to investigate and sue universities over affirmative action admissions policies deemed to discriminate against White applicants, according to the New York Times.

Kristen Clarke, president and executive director of the Lawyers’ Committee for Civil Rights Under Law, released the following statement in response to the release of new information signaling efforts to redirect resources of the Justice Department’s Civil Rights Division toward investigating and suing universities that maintain race-conscious admissions policies.

“We wholly condemn this latest attempt by the Justice Department to attack the use of race-conscious admissions policies in the higher education context. By assembling a team of attorneys in the front office of the Civil Rights Division to focus on so-called ‘intentional race-based discrimination’, this Justice Department is laying the groundwork to attack policies that help promote racial diversity at colleges and universities. Throughout his career, Attorney General Jeff Sessions has pushed efforts to end affirmative action programs and he has a clear record of hostility to racial diversity. We will not stand by idly as this administration continues to hijack and obstruct this Division’s core civil rights mission. Americans deserve a Justice Department that will focus on preserving racial diversity and addressing racial discrimination faced by African Americans, Latinos and other minority communities.”

The Lawyers’ Committee for Civil Rights Under Law has been focused on this administration’s efforts to obstruct civil rights enforcement and has condemned repeated actions taken to reverse or delay action in active matters handled by the civil rights division.