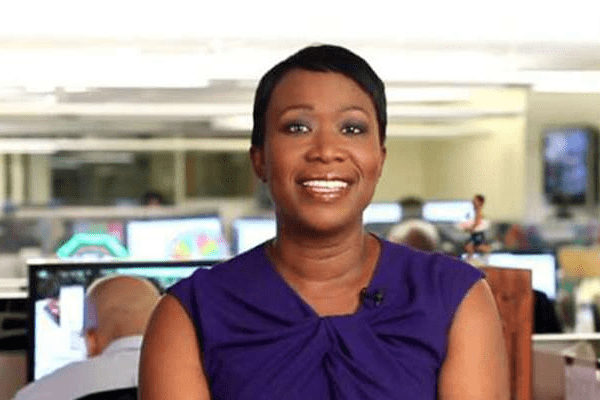 Joy-Ann Reid‘s talk show “AM Joy” on MSNBC continues to pull in big numbers, stomping the competition in the process.

Overall, “AM Joy” enjoyed 53 percent growth for the Saturday edition and 72 percent for total viewers for the Sunday edition.

Joy-Ann M. Lomena-Reid, also known as Joy Reid, is an American cable television host and a national correspondent at MSNBC. She is also a regular political commentator on both television and in publications such as The Daily Beast.

The outspoken liberal Democrat wrote a book on the recent history of the Democratic Party in 2016 called Fracture: Barack Obama, the Clintons, and the Racial Divide.

Reid was born Joy-Ann Lomena in the Brooklyn borough of New York City on Dec. 8, 1968. Her father is from the Congo and her mother from British Guyana. She attended Harvard University where she studied documentary filmmaking.

Reid began her journalism career in 1997, leaving New York and her job at a business consulting firm to begin working in South Florida for a WSVN a Channel 7 morning show.

From February 2014 to February 2015, Reid hosted her own afternoon cable news show, “The Reid Report.” The show was canceled on February 19, 2015, and Reid was shifted to a new role as an MSNBC national correspondent.

Reid currently hosts “AM Joy,” a political weekend-morning talk show from 10 a.m. to noon on MSNBC, as well as appearing on other MSNBC shows.