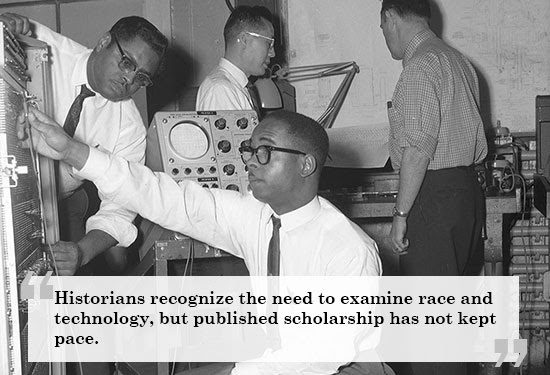 Photo credit: This photograph, published in the IEEE Computer Society’s Annals of the History of Computing in its January-March 2017 issue, features the Wayne County Commission, 1962, and comes from Burroughs Corporation Records and Photograph Collection, 1946-1963, held at Charles Babbage Institute, University of Minnesota.

IEEE Annals of the History of Computing (Annals), published by the IEEE Computer Society (IEEE-CS), takes an in-depth look at how Black scientists suffer “almost complete invisibility in most of the history of computing literature.”

R. Arvid Nelsen’s “Race and Computing: The Problem of Sources, the Potential of Prosopography, and the Lesson of Ebony Magazine,” is level setting history and correcting the “Whiteness” of historical records. Nelsen’s findings come in the wake of the film, Hidden Figures.

How is he doing it? Nelsen is using nontraditional sources including oral histories, company rosters, school yearbooks, biographical dictionaries, and publications such as Ebony magazine to reconstruct the history of Blacks and other minorities in tech. Conventional sources used by historians are largely a void on the subject. Nelsen is a librarian, researcher, and member of the IEEE-CS, and he’s white.

During an interview with IEEE-CS, when asked what he means about the “whiteness” of historical records, Nelsen offers:

“When I wrote about the ‘whiteness’ of historical records, in large part, I was responding to the work of Carolyn de la Peña and her 2010 article in Technology and Culture, ‘The History of Technology, the Resistance of Archives, and the Whiteness of Race.’ She describes the difficulty historians have in locating people of color in archival collections that document technology. For me, her work emphasizes, in part, the role played by archives in shaping history. The materials that archivists decide to collect, preserve, and make accessible for research play a very large role in shaping what can be known and documented about the past. Historians searching for evidence of persons of color in archival collections devoted to technology often find little or no explicit documentation. It must be remembered, however, that this does not mean that persons of color did not exist or contribute to technological developments, simply that the institutions that collected materials either consciously or unconsciously preserved only or substantially the records of white people, most often white men.”

During his research, Nelsen discovered Ebony magazine published 57 profiles of African Americans in electronics and computing for nearly the second half of the 20th Century. He says, “I was actually looking for advertisements about programs geared toward entry-level training for underserved communities. I wasn’t looking for information about accomplished professionals with advanced degrees. I think that I was like many people who have perhaps unconsciously accepted the prevailing narrative that computing was mostly White and male. I was terribly excited that source materials were out there but astonished that they were not where I or historians apparently expected to find them.

“I was also perplexed that so many people could be readily identified in published materials and yet go undiscovered or unnoticed by scholars — that so much had been written about the need to address race in computing and the difficulties in locating materials. Yet, here it was, just where apparently no one had looked.

“I do have to say that coupled with excitement over this ‘discovery’ is an uncomfortable feeling. It feels akin to the ‘discovery of the new world,’ which was of course already known and occupied. Publications by and for communities of color may have been underutilized by historians, but I wonder if they would have been known, valued and referenced sooner if the history of computing as a field were itself more inclusive and diverse.”


Posted in Science and Technology and tagged Ebony