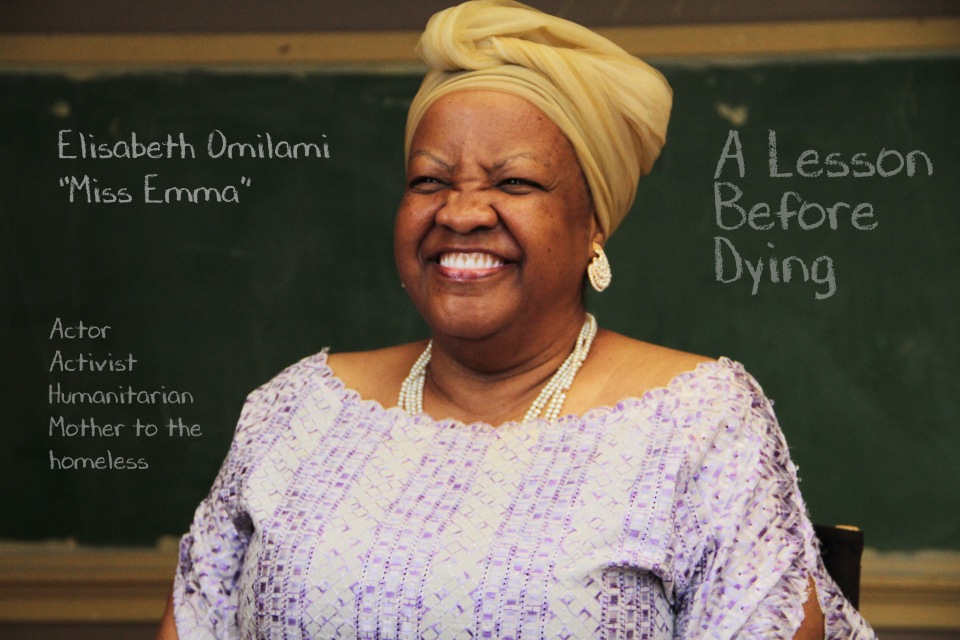 Elisabeth Omilami is an actress, activist, minister, and the CEO of Hosea Helps, helping meet basic needs of the working poor and homeless. She was raised in the Civil Rights Era as the daughter of activist parents, Reverend Hosea and Mrs. Juanita Williams. As a child of the Movement’s leaders, she possesses that same determined personality and her love for helping those in need also comes from seeing so much suffering in the world. She has traveled to bring food, medical assistance, and care to the people of Haiti, South Africa, and Kenya.

For years, Omilami has provided funding to a school in the Philippines. She is proud to be a Christian and a loving wife to actor Afemo, and a strong protector to her two children, Awodele and Juanita, and four grandchildren. Omilami’s 30-year history as an actress in film, stage, radio, and television is her heart, and she is so fortunate to have this opportunity again.

She’s taking on the compelling role of Miss Emma Glenn in Dominion Entertainment Group’s production of A Lesson Before Dying this summer in Decatur, Georgia. It’s her character from which the drama derives its name, as an innocent young Black man who is condemned to death learns how to die with dignity at the request of his grandmother.

“I’m honored to play the family matriarch. Emma represents so much of the good that Black women bring to this world. Pride. Strength. Love,” Omilami shares. “She’s an archetype society can never forget.”

Omilami is graduate of Hampton University’s theater department, has written several plays and has been in more than 40 films.

Rolling out chatted with the actress. Read more of what she has to say.

What drew you to this role?
This play is an African American classic, one that is not done often enough. Its theme: an unjust criminal system that oppresses African Americans.

Why is this story important?
We often judge wrongly before we have walked in someone’s shoes. [My] character is also instrumental to ensure that the unjustly accused godson “died like a man.” Even though we are often unjustly accused, we must still live with dignity, no matter what words are hurled against us and our families. We must show them they are wrong. The character of Emma Glenn is not only the archetypical Black matriarch but she has so many levels to her life. [She deeply reminds Omilami of her own grandmother whom she says also “worked for those people for over 30 years,” yet still maintained her pride and faith knowing that “though they slay me,” God is in control.]

What do you hope the audience will take away from seeing this play?
Compassion for the innocent, a realization and courage to teach our youth, whether the circumstances are preferred or not. More love for the least of these.

Are you working on any other acting projects currently or soon?
Yes. [I am] guest starring in the film The Best of Enemies, starring Taraji P. Henson as Ms. Ann Atwater. [Omilami performed the same role Henson plays in the film a few years ago.] Atwater is the African American leader who formed a friendship with the Grand Dragon of the Ku Klux Klan in order to implement integration, violence-free, in Raleigh-Durham, North Carolina schools.

What is next for philanthropist-actress-activist Elisabeth Omilami?
The creation of Ocean along with Afemo Omilami, and Omilami Center for Empowerment and the Arts Network, which will utilize various forms of the performing arts to bring out the gifting of many of our youth who have gotten lost in the system that denies them the opportunity to be all that they can be.


Posted in Culture and tagged A Lesson Before Dying, Ann Atwater, ku klux klan, The Best of Enemies