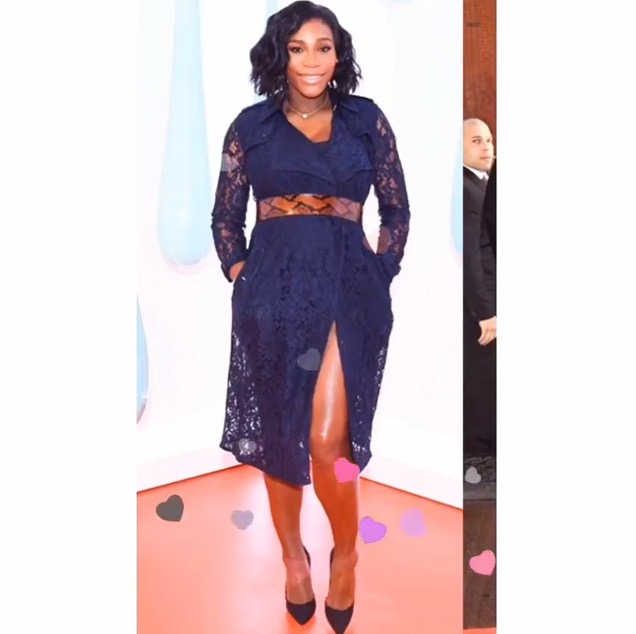 Serena Williams gets candid about nerves leading up to the birth of her child.

“I’m nervous about childbirth. I’m not a spring chicken,” she recently told Vogue. “The one thing I really want is an epidural, which I know a lot of people are against, but I’ve had surgeries galore, and I don’t need to experience any more pain if I can avoid it. But the biggest thing is that I don’t really think I’m a baby person. Not yet. That’s something I have to work on. I’m so used to me-me-me, taking care of my health, my body, my career. I always ask, Am I going to be good enough?”

Speaking of her career, believe it or not, the tennis superstar, who’s exhibited nothing but true power on and off the court, admitted she’s not fond of the word [power].

“In the beginning, I didn’t like it when they said that my sister and I were power players,” she revealed. “I thought, I don’t hit as hard as a Monica Seles. In Australia last year, I read that Maria Sharapova’s backhand and forehand are as good or better than mine and that the only reason I win is that my serve is bigger. I was like, wait a minute, please. I place my serve. And what about my volleys? My speed? I’m the player who’s hitting angles. I’m the player who moves you. I use my brain, and that’s really why I win.”

Though initially speaking for herself, Williams suggests she’s not the only woman with a negative attachment to the term. She added, “Not only me, but women in general sometimes feel that power is a bad word. As I’ve gotten older I’ve started to feel differently about it. Power is beauty. Strength is beauty. So now on the court, I want people to think that I’m powerful. But I also want them to be shocked at how I play. I want people to expect something, then get something different.”

As for whether she’s going to retire amid expanding her family, she said, “I used to think I’d want to retire when I have kids, but no … I’m definitely coming back. Walking out there and hearing the crowd, it may seem like nothing. But there’s no better feeling in the world.”

Instead, the 35-year-old has her sights set on defending her Australian Open title. “It’s the most outrageous plan. I just want to put that out there. That’s like three months after I give birth. I’m not walking anything back, but I’m just saying it’s pretty intense,” she explained.

“Obviously, if I have a chance to go out there and catch up with Margaret [Court, who has 24 major titles], I am not going to pass that up. If anything, this pregnancy has given me a new power,” Williams continued, commenting on records looming. Now, if motherhood isn’t motivation enough, we don’t know what is.

The 23-time Grand Slam champion is expecting her first child with her fiancé, Reddit co-founder Alexis Ohanian. The duo is due to give birth this fall.