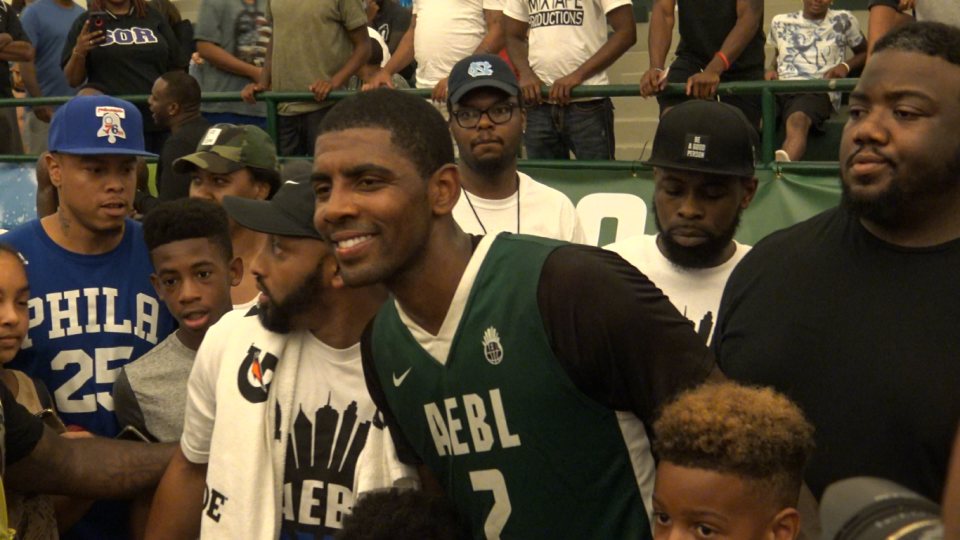 Kyrie Irving takes pictures with fans after a surprise visit to AEBL on Aug. 19, 2017. Photo by Rashad Milligan for Steed Media Services

The game was featured in the Atlanta Entertainment Basketball League (AEBL), which is hosting its Championship Weekend on Aug. 19-20. The AEBL is one of the summer’s biggest Pro-Am leagues in the country. Former NBA participants in recent years have included Lou Williams, Josh Smith, Paul Millsap, Dwight Howard, Kenneth Faried, Stephen Jackson, and Jerry Stackhouse.

Despite getting off to a slow start offensively, Irving had a couple of great spurts offensively. Getting to the free-throw line seemed to get him loose in the first half until his three-point shot began to fall. Just like in the NBA, Irving didn’t hold back his aggressive style when he felt that he had the hot hand on offense. There were two periods where he knocked down about nine points from beyond the arc in under a minute. Irving finished 12 points shy of Williams’ 54-point league record with 42 points of his own in the winning effort.

Los Angeles Clippers Montrezl Harrell had a nice showing. Harrell dazzled the crowd with thunderous dunks and blocks as if he was taking his frustration of being traded from the Houston Rockets this summer out on the ball.

Irving smiled and acted politely to every fan in attendance during and after the game.

Of course, the public appearance comes in the midst of his trade rumors. Irving avoided addressing the matter by heading straight outside of the school after a couple of moments, taking pictures with fans and having small talk with friends in attendance.

Full highlights from Irving’s performance will soon be uploaded on rolling out.