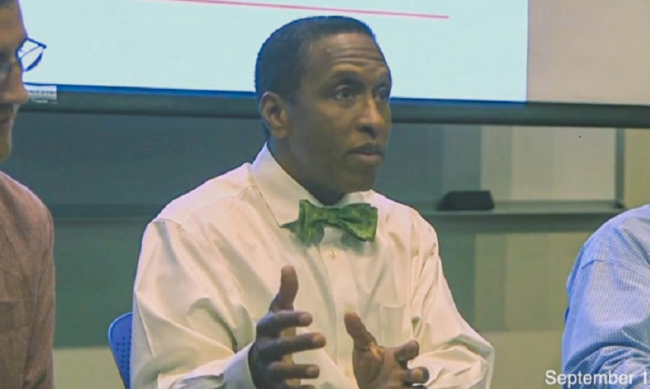 Grand Canyon University has suspended one of its professors, Dr. Toby Jennings, after he called for violence during a faith-based dialogue last September at the school’s Arizona campus. During the discussion, a member of the audience asked Jennings his thoughts on the Black Lives Matter movement about an hour into the conversation.

“You have folks that participate in it on one side that are very thoughtful about the matter and then on the other side, you have people on the opposite side of that who frankly should be hung.”

Jennings commentary drew an audible gasp from the audience and while he was given a verbal warning after the discussion because the panel was videotaped, a number of organizations including Black Lives Matters and the NAACP continued to speak out following the event, urging the university to take more serious action.

Jennings tried to explain his remarks but we’re not quite sure this qualifies as an apology:

Thank you, @realDonaldTrump for being mindful of a most important day in our nation’s history. https://t.co/spT60y9nRM

In the meantime, Brian Mueller, the university’s president, says Jennings was suspended for the upcoming semester but doesn’t believe the incident should reflect poorly on the school.

“As we continue our investigation, we will interview students who have attended this professor’s classes and students and guests who attended the forum to gain their perspective on this professor and this incident and why it was not brought to the attention of University executives sooner.”