For those new to the concept, masculine of center (MoC) women is a term developed by B. Cole of the Brown Boi Project, and refers to a segment of LGBTQ women who identify more with the masculine side of the spectrum than they identify with the feminine side. MoC includes a wide range of identities such as butch, stud, aggressive/AG, dom, macha, tomboi, trans-masculine, and androgynous. Rarely are MoC women provided the platform or afforded the opportunity to safely discuss life from their perspective. However, the Masculine of Center Conference (MoCC) has now made that opportunity a possibility.

MoC women were recently given a new, safer platform to share, celebrate and discuss their experiences. This past summer, Gin-I Dickerson hosted the inaugural Masculine of Center Conference (MOCC) at the HRC (Human Rights Campaign) building in Washington, DC. The conference aimed to empower, embrace and encourage a safe space for dialogue relevant to MoC LGBTQ women.

The conference, which was held in July, offered workshops that featured topics specific to the MoC community such as “Freedom, Hetero-Norms, and Bodies With Power” to  “Stud for Stud, Femme for Femme: The Politics of Lesbian dating.” While, other topics were applicable to everyone, such as “Money 101” to “Goal Cartography: Working Backwards Towards Success.” The popular session “Money 101” led by Deja Foster, was of particular importance given the LGBTQ’s approximate $1T buying power.

The breadth of topics encouraged attendees to open up about masculine privilege, class and culture, and everyday life for these women. One woman expressed that at work, she’s allowed into what are traditionally called “boys club” conversations and events because she presents herself as masculine;  whereas, feminine women, gay or straight, would not normally be invited. Another attendee challenged that, as much as there is privilege, prejudices are consistently encountered. She went on to say, “Being a MoC woman comes with misconceptions that I want to be a man, that we aren’t sensitive and have no emotions, and that we have to take on traditionally straight male roles like paying at restaurants or taking out the trash.”  Being masculine of center is more than just clothes and pronouns. It is identity and freedom.

The MoC experience, dynamic and varied, is often overlooked or dismissed. Androgynous model Orion explained, “There are very few spaces where it’s safe and positive to represent all the pieces of ‘intersectionality’ of each person’s identity.” Outside of expressing challenges, attendees used the conference to celebrate their MoC identity without apology and fear. As a feminine presenting gay woman living in Atlanta where there are gay affirming churches and HBCU’s supportive of LGBTQ communities, I partook in the conference with the understanding that my safe spaces are more plentiful.

In addition to MoCC, events such as Butch Voices in Oakland, The Andro Fashion Show in Atlanta and the DapperQ  fashion show in New York are all creating platforms to positively represent MoC women. Further, organizations like Brooklyn Boihood and Brown Boi Project as well as entertainment outlets that include StudvilleTV and Between Women TV are also creating safe and positive platforms. 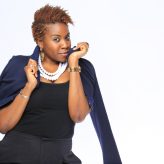 Grant is a quick witted, creative critical thinker who enjoys laughing and checking out vegetarian restaurants in various cities. Originally from NYC, she currently resides in Atlanta where she spends time consulting businesses on strategic initiatives and writing random musings. She is passionate about tasty food, personal prosperity, emotional health and happiness. She holds a BA in Advertising and Journalism from Temple University, and an MBA from Cornell. IG @Missimanig