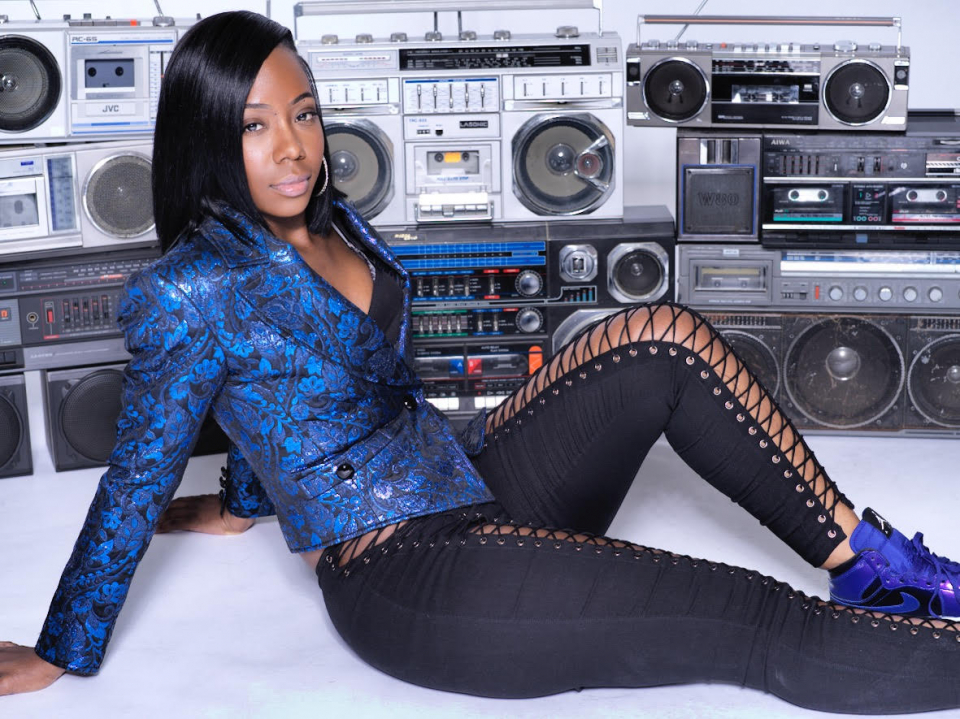 Two attributes make Chicago rapper K’Valentine stand out in the music industry: her resilience and willingness to hustle. K’Valentine finds herself in a city that is currently burgeoning and she is on the cusp of superstardom. With support from legends like Talib Kweli, the sky is the limit. We spoke to K’Valentine about her life, surviving a nearly fatal car accident and what is important to her as an artist.

Your skills are undeniable and there is no question that you are a real spitter. How was the transition from spoken word to rapping? Talk about how you did it.

Thank you, I appreciate that. Transitioning from spoken word to rapping took very little effort as the acronym for rhythm and poetry is rap; It’s essentially the same thing. What I did notice during my conversion was that I had to have more structure and more of a format than I was initially use to. But I went for it and haven’t looked back. I allow the production to begin the story and my lyrics to finish it.

How does being from Chicago influence your music and style?

Being from Chicago has provided me a great deal to speak about in my music. From growing up in one of the most segregated cities in the U.S., to experiencing first-hand how gang/gun violence plague the inner city urban communities, to having our first African American president reside here and deliver so much hope to the youth. On top of that, Chicago is the city that works and it’s super swagged out.

You are currently working with one of the most pure emcees in hip-hop, Talib Kweli. How did you get signed to his Javotti Media label?

Talib had a show in Chicago at the Metro and I got tickets to attend. I was able to get backstage and meet him, I told him I rapped then he invited me to come by his party and play some music … so I did and the rest is history!

What have you learned from Talib? What would you say is the greatest lesson he has shared with you thus far?

I was privileged to see you perform last year at The City Winery in Chicago and when you first hit the stage you seemed a bit shy and reserved, but as soon as the beat dropped, you turned into a different person. Talk about what happens when you hit the stage, what makes your performance special?

Whenever I hit the stage my goal is to exhibit the exact same feeling performing the song as I felt while writing it. I need the audience to understand that these are truly authentic stories. Any nerves, stress or worry exits once the mic is in my hand.

Congratulations on being the opening act for Yasiin Bey (formerly Mos Def) in Chicago coming up.  I hear the show date is an important anniversary for you, can you tell us about that?

Yes, the show with Yasiin happens to take place on Sept. 21, which will mark the two-year anniversary of my car accident. On Sept. 21, 2015, I was hit by a drunk driver who was going over 100 mph. My car spun around twice, flipped over twice and then landed upside down in the exit ramp. Surviving that kind of accident, which is uncommon, is what inspired the title of my recently released debut album, Here for a Reason.

Do you feel like you have something to prove because you are a woman who raps?

Nope not at all; though I do feel as if I have a void to fill.

Talk about your latest release “Here for a Reason” what is it about and what it reveals about you as a person, as an artist?

You have features with Tweet and Styles P along with your mentor Talib and Chicago soul artist BJ the Chicago Kid. Who would be your dream collaboration?

I would have to say Jay-Z hands down. Although there are multiple artists I would love to collaborate with, he represents all that I want and hope to attain musically and more. He’s been around since the Tupac and Biggie era and continues to dominate creatively and business wise and to top it all off, he married Beyoncé, whom I love. I’m part of the beyhive.

Who’s your favorite Chicago rapper and why? Can you give us your top five dead or alive?

My favorite Chicago rapper would have to be myself. For real. After that, if we’re speaking specifically of top five Chicago hip-hop artists, I would have to say Twista, Kanye West, Vic Mensa, Common and Lupe. Tupac is the GOAT!

What does success mean to you?

Success, to me, is conquering goals that you have set for yourself, at the pace and level that you are content with.

What is next for you and your career?

What words of encouragement do you have for those wishing to pursue their dreams?

Keep God first. Stay true to yourself. Study those who are already in the position you aspire to be in. Believe in yourself. Have faith. Put in the work. Don’t wait for opportunities, create them. Appreciate every inch of the process and progress. Then watch how those doors open for you. I would also tell them to go get my album, Here for a Reason, and follow me on Instagram: @itskvalentine.