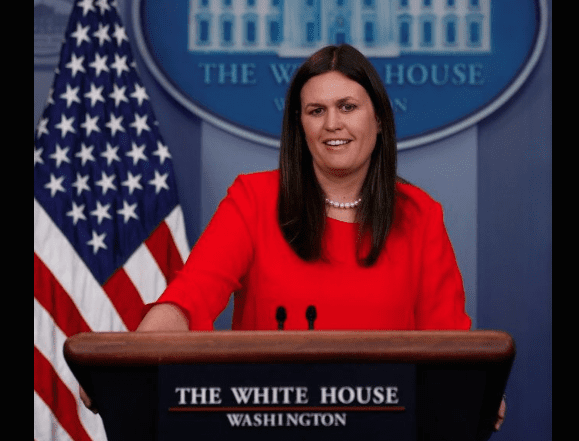 White House Press Secretary Sarah Huckabee Sanders could find herself behind bars for giving her opinion on a journalist who gave her opinion. Days after ESPN’s Jemele Hill was blasted by her company for stating on Twitter that Donald Trump was a “white supremacist,” Sanders shared her thoughts on the matter during a briefing at the White House.

According to federal law (Title 18 of the U.S. Code), government employees are prohibited from influencing the employment decisions or practices of a private entity or company solely on the basis of a partisan political affiliation. Sanders could possibly have called Hill’s comments inappropriate, but she broke the law by saying that it was “fireable.”

Sanders’ offense could lead to 15 years in prison and a lifetime ban from holding a public office as the law states that violators, “shall be fined under this title or imprisoned for not more than 15 years, or both, and may be disqualified from holding any office of honor, trust, or profit under the United States.”

Following Sanders’ words against Hill, the Democratic Coalition filed an ethics complaint against Sanders and will call for the U.S. Office of Government Ethics to investigate Sanders’ alleged violation.

The Trump administration continues to trip over itself in numerous ways. Their alleged ties to Russian hacking; their ties to White supremacists; the Muslim ban, the DACA decision; their choice to leave the Paris Climate Accord; Trump’s response to the Charlottesville, Virginia, terrorists; and Trump’s failure to pass any significant legislation have caused the first nine months of his presidency to be a disaster. If Sanders is found guilty of a violation, it would be another issue for an administration beset with difficulties.

Sanders later claimed that she isn’t calling for ESPN to fire Hill, but it’s something “they should decide.” Trump is seeking an apology from the network and tweeted, “ESPN is paying a really big price for its politics (and bad programming). People are dumping it in RECORD numbers. Apologize for untruth!”