Author Taura Stinson has penned a new book for Black girls and women that is a combination of guidance, love and motivational tips. A platform to gather sisters, “This is perfect timing because we need to armor ourselves with knowledge, 100 Things Every Black Girl Should Know has so much knowledge to soak in,” says Stinson who wrote this book “with hopes that it would inspire girls and women of color to be their absolute best and avoid some of the monumental mistakes that I have made and/or observed.”

Born in Birmingham, Alabama, and raised in Oakland, California, Stinson has seen and learned a lot growing up as a young, Black woman. She has penned songs for Destiny’s Child, Kelis, Kelly Rowland and Deborah Cox as well as film soundtracks: Men In Black, Black Nativity and the title song “Beautiful Creature” for Rio 2 among others, with her writing partner Raphael Saadiq.

Read what she has to say.

What’s the story behind the title?
Honestly, the title was shaped into a numbered list as I was writing my outline and it stuck. I could have called it 1000 Things Every Black Girl Should Know, but I wanted to make sure that the information was attainable and not overwhelming. 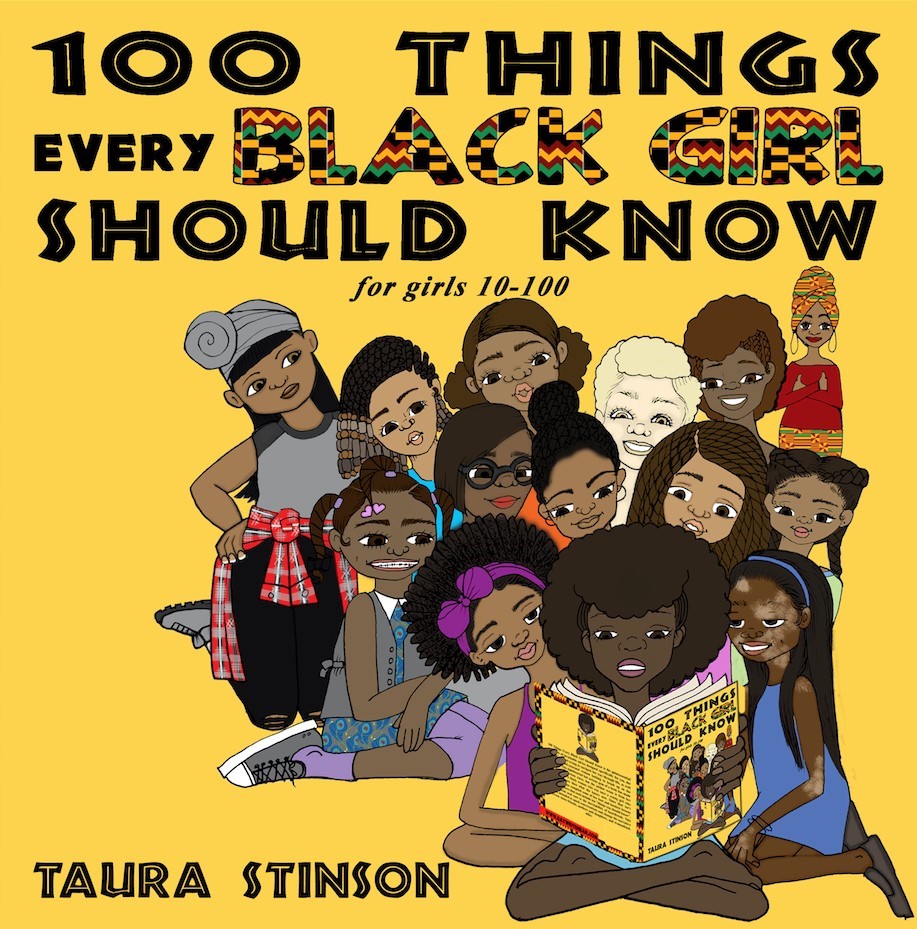 What do you hope readers will learn from reading your book?
The book isn’t just for little little girls. The subtitle of the book is for girls ages 10-100 and the feedback that I have gotten so far has almost reached the end of that demographic. My Mom shared it with an 85 year old woman who couldn’t put it down and spoke of how valuable the book would be to any girl or woman that reads it and that’s what I want, for it to be valued. Not on the shelf/fine china, valued. But for it to be marked up, highlighted, shared, taken to slumber parties, church groups, college, given to divorces, new wives, etc. That kind of thing, like an heirloom. It’s intended to be a conversation starter between mothers and daughters, fathers and daughters, peer to peer and the most important conversation of all, the conversation with ourselves.

How long did it take you to write this book?
It took more than a year. I had a vision for every part of it and was very meticulous about each component. I knew what I wanted the illustrations to look like and the amazing illustrator Adahh Glen and I went back and forth countless times until each girl felt real.

What was your regimen to complete this book?
I write every day so I spent less time journaling my private thoughts and reapproached it with readers in mind.

How did you arrive at this career choice? Was it a deliberate decision or a gradual and natural evolution?
It was definitely gradual. I wanted to be a journalist/novelist when I was younger, so I have been writing stories since I was a child and those stories became songs, so I kind of look at this new junction in my career as songs without melody…they all come from the same place in my soul.

What separates you from others in your field? What is unique to the experience that you create?
Well, I’m Taura Stinson and no one else has lived this life. I think that is what separates us all, that we all have a unique view that we offer to the world. Part of that view for me is that I have lived a pretty interesting life as a songwriter, A&R and was a even a celebrity personal assistant, so I have learned from some interesting people and have seen the good, bad and hideous sides of this business and life in general.

For those considering entering this arena, what skill sets do you recommend mastering? What traits are most conducive to success?
I feel that being passionate about whatever is that you do is key. I love music and words, period…they are a part of me. When I knew that I would be a songwriter, I wasn’t blinded by the sparkles of show business. I knew that it would be hard work and I came in ready to work. Never expect anything to be given to you. Success comes to those that work hard for it. The kind that really sticks has dirt on it.

How do you stay at the leading edge of your craft?
I am not always on the leading end of my craft. I stay in it by being down sometimes and those feelings have written me out of a rut sometimes. This business is famine or feast, and I have experienced both.

Do you think that there are any widely held misconceptions about what you do? If so, what are they and how do you work to dispel them?
There are numerous misconceptions about songwriters and authors. As a songwriter, the number one misconception is that a few platinum records make you rich light years from the truth. As an author who has released and independently published book. It’s not common knowledge. Hire a consultant and read every blog and book that you can find on self-publishing. It has been so helpful to me.

How do you map out your goals? How do you measure your success?
I write everything down, either in a journal or on my phone, but mostly in my heart. My success is measured in various ways, but mostly by making my parents and family proud.

Who do you consider to be your peers in your field? Who do you see/use as examples for you to emulate? My long time co-writer Raphael Saadiq is someone to emulate. I love how he has rebranded himself as the go to person to score films and TV shows all while still building his music empire. I am not familiar with anyone who is doing the same thing in the literary and music industries.

Name two of your top role models: one from your industry and one from outside of it.
Inside of my industry, there are too many to name. I love Frank Ocean … he paints stories and has the illest play on words ever. I would love to write with him. Outside of my industry, Oprah Winfrey is just everything. I have loved her since I was a child. She grows and grows and seeing her growth as been important to my own.

Name three books, works, performances or exhibits that changed how you view lif, yourself or both.
When I was a little girl, I saw a theatre performance of For Colored Girls Who Considered Suicide When The Rainbow is Enuf by Ntozake Shange. It was the first time, dance, the beat of the drum and the most powerful words that I have ever heard, jumped in a pot together and made food for my soul. Musically, each and every time I hear or read the lyrics to “Pearls” or “Like a Tattoo” by Sade, it hits me like the first time. She’s the goal. She could care less about clubbing or shaking anything but human consciousness. The other thing that gets me every time are quotes, speeches and words. I collect them like some would jewelry or dolls…just as precious to me. Langston Hughes said, “I’d rather be a lamppost in Harlem than Governor of Georgia.” So descriptive, that you actually rationalize the upside of being a lamppost. That’s the kind of impact that I want to make.

Why do you consider continued learning important?
It’s so important because no one knows everything. Everyday above ground is another chance to grow. The opposite of growth is what we don’t want.

What affirmations do you repeat to yourself that contribute to your success?
Believe – Become. It is my truth and it works both ways because we will become what we believe, good or bad. I have been both.

What role does technology play in your day-to-day life? How do you utilize it?
I am attached to my phone, but not for texting and social media. I literally have to schedule that to remain interested, but my voice notes and note pad is filled with ideas, melodies, thoughts, lyrics, quote and observations.

What software, app or other technological innovation has made the biggest difference in your life and/or career?
Voice notes and reminders. Siri is the best personal assistant, ever.

Please define your personal brand.
On my website, I have a tab for my blog and it’s called “Eat-Write-Hear.” I was so excited when I came up with that name, because anyone that knows me knows how “me” that really is. I am a real problem in the kitchen and could definitely battle the best of the best. Don’t believe me? Meet me in the kitchen. The other two words sum up the other two things that I would do for free, writing and music. With that said, I suppose my brand is meant to include all of the senses.

What is your favorite vacation destination and why?
I travel fairly frequently, but consider vacation a place where I can catch up on rest and the local culinary and cultural scene in front a backdrop of crystal blue water and white sand, where ever that is from Bora Bora, The Maldives, the Ivory Coast or the Carribbean; count me in.

If you could change one thing about the world, what would it be?
That we all could really love one another. There’s no racism, classicism, sexism or terrorism in love. That would solve everything.

If you could change one thing about yourself, what would it be?
I want to make not just ripples, but waves in this sea of change. So, I wish that I could expand my reach. I wish it were longer, wider and my voice louder, my pockets deeper. Whatever it takes to fix the broken and heal the wounded.

What does it take to be iconic? In your estimation, who has achieved that status?
Barack Obama is iconic. We turned on the TV every day for eight years and saw greatness standing before us. He and his family reminded us that with hard work and education, anything was possible. He didn’t do it without scrutiny. In fact, he faced more than the 43 Presidents that preceded him, but he did so with style, grace and a level that we can all aspire to. The word “icon” is used so lightly these days, but President Obama was, is and will always be a true icon. How Kelly Rowland is celebrating the holidays early