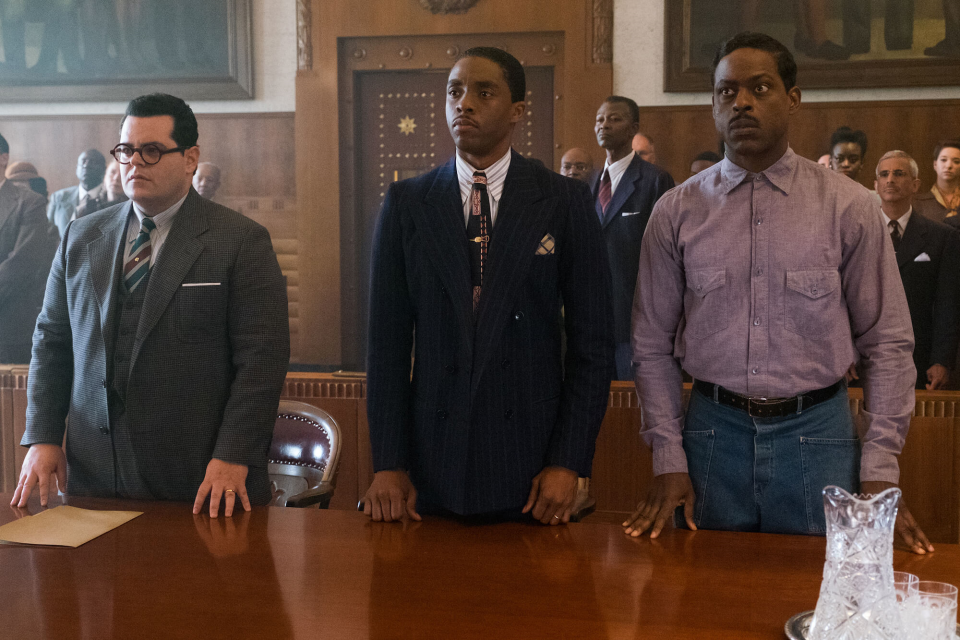 Marshall, a both enjoyable and educational film about African American pioneer Thurgood Marshall, stars Chadwick Boseman, Josh Gad, Kate Hudson, Dan Stevens, and Sterling K. Brown. Rolling out sat down with the stars of this must-see film as well as with director Reginald Hudlin. Here are excerpts from that interview.

What about this film led you to take on the role as co-producer?
CB: When you play the lead of a movie, you are a producer, especially the way that I do it. You throw everything that you can into it, your whole being. You’re concerned about every aspect of the film. Every department. You’re giving notes on the script, you’re present when investors come and say that their interested in giving money to the film. You’re shaking hands and kissing babies. You’re a producer. So whether they give you the title or not, a lot of times you’re doing it.

Would you like the White House to see this film?
CB: I have a line in the movie that’s something which is actually something Thurgood Marshall said, “It’s not fire that I’m chasing, it’s fire itself.” You want to catch fire. You definitely do the film because it caught fire. The film, the script, and what’s in it, you do it because it lit a fire inside of you and you want to light a similar fire inside the people that see it. That same message is there regardless if we had done it during the Obama administration as it would be during the Trump administration. For me, it’s not necessarily about the fact that well Charlottesville happened so I want people to get this message. The message is the same regardless.

Why did you decide to take this role?
Sterling K. Brown: I think about the ideals on which this country is founded in terms of all men being created equal and how the ideal and the actual practice of that in this country have had a bit of a schism. You have this man, who is not a perfect man in Joseph Spain, who is accused of a crime, and because of the color of skin and because of his imperfect life, it is all too easy to presume him guilty. You almost have to prove your innocence in this country as an African-American male when you are supposed to be proving guilt.

Marshall is in theaters today.