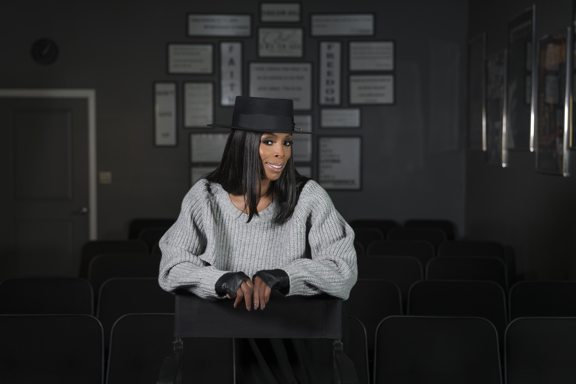 Actress, now director, Tasha Smith is a woman of talent and passion. Her multiple acting credits on television and in film have made her far from a rookie in the entertainment industry. As a director, Smith is using her platform to not only explore new experiences in film, but to also reach out to aspiring actors via Tasha Smith’s Acting Workshop (TSAW) in Los Angeles, California. Smith’s devotion to acting and empowering others is what drives her career as a teacher. Her desire to educate as many aspiring actors as she can led her to take TSAW to Atlanta and New York for a three-day workshop series. Here, Smith will lead and teach important skills, techniques, and principles behind becoming a great actor. Read Tasha Smith’s interview with rolling out below.

What is it like preparing for your different roles?
I have a process that I go through based on a technique that I teach at my school TSaw. I feel like we need a blueprint as actors, and the blue print that I go by when I’m starting any role is based on what I call the ‘12 Step’. You have to have an understanding of what your character’s overall objective is in the movie or TV show, then understanding what each scene objective is. Every role I have a process, although every character is different. Some characters require more research, some require more personalization, some more biography of the character. I feel like acting tools and preparation is like building a house; you have a tool box, and those tools are used to build. It’s like you’re a carpenter, and based on what you’re building, that’s what tools you’re going to have to use. I just say that as an actor, you should always have your tool box filled with options.

What would you say are the most important tools that you carry personally?
I think the first thing is really being able to identify with the character. Empathy is a tool, personalization is a tool, and you always have to be clear about what the character’s objective is.

Most recently, your film When Love Kills aired on TV One, but you wore the director’s hat instead of having an acting role. What made you want to step out from the direct spotlight and work behind the camera?
I’ve been wanting to direct for a long time. A part of me teaching acting, is not just me teaching, but it’s also me exercising my directing skills. It’s something that I’ve been looking to do for a while, and TV One presented it to me. Also, a lot of times us as artists are looking for ways to work out our own pain, and I feel like the story in ‘When Love Kills’ is something that me being a young girl from Jersey, encountering predators, could relate to. It is a powerful story, and as actors we look for stories that we can be honest with. Either as an actor, or as a director, honesty is important, and being grounded is important. Viewers tend to relate to things that they believe and see the grounded truth in.

What is something that you think the audience/viewers of When Love Kills can relate to?
I think they can relate to Felicia’s vulnerability, and her need to be loved. I think everyone has that everyone has that overall want to be loved by someone whether it’s their family, friends, loved ones, husband, wife, girlfriend, boyfriend, lover, children, whoever. People can identify with the need to be loved. I think it also made the audience look at themselves and think “wow, how far have I gone to be loved?”. Everyone hasn’t committed a murder, but everyone can look at past relationships and think about the things they went too far with.

Has your appreciation for film and production changed since being able to experience being an actor and a director?
Are you kidding me? Absolutely. I already had an appreciation for it as an actor, but as a director, you really have to focus on every aspect of it. You have so many different responsibilities, and as an actor we don’t have to worry about anyone but ourselves; we can be selfish sometimes. It’s a lot more work and responsibility as a director, but I love it. It’s creatively stimulating. I also have an episode of Tales that I directed. It’s the ‘99Problems’ episode, and it airs on October 24th.

Your acting workshop will be in Atlanta Oct. 27-29, then in New York Nov. 10-12. What was your purpose in creating these workshops for aspiring actors?
I’m here to inspire and empower people to pursue the arts. It’s for the actors, but it’s also for me because it’s an exchange of me empowering and teaching them techniques so that their confidence is high when they go into these auditions, while I get the pleasure of seeing them being empowered as an artist. A lot of times, all we need is confidence. When we have tools to build, our confidence is high and you can walk in an audition or a job and be honest and tell the truth based on what you know about the character. It’s all about empowering people. Also, I plan to direct a lot more, so I’m excited to see all this new talent. Even in the movie I directed, I got a chance to hire people that others are not familiar with. For example, I hired Floyd Mayweather. People are familiar with him as boxer, but not an actor. As a teacher, I get to experience different people that the world may not know yet, and I get to expose them first to the field of acting.

What is the tone you like to set in your classes to ensure that your students are comfortable and able to open up without feeling judged?
When we get in class and those doors are shut, it’s almost like we’re in church, and whatever it is that I have to preach to get people comfortable, I’m doing it. It’s a very intimate, and safe environment, and I think that from my testimonies that I plan on sharing with my class, it will allow everyone to open up. I call my school the “church of acting” because it’s somewhere where we can get freedom, deliverance, and empowerment. It’s something that I feel is a part of my calling, my purpose, and it’s something that I’m very passionate about doing. Because of my passion, and my desire to help, I try to be in tune with everyone so I can get them to open up.

A lot of people, are looking for overnight success stories and want to wake up and be the next big thing. What would you say to those that are looking to grasp their quick claim to fame?
It’s unrealistic. When people come to my workshop, I hope they’re not coming to get a job. I hope they’re coming to be taught, and prepared for the opportunities that are on the way. People who are pursuing an acting career have to understand that preparation is as important as the opportunity, and the opportunity is not more important that the preparation. You have to be prepared and unfortunately, the people who have that unrealistic idea get into situations where they find out that they aren’t as prepared as they thought they were. If try to rush your career, you’re going to end up killing your career because of a lack of preparation.

How can people register for your class?
Log on to www.tsaw.com