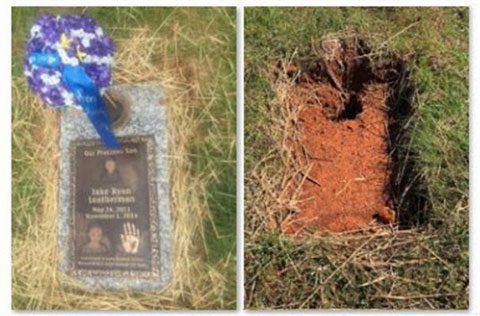 The death of a child is traumatic for any parent and funeral arrangements can be a financial burden. For one Hickory, North Carolina couple, an unpaid bill from their 5-year-old son’s funeral has come back in a very unpleasant way.

Last November, Wayne and Crystal Leatherman buried their son Jake, who died after a battle with leukemia. The couple stated to media outlet WALB News that they paid in full for a tombstone for their son; however, the monument company,  Southeastern Monument owned by the Rev. J.C. Shoaf, claimed the couple made changes to the marker and did not pay the additional costs incurred. According to Shoaf, he allowed the tombstone to be picked up and placed anyway out of compassion for the couple’s circumstances and loss.

Shoaf stated, “Because they had been through so much emotionally, grieving so hard, I thought we’d just go ahead and do it.”

However, the Leatherman’s stated they were not aware of any additional costs. Crystal Leatherman stated, “If I would have owed him the money I would have paid him. This is not something you argue over.”

In reaction to the disputed amount not being paid, Shoaf removed the tombstone from the grave of Jake Leatherman. The family did not know that the marker was removed until Crystal Leatherman went to visit her son’s grave.  Now, the family is shocked and angry. Crystal stated, “He repossessed it like it was a car. This is my lowest point. He doesn’t care.”

The family intends to hire an attorney and sue Shoaf over his insensitive actions, but Shoaf says it’s a matter of principle. “If you buy something, you’ve got to pay for it. No matter what it is,” Shoaf said. He claims he wants to work out an agreement with the family, but the Leatherman’s have decided to order another tombstone with a different company.

This week after the story was made known to the public, Shoaf relented and stated to media on Tuesday, “We waive all expenses from the Leatherman family. If there are charges to be paid to the cemetery to have this reinstalled, we will pay all expenses for doing that. … In hindsight, it was a big mistake to have the cemetery remove it, we see it now, but we do offer the family our condolence and forgiveness … we hope they forgive us. It has hurt everybody involved, and we hope they have it in their heart to forgive us for it. Our prayers are with the family, and we hope we can be friends down the road.”