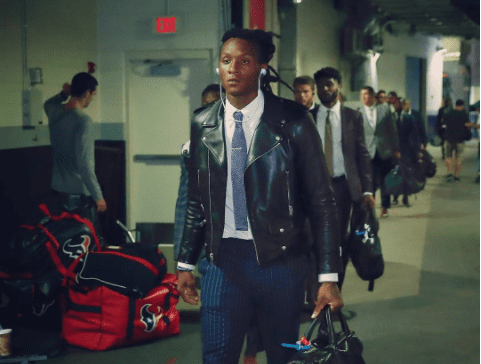 NFL star DeAndre Hopkins took a stand after racist comments by the Texans owner Bob McNair. According to ESPN, Hopkins skipped the team’s practice after McNair’s comments were publicized.

A report by ESPN the Magazine revealed McNair’s racist words. During a meeting with players and owners in New York on Oct. 17, McNair, who is also a Trump supporter, told the players and owners, “We can’t have the inmates running the prison.”

McNair’s statement basically compared NFL players to criminals and slaves. Slaves did not have the right to protest in any form and they faced being punished or lynched if they attempted to revolt. It’s a mentality of keeping Blacks “in their place” and restricting rights that are granted by the First Amendment.

McNair issued an apology by saying in a statement, “I never meant to offend anyone and I was not referring to our players. I used a figure of speech that was never intended to be taken literally. I would never characterize our players or our league that way and I apologize to anyone who was offended by it.”

However, the damage was done.

Hopkins wasn’t the only player who was upset with the Texans organization. Several players were considering walking off the field until they were “persuaded” to remain at practice, according to Sarah Bishop of ESPN.

Texans players will meet to discuss a plan of action before Sunday’s game against the Seattle Seahawks.