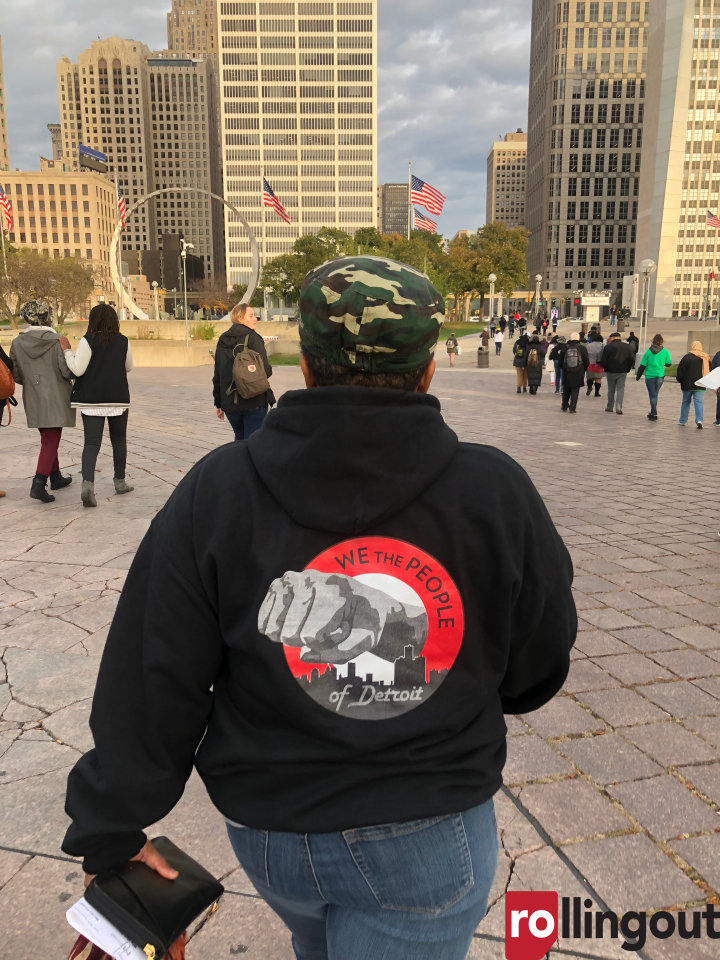 We won’t sit down.
We won’t be quiet.
We won’t take up less space.
We are #ReclaimingOurTime

This statement embodies the energy at the inaugural Women’s Convention in Detroit this weekend. Birthed from a need to restore humanity, this massive event is an offspring of the historic Women’s March. Thousands of women — and some men, have converged on Cobo Hall for a weekend of workshops, strategy sessions and inspiring forums. It is expected to bring together first time activists and movement leaders, rising political stars that reflect our nation’s changing demographics, and thousands of women who’ve organized sister marches, huddles, rallies and resistance actions, large and small, since January 2017. Issues at the forefront of the event’s focus include intersectionality, gender and pay equality, women’s health, and education.

Yesterday, the opening processional hosted a small gathering at the Gateway to Freedom on the Detroit Riverwalk. The peaceful ceremony summoned a spirit of empowerment and determination to be our own agents of change.

As the sun rose over the Detroit River, chants of “Ashé” and tribal drums filled the morning air while the the crowd honored our ancestors with libations, meditations and prayers. Those present were urged to wage love globally. It was a moment of spiritual connection shared by people of various ages, cultures and backgrounds. Poignant speeches from local and national leaders, activists and residents set the tone for the movement to continue far beyond this weekend. It was a call to action to begin reclaiming our time. Time stolen by countless threats against humanity such as misogynism, racism and greed.

The convention’s tagline/hashtag “Reclaiming my time,” which was c

oined by Congresswoman Maxine Waters, has evolved into a multi-dimensional mantra.

For ecojustice activist Dortheá Thomas, reclaiming her time is about “Reclaiming your humanity; reclaiming Black womanhood; reclaiming who you are. I still can fight for myself, I still have a voice,” she said. Thomas who recently gave birth to her daughter, has a responsibility to instill value. “It was so important for me to start reclaiming my time and start recognizing who I am because I have to teach her what it means to be a Black woman. To live in her true, authentic self and not be afraid and ashamed of who she is.”

Thomas vowed to teach her daughter that ” … she is one of the most powerful beings on the planet. I want her to know that she can reclaim that power. That no one can take that away from her and no one can make her feel inferior as long as she knows who she is,” she said.

Host committee member, Fatou-Seydi Sarr, who is a native of Senegal, has waited awhile to reclaim what she has lost. “I have so much thing [sic] to reclaim. I lost time myself because as long as I have been in the U.S., I have been engaged in one or another form of fight,” she said. “I’m a Black woman, so all Black issues come into my way. I’m a Muslim woman. I’m a single parent.

“When you do thing [sic] people always ask you, ‘Why you doin’ that? Why do you need to fight for this? Why you always fussing, Seydi?’ Why this, why that. So reclaiming my time is my answer to all those whys.”

“Decide that you will not allow these three days to be just any old convention … let’s reclaim our country, let’s reclaim our humanity,” urged self-proclaimed “Water Warrior” Monica Lewis Patrick. Patrick is a longtime advocate and activist for the water crises in Detroit and Flint.

One of the organizers of the national Women’s March, Carmen Perez shared her appreciation for the hard work put into bringing people together from all over the country. “We as women, we want everything to be inclusive and intentional,” she said. She reminded those present to “Build with your sisters, build with the people who are coming from all walks of life.”

The speakers also acknowledged the importance of the Me Too movement, which is raising awareness of survivors of domestic and sexual abuse. The ceremony ended with the attendees locking arms in solidarity while “Bridge Over Troubled Waters” by Aretha Franklin played.

Visit www.womensconvention.com for a full schedule of plenaries and speakers. 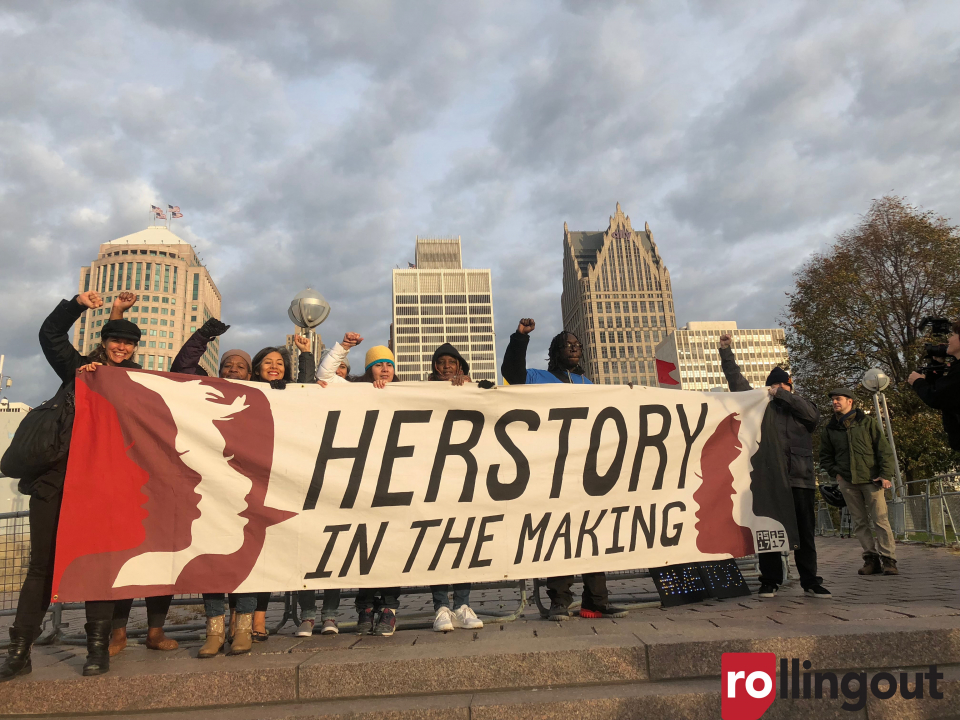 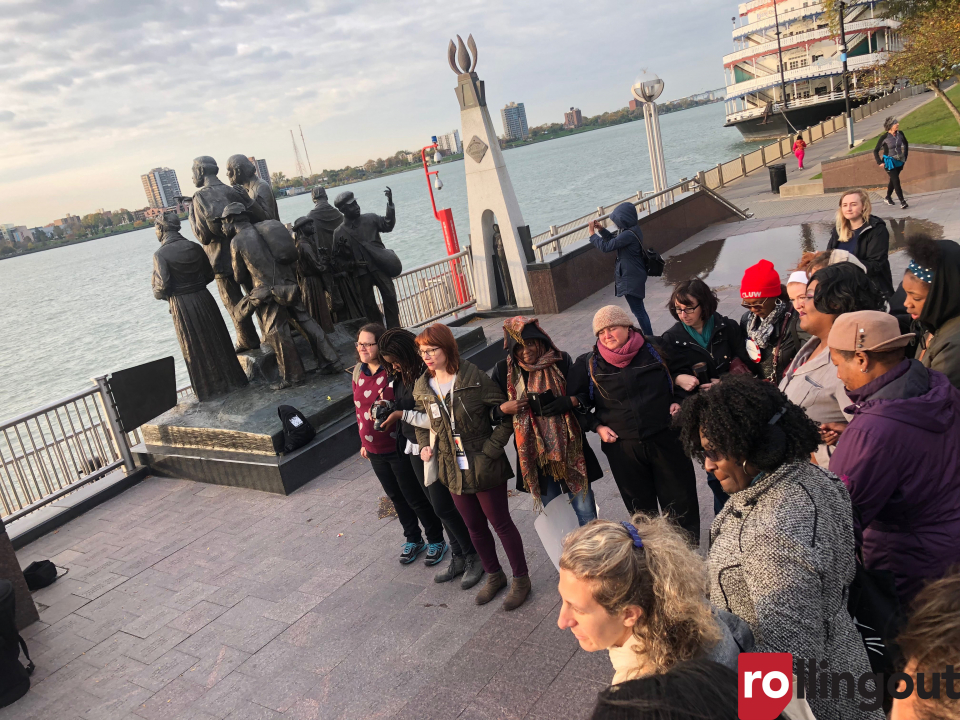 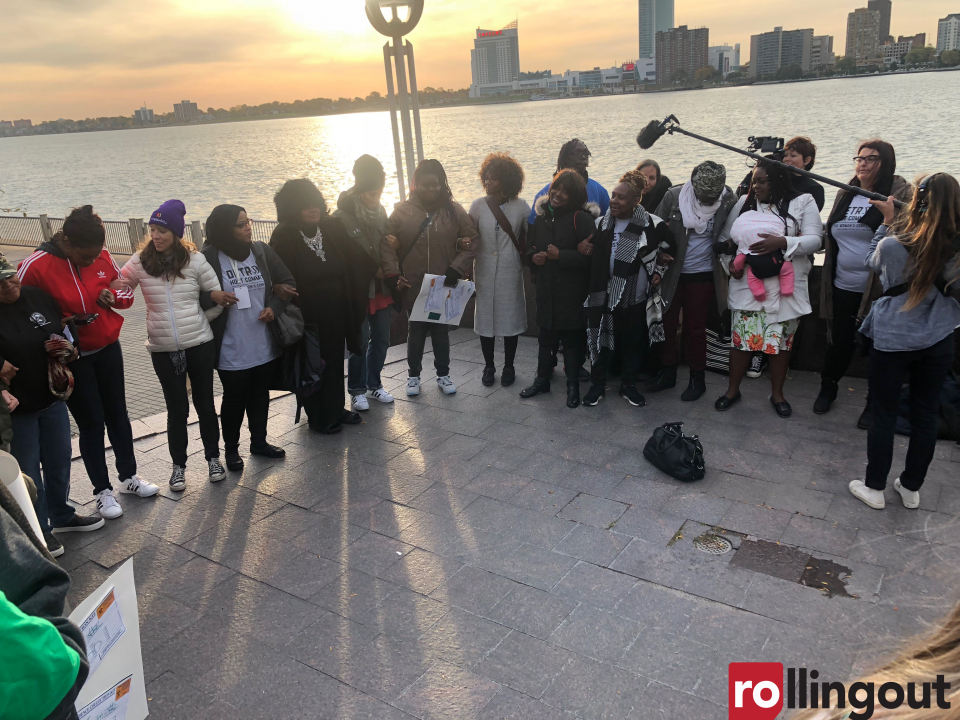 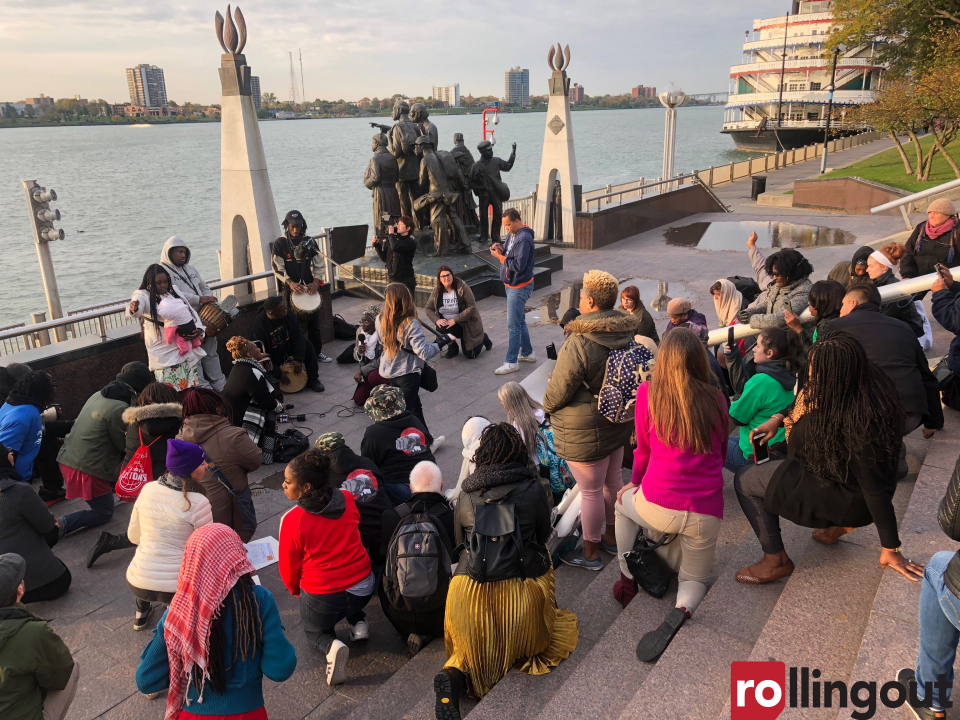 Taking a knee for the fight against injustice 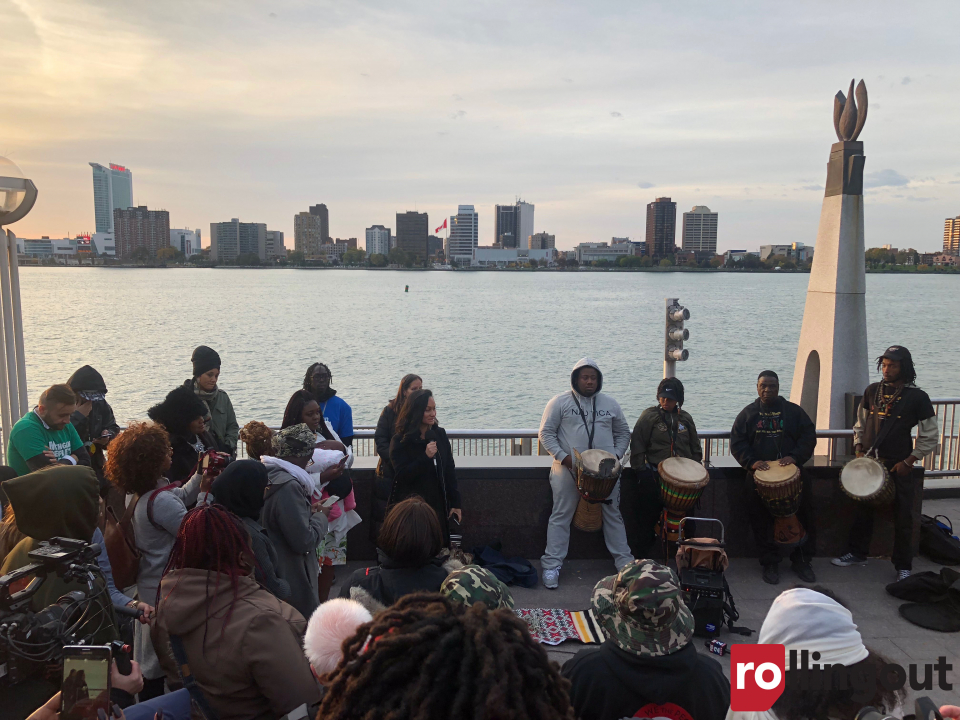 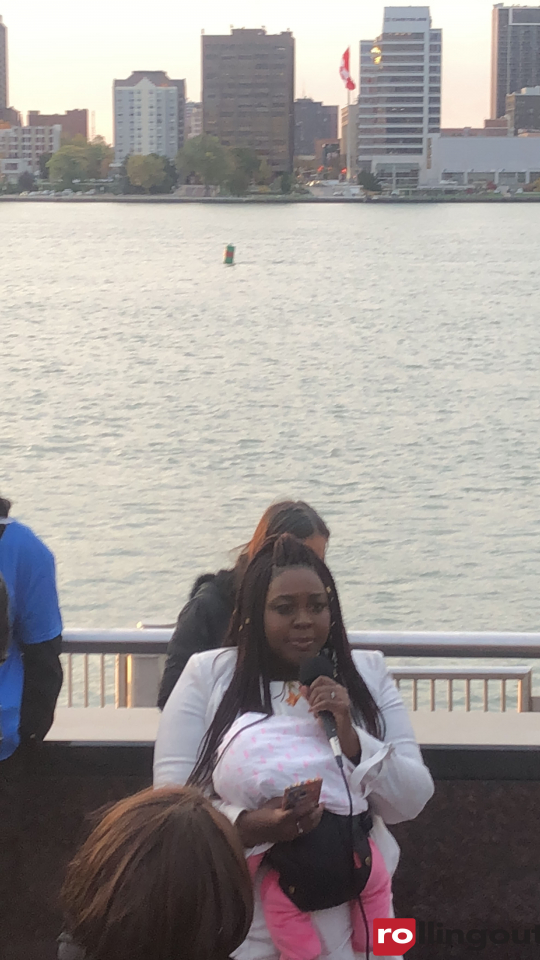 Dorthea Thomas with her 3-month-old daughter 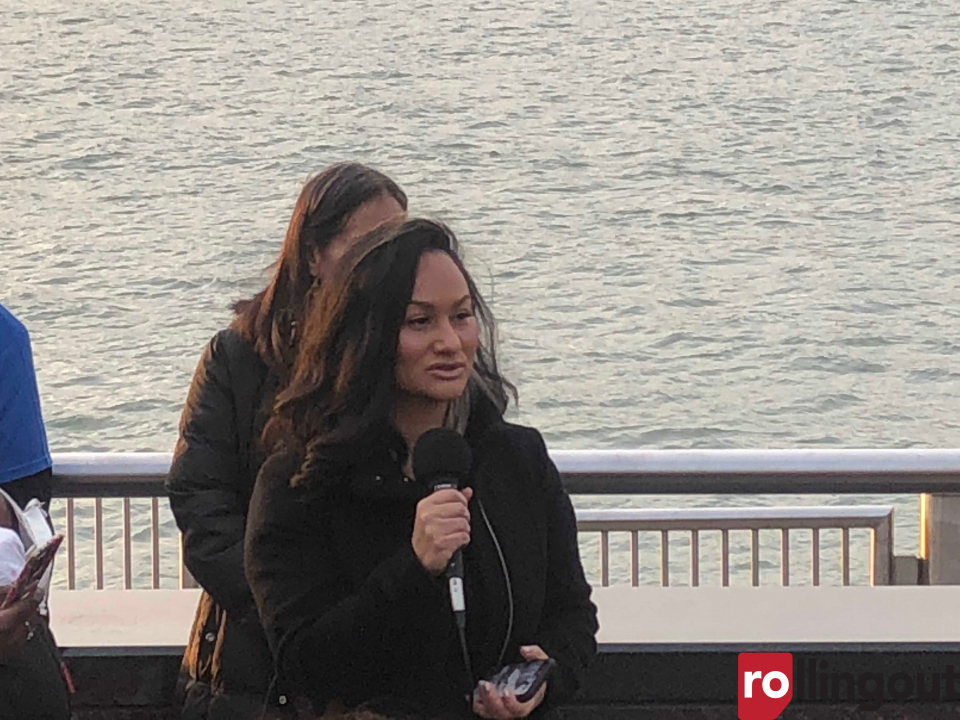