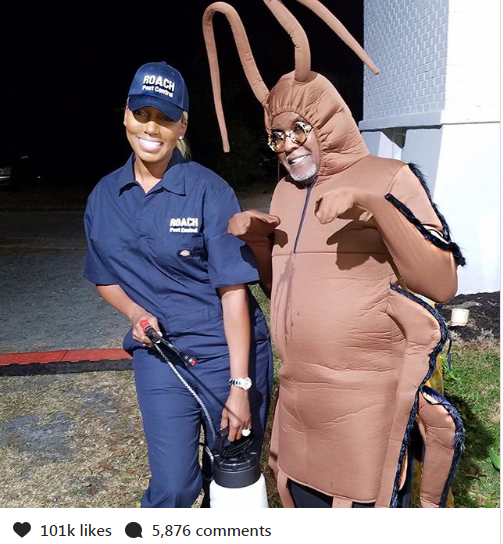 NeNe Leakes seems to always get the last laugh in any “Real Housewives of Atlanta” feud — especially when fracas involves Leakes and her friend-turned-nemesis Kim Zolciak Biermann. Since Zolciak-Biermann is going to accuse the Leakes of harboring roaches in their home, they decided to show up at a party as the insects.

Leakes and her husband, Gregg, attended a “RHOA”-sponsored Halloween party as an exterminator and a cockroach, and the picture of their costume has since gone viral on social media.

Leakes, who was the exterminator to her husband Gregg’s roach, didn’t outright reference the ongoing drama between herself and Zolciak-Biermann in the picture of their costumes, but it’s pretty clear the costumes were throwing shade in the blond bubblehead’s way.

“Roach Pest Control in full effect,” she captioned under the photo she posted on Instagram.

The latest drama between Leakes and Zolciak Biermann was ignited when a video that Brielle Zolciak posted to Snapchat that allegedly showed roaches in the bathroom of Leakes’ luxury house.

Leakes started breathing fire and returned insults. She called out Brielle Biermann as “racist trash” and responded with a since-deleted Instagram post: “We don’t have roaches! If you found 1, u brought it with u or it fell outta yo funky p—-!”

Zolciak-Biermann immediately went into lioness mode and came to her daughter’s defense and posted a screenshot of a conversation, saying: “She removed the video immediately!! I was filming as an INVITED guest at @neneleakes for RHOA!! Brielle was invited as well! Brielle went to the bathroom and saw several bugs and had sent ME the video on snap and NO ONE ELSE!!! We ARE filming a show, remember that and Nene released this video herself! No one has EVER seen this video but RHOA!”

As for the party itself, Kim hasn’t commented, but she was there with her husband, Kroy Biermann. The two of them were dressed as the late Hugh Hefner and a Playboy bunny.