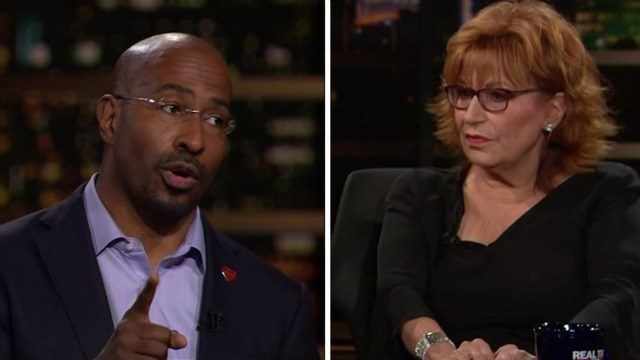 “The View” co-host Joy Behar blasted Van Jones of CNN when he tried to reason with her about trying to win over Trump supporters in a civil way. During the latest episode of HBO’s “Real Time With Bill Maher,” the comedian countered Jones, who said in the past that Democrats need to take the high road with Republicans instead of sinking to their level.

He said this advice came from Michelle Obama, who said during campaign season, “When they go low – we go high.”

Behar isn’t going for that, saying Dems need to “go for the jugular” like the GOP. “No, when they go low we should go lower,” she said.

“You’re the first perpetrator of this. He wants the kumbaya,” Behar said to Jones. “F*ck your kumbaya! These people on that side are crazy. Don’t you understand? They’re crazy! You don’t deal with white supremacists. I’m done talking to him, I’m talking to you.” Behar then turned back to Maher.

This is a sentiment that Maher himself has advocated in the past.

Jones defended his position, saying that Democrats need to win over Trump voters and the best way to do that is to talk to them.

“All I’m saying is we got a great circle that includes women and Muslims, everybody, Jewish people. We need to get the circle bigger to take it away from them. And I’ll tell you what, if you don’t go and we don’t go, the Nazis will go. And I’m not going to do that in my country,” Jones said.