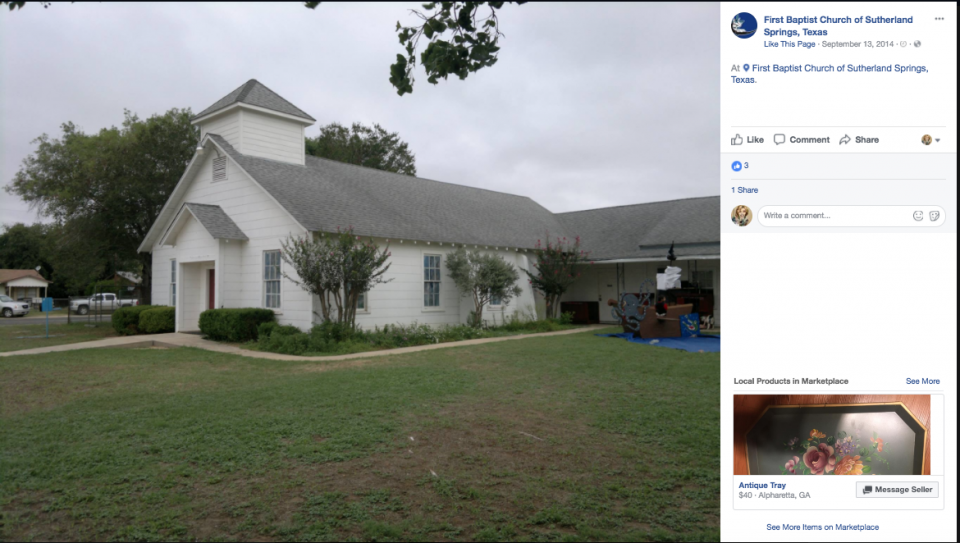 SUTHERLAND SPRINGS, Texas — A gunman stormed into a small church in this southern Texas town and opened fire, killing at least 26 people and injuring several more, some critically. One of the dead is the daughter of the church pastor.

According to ABC News‘ Max Massey, the shooting happened around 11:30 a.m. local time at the First Baptist Church of Sutherland Springs, approximately 40 miles southeast of San Antonio. The small church usually has about 50 parishioners, WLKY reported.

The shooter has now been identified as Devin Patrick Kelley, 26, of New Braunfels, Texas, CBS News stated. An unconfirmed LinkedIn account lists that Kelley had four years in the Air Force and a month-long stint as a teacher aid for a vacation bible school in Kingsville, Texas, about two hours south of Sutherland Springs. Most notably is the fact that he was dishonorably discharged from the military after getting a court martial (similar to a felony conviction in civilian life) in May 2014.

KSAT television station confirmed on-scene reports that at least 26 people have been killed in the shooting. Wilson County Commissioner Albert Gamez Jr. corroborated those numbers and added that several more are critically injured.

Neighbors say they heard shooter may have reloaded multiple times, around 50 people usually at service pic.twitter.com/tkAYMp2Y8A

Witnesses told first responders that at least 20 shots were fired, though police have not confirmed the exact number of gunshots that were fired. According to police, the gunman was killed after a short chase following the shooting.

Only one victim has been identified so far: Annabelle Renee Pomeroy, 14, the daughter of the pastor, Frank Pomeroy. The pastor and his wife were out of town at the time of the shooting and learned of the daughter’s passing from long distance.

Multiple helicopters have left the scene to transport victims to area hospitals. Agents from the U.S. Department of Justice, including the FBI and the ATF, are also on scene.

President Donald Trump, who is away in Japan, said he is monitoring the situation.

May God be w/ the people of Sutherland Springs, Texas. The FBI & law enforcement are on the scene. I am monitoring the situation from Japan.

Texas Gov. Greg Abbot tweeted that his prayers were with the victims and that an update from the Texas Department of Public Safety would be available soon.

Texas’ U.S. Senators Ted Cruz and John Cornyn both released statements via Twitter on the shooting, with Cornyn calling the situation “heartbreaking.”

“Keeping all harmed in Sutherland Springs in our prayers and grateful for our brave first responders on the scene,” Cruz said.