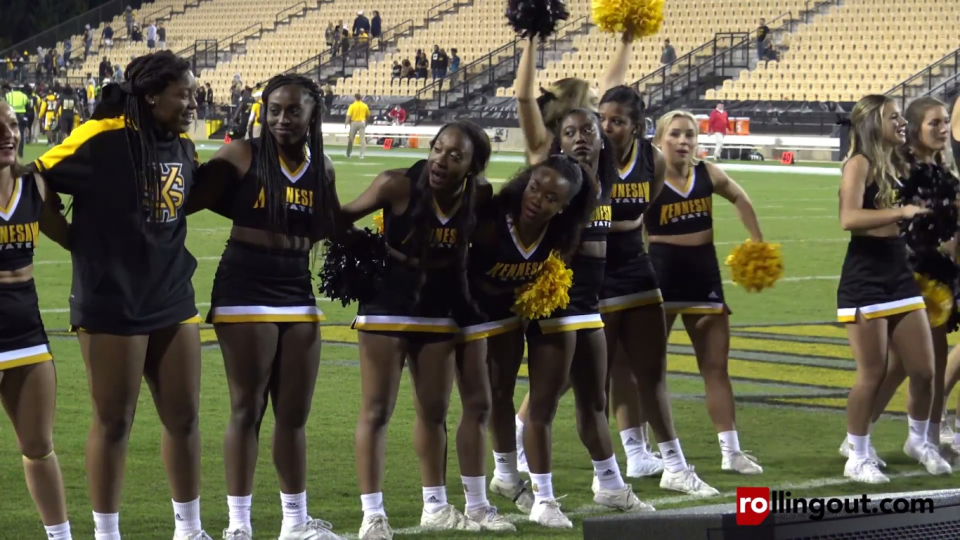 Kennesaw State University President Sam Olens issued a statement to students, faculty, and staff on Nov. 8 that the school’s cheerleaders, including the “#Kennesaw5,” will be allowed back on the field for the national anthem.

“I will stand during the national anthem to honor the women and men who have served in our nation’s armed forces,” Olens said in the statement. “While I choose this action, I do not believe that this debate has to be a choice between honoring veterans and protecting the freedom of speech. We must be able to do both.”

Five Black cheerleaders decided to kneel during the national anthem before a Kennesaw State home game on Sept. 30. In the following days, a column from the Marietta Daily Journal that highlighted Cobb County Sheriff Neil Warren’s response was published. Warren said that his wife had tears in her eyes after she witnessed the cheerleaders’ protest.

“Cobb County has lost sons and daughters at home and on foreign lands while protecting America,” Warren said, according to the column. “And to witness these ill-informed students acting this way clearly tells me KSU needs to get busy educating these students on more than just passing their classes. They need to learn all that the flag truly represents.”

Warren said Olens assured him that the protest “will not happen again,” according to the report. State Rep. Earl Ehrhart, R-Powder Springs, who chairs the committee that determines the annual funding for the university also shared his displeasure.

“I don’t care what political statement you’re making, even if it’s repugnant and hateful like the ones those cheerleaders made. Play football. Cheer. Play in the band. If you want to make a political statement, do it in the middle of the public quad and that’s your right in this country,” Ehrhart said, according to the report.

The university changed its gameday policy to having the cheerleaders stay off the field altogether until after the national anthem is played. A group of faculty and students showed up to the games solely to protest the anthem in support of the cheerleaders.

“Having so many people come out and actually take a stand with us when we’re being put in the back and can’t do anything, we really appreciate that,” Michaelyn Wright, one of the protesting cheerleaders, said in an exclusive interview with rolling out on Oct. 21.