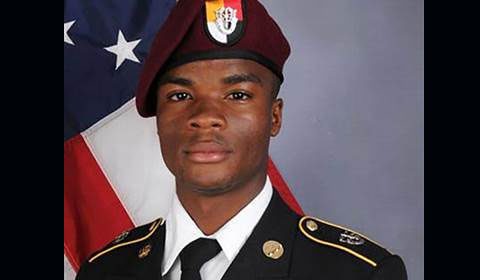 Last month, the U.S. Department of Defense announced the death of four soldiers in the country of Niger in Africa. The soldiers were ambushed with rocket-propelled grenades and machine-gun fire. One of the soldiers killed was U.S. Army Sgt. La David Johnson, a father of two with another child expected in January.

Johnson’s body was left behind when his unit fled and it took two days to recover it. President Trump called Myeshia Johnson to express his condolences on the death of her husband but in true Trump fashion, he turned into an insensitive jackass. According to U.S. Rep. Frederica Wilson, D-Fla, Trump had a five-minute conversation with the grieving, pregnant widow and told her, “he knew what he signed up for … but when it happens, it hurts anyway.”

But what Sgt. Johnson did not sign up for was to be left behind and captured by the enemy. According to the Washington Post, that is what happened to Johnson before he was killed. It was widely reported that the U.S. and allied forces in the area recovered Johnson’s body two days after the ambush. But, in fact, it was a group of children taking care of cattle who found Johnson’s remains in a field and alerted adults. A villager identified as Adamou Boubacar, 23,  stated to the Post that he saw Johnson’s body lying face down, and the back of his head had been smashed. Also, Johnson’s wrists were bound with rope, which may indicate he was captured alive by ISIS-backed militants. According to the US military unidentified, Johnson’s transponder was activated pinging his location for a time. Nigerien military forces actually retrieved his remains.

Army officials informed Myeshia Johnson that her husband’s body was too badly disfigured to be viewed when it arrived at the funeral home. Because Mrs. Johnson has been critical of Trump’s comments about her husband’s death, she has become a target of vile, hateful comments on social media.

The Trump administration has not given a full account of the activities of U.S. forces in Niger and other regions in Africa.