It looks like it’s time for champions of truth to break out their Keuring coffee maker or invest in their stock. That’s because Sean Hannity has gone hysterical after the popular coffee machine brand announced that it would be pulling ads from airing on Fox’s “Hannity.”

Intentionally or not, it appeared that Hannity was throwing his support behind Alabama Republican Roy Moore, despite the fact that he is accused of having sexually assaulted girls as young as 14. The allegations came from a Washington Post story and the Senate candidate appeared on “Hannity’s” radio show Friday to defend himself. Shockingly, he didn’t outright deny dating teenagers and instead said he “didn’t remember”:

HANNITY: Everyone would agree, 32 year old man pursuing a 14 year old girl is despicable and that’s something I think should transcend all politics. Roy Moore has however been in the public eye for 40 years a controversial figure for many of those years. Does everybody in this country have a presumption of innocence and a right to defend their name?

[…]
HANNITY: At that time in your life…Let me ask you this you do remember these girls would it be unusual for you as a 32 year old guy to have dated a woman as young as 17? That would be a 15 year difference or a girl 18. Do you remember dating girls that young at that time?

MOORE: Not generally, no. If did, you know, I’m not going to dispute anything but I don’t remember anything like that.

HANNITY: But you don’t specifically remember having any girlfriend that was in her late teens even at that time?

After the interview aired, several companies including Keurig were asked why they were advertising with Hannity and they responded saying they were pulling their ads. 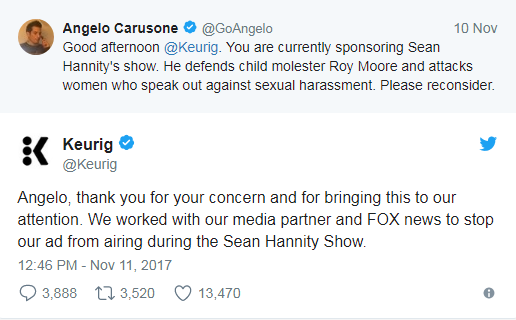 When the conservative set got ahold this news, they blew a gasket and responded by asking Hannity heads not to purchase Keurig machines.

.@Keurig made a decision to pull ads from the @seanhannity show.

This decision is disgusting, and will not be tolerated.

Regardless of any response, I am done with you, Keurig.

To take it that far over a simple disagreement means they need to seek some psychiatric treatment.

Since then, Kuerig supporters and Sean Hannity detractors have urged the public to buy up as many of the coffee machines as possible.

#BoycottKeurig because they have caved into liberal pressure and are pulling ads from Hannity’s show.

We will show them what over 100 million strong conservatives can do to their business.

Retweet and spread the word.

Thank you Keurig for taking morality over profit, something Trump, GOP, FOX & their twisted supporters don’t do. #BoycottKeurig #BuyKeurig

I started following @Keurig so I could soak up all the white trash tears from these Russian loving “Patriots.”

BUT angry @ Keurig for not supporting pedophilia 🤔#BoycottKeurig#SundayMorning#Resist

#DrinkKeurig all day, every day! The most delicious coffee you’ll ever have! Thanks @Keurig for stopping advertisment during the hideous Sean Hannity show.