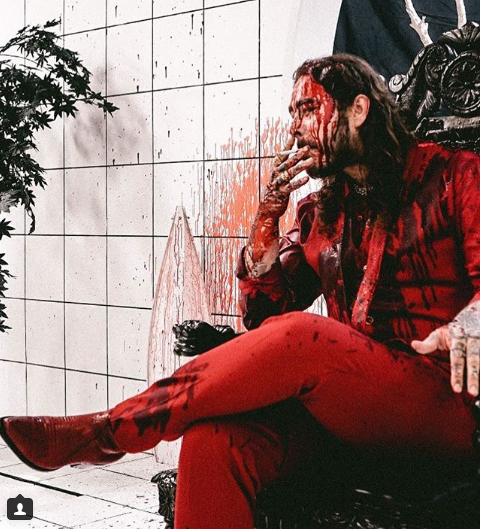 White rapper Post Malone enraged hip-hop fans and Black Twitter after a DJBooth article came out where he states that there’s no “real s***” in rap music currently. Post Malone said if listeners want something with substance, they should turn to some Bob Dylan or some form of music outside of rap.

“If you’re looking for lyrics, if you’re looking to cry, if you’re looking to think about life, don’t listen to hip-hop,” Malone told Warsaw, Poland media outlet NewOnce. “There’s great hip-hop songs where they talk about life and they spit that real s***, but right now, there’s not a lot of people talking about real s***. Whenever I want to cry, whenever I want to sit down and have a nice cry, I’ll listen to some Bob Dylan. Or whenever I’m trying to have a good time and stay in a positive mood, I listen to hip-hop. Because it’s fun. I think hip-hop is important because it brings people together in a beautiful, happy way.”

Post Malone boasts two top ten hits on Billboard charts in 2017 (“Congratulations” and “Rockstar”) so his stance for people to avoid hip-hop if they want substance rankled the nerves of rap disciples. Also, Post Malone is the one who pushes his pill popping songs onto the music masses and has his label backing him. So, who is he to discuss “substance”?

And if that’s not enough, Post Malone went crying to Rolling Stone, saying that he’s a victim of “reverse racism” after his allyship was questioned by radio host Chalamagne Tha God:

The most prominent such encounter came in 2015, when the radio host Charlamagne tha God took Malone to task, asking him, among other things, what he was doing to support Black Lives Matter. Malone’s answer, he admits, was insufficient: “I guess what I can do to help Black Lives Matter is keep making music. … I don’t know,” he replied. Looking back, Malone tells me, “I wish I’d said, ‘What are you doing for Black Lives Matter?’ Some sassy shit to shut him up. Like, maybe my music’s not the best, but I know I’m not a bad person, so you’re just being a hater.”

Malone shakes his head. “He’s not a good person. He hates me because I’m white and I’m different. But we’re still rocking and we’re still successful, and he can’t stop it.”

I tell Malone that, to my ear, Charlamagne was raising the issues, however confrontationally, of white allyship and cultural appropriation. Malone nods but says that, in his view, he’s been the target of so-called reverse racism. “People are gonna hate you for what they’re not gonna understand you for,” he says. He notes that he supports NFL players who kneel during the anthem. “It’s all about pushing for equality – in both directions,” he says.

Twitter was not happy with Post Malone’s statements after profiting off of hip-hop culture and let him know it.

spoken like a true vulture who only saw rap as a means of making money off a culture they do not understand on a fundamental level https://t.co/5IygmMmKGT

Having grown tired of being blasted to oblivion for being a blatant culture vulture, Post Malone defended himself in the most profane way. Check out his defense (warning: strong language) and see the response to Malone from other social media users, after the break: