Cardi B returns to stripper ways, exposes herself at party with fans

Unless you forgot, rapper Cardi B used to entertain “fans” in a different way back in the day. And just a few days ago, the “Bodak Yellow” lyricist gave new fans a taste of her previous life by exposing her reconstructed breasts during a party.

Perhaps Cardi B is sensing that the tremendous buzz she created in 2017 as the breakout rap artist of the year is starting to fizzle out. After the success of her first hit song “Bodak Yellow,” which brought her fame, fortune and awards beyond her wildest imagination for a debut song, she must believe her career is starting to lose momentum.

The bodacious Brooklyn, New York-bred beauty figured out a way to crank up the noise again, the entertainment publication claims. A new video just surfaced – of Cardi laughing out loud as she proudly put her breasts on full display.

While her face was barely seen, but it’s believed that the woman in the video was Cardi B. 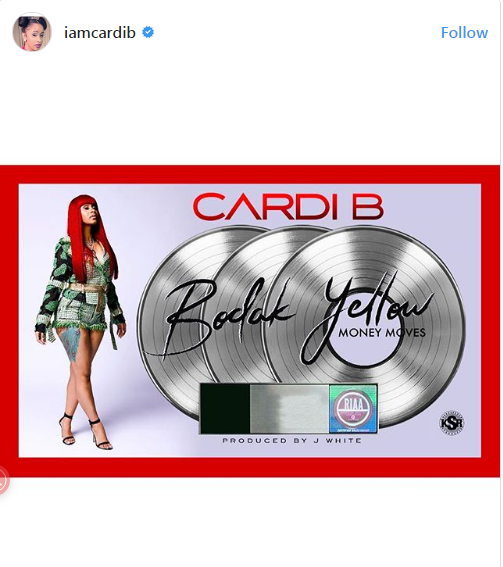 “I’m so thankful .This song change my life and help me change a lot of people around me life’s,” she captioned under the above post. “Thank you all for your support .Next single comes out early December ?￰ﾟﾒﾪ?!!!!! #BODAKYELLOW”

Most fans know that Cardi recently got engaged to her boyfriend Offset from the hit ATL rap group Migos. He proposed to her onstage during Power 99’s Powerhouse concert in Philadelphia on Oct. 27.

In footage videotaping the proposal, Offset got down on his knee in front of some 19K people to pop the question. He showed Cardi the diamond ring, and she said “yes.”

Rumor has it the pair got engaged last summer, but she quickly debunked those rumors, saying she wouldn’t pressure him to pop the question.

“I’m a woman. Every woman, I think, wants to get married and wants to have children. It’s never too early to get married now. You know, if you want to propose to me, you can,” she said during an interview at the 2017 MTV VMA pre-show.

She added, “I don’t gotta put the pressure, you know what I’m saying? I put it down. Ain’t no pressure, baby!”

To reignite the engine powering her burgeoning career, Cardi B said she will release a new single in early December to follow the monster success of her Billboard chart-topping debut hit.