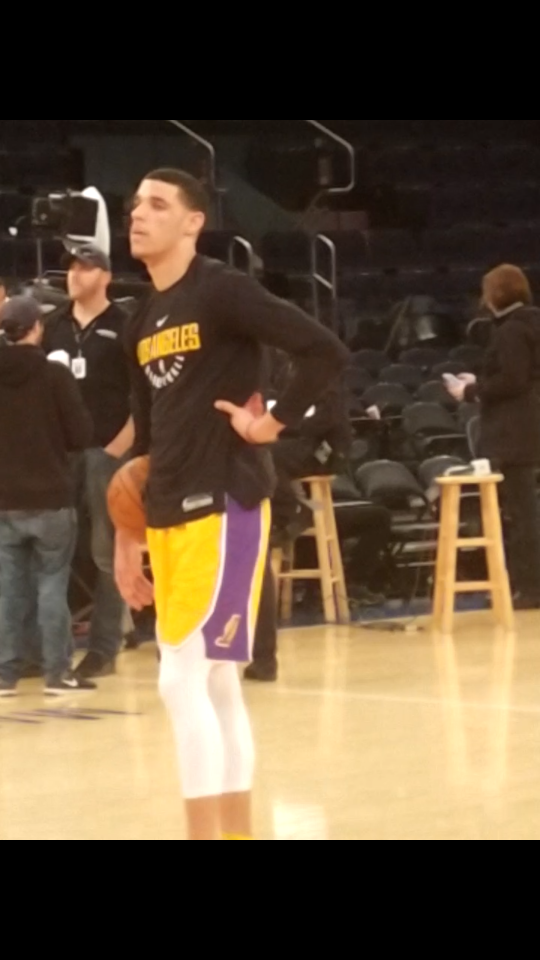 With only five points at the half, Lonzo came out cookin’ in the second half, scoring 10 points in the first eight minutes of the third quarter, including a pair of threes and a vicious dunk that had his dad dancing and taunting Spike Lee courtside.

To slow Lonzo down, the Knicks brought in their 19-year-old rookie Frank Ntilikina with 4:04 left in the third quarter and the French rookie shut him down. Lonzo would go on to score only two more points in the rest of regulation and overtime, knocking down two of three free throws on a questionable foul call.

Spike Lee would get the last laugh, as the Knicks went on to win in overtime, 113-109. Lonzo had plenty to say about the game in the Lakers locker room.

“It was a lot of fun,” Lonzo said. “It would have been nice to get a win but it was very eventful.”

“He’s very tough to guard and he was good tonight,” Lonzo said about Knicks star Kristaps Porzingis. The Latvian known as “the Unicorn,” was better than good, leading all scorers with 37 points on 14-26 shooting, grabbing 11 rebounds, blocking five shots and nailing five threes.

Lonzo was also complimentary of Ntilikina after the game.

“(Ntilikina) is a great player,” Ball said. “He’s young like me playing in a big city.”

The Knicks were impressed by Ball, as well, and discussed his game after the win.

“I think Lonzo is awesome,” Michael Beasley said. “He’s a great point guard. He makes great decisions, he pushes the tempo and has those guys playing and having fun. He needs to work on his shot in the summer but other than that he does a lot of things great.”

The Unicorn also had praise for Lonzo.

“I like his game,” Porzingis said. “He passes the ball really well. He makes it easier for his teammates. He’s not selfish at all. He definitely showed up tonight.”

Lonzo did show up, but so did Knicks rookie Frank Ntilikina, who contained Ball for the rest of the game. Still, the matchup between the two biggest cities in the country with two young, talented teams led by rookie point guards was perhaps a glimpse into the future. And for Knicks and Lakers fans alike, the future may be in good hands with rookies Lonzo Ball and Frank Ntilikina.